by Amee K SweetMcNamara 6 months ago in art

Artists and Craftspeople love Beauty. Beauty may manifest as colorful, dramatic, whimsical, provocative, clever, or even just damned adorable. Very few of us set out to make Ugly. Consequently, our Facebook posts and Tweets, Pinterest pins and Instagram accounts show only the brightest, shiniest facets of our creative lives, and end up tending to look like the carefully-collaged “dream-boards” of fifteen year-old girls; all of the glitter none of the grit.

But it’s a gritty life, this surviving-by-your-creative-wits business. It’s full of stress and heavy-lifting, fiscal fears and sudden, unpredictable set-backs. But—when you’re grinding away in the air-conditioned cubicle of your soul-sucking corporate job, dreaming of a more creative, art-filled life—those realities are not represented in the visual smorgasbord offered in the psychological crack-troughs of craft-driven social media. You see only the bright and shiny facets—none of the smudged, scratched, or broken ones.

Take, for example, this lovely, jury-ready pic (above) of one of my most recent creations; “Glenora” is a hand-blocked, wired, and trimmed fur-felt top-hat. Truly one of my most favorite things I ever made. You’d Pin that to your millinery-inspiration board, right? I would.

Making it is pure, unadulterated bliss.

Selling it can be something else entirely. 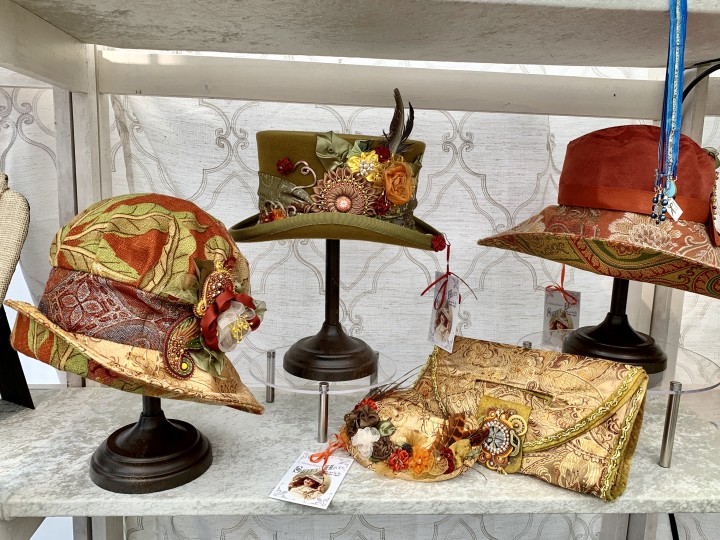 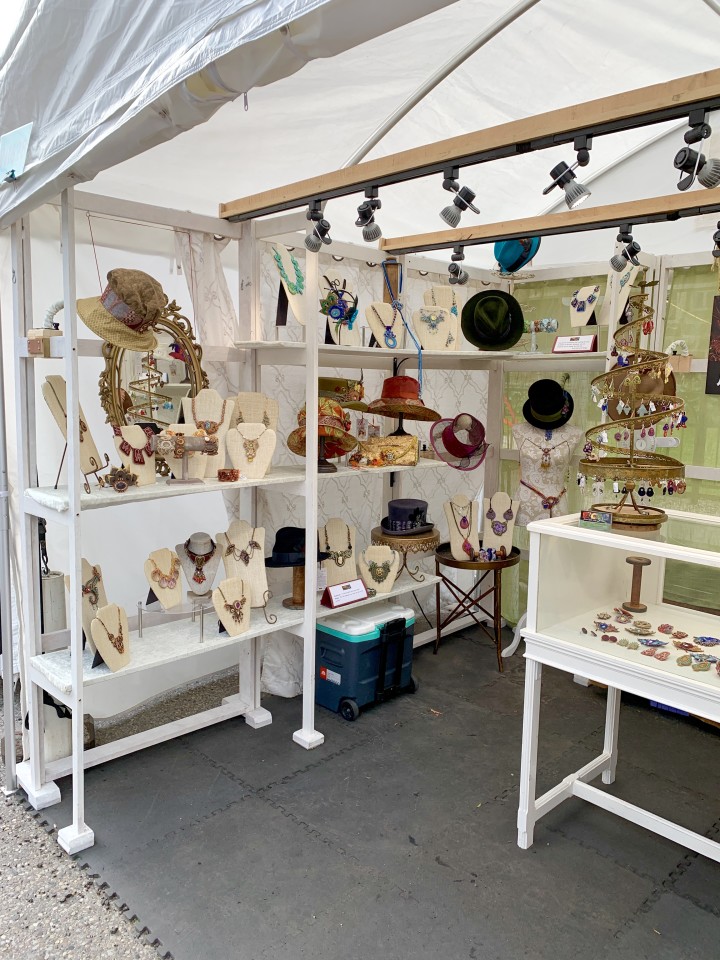 Glenora sits on a shelf with a few of her friends. Booth is looking good here at the opening of the 2019 Ann Arbor, MI State Street District Art Fair.

This fair combines with three other fairs to cover dozens—literally DOZENS—of city blocks, forming one of the largest art and craft festivals in the country. Artists and Craftspeople travel from both coasts to participate and—between application fees, booth fees, fuel costs, hotels and meals—they invest thousands of dollars each for the privilege.

And what do we get for our thousands of dollars? Well, it varies from show to show but—basically—a 10’ x 10’ square of space on the broken, pitted pavement of a city street. And maybe an electrical outlet. And promoter-employees snapping at our heels during load-in like amped-up Corgies, trying to hurry us to get our vans and trucks and trailers unloaded faster, to get our vehicles pulled closer to the curb so that other vehicles can pass by on the now-impossibly-narrow tent-and-booth-lined street. My fellow artists and I clamber impatiently over and around each other, a sea of asses and elbows swarming to the cacophony of clanging tent-poles, and the smack-thud of storage containers being dropped onto the pavement. There is the occasional altercation between one of Us and one of Them—a promoter-employee who’s pushed too hard or—worse—a Civilian—one of the thousands of people who actually LIVE in this city and have the unmitigated temerity to continue doing so while we are clearly trying to Do This Huge Thing. They walk and jog down the middle of the crowded streets, ride their bikes and walk their dogs around the piles of crates and boxes and tarps stacked up on the sidewalks, and are generally as annoyed by our presence in their neighborhood as we are by theirs.

But the rest is up to us. Oh, the promoters will tell you that they’re paying zillions of dollars to coordinate and market the event but—at the end of the day—it's a fairly bare-bones exchange.

And the results? Well, that can depend on a lot of things; the promoters’ commitment to marketing and organization. Accessibility. The reputation of seasoned artists attracting their existing customer base. But honestly? The big deal is weather. We live and die by the weather. 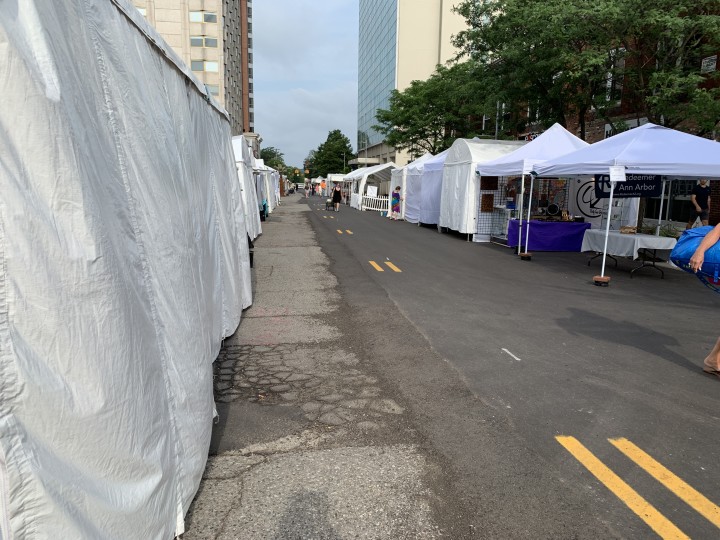 See those tiny people trudging up the street? Those are other artists and craftspeople. They are trudging because—while we don’t officially open until 10:00 AM—it is already 91 degrees outside. And it’s predicted to reach 97 by two PM. Tomorrow too. With about eight-billion percent humidity. How many people want to try on my beautiful felt hat while standing in a vat of their own sweat-stew? And do I even WANT them to? Probably not.

But the heat will break. It will break when the thunderstorms roll in. At least, that’s how it worked yesterday. At about 2:45 PM, a “popcorn storm” (as my retired air-traffic controller cousin refers to them) arrived on Oz-worthy winds under skies that darkened as suddenly as a refrigerator lightbulb when the door slams shut. Vendors raced to lower tent walls, and zip flaps while sideways rain pushed product off of shelves and into rivers created in just moments by the resulting flash-floods.

Craft-Show Truths I Am Evidently Fated to Learn the Hard Way - Lesson #237: The presence of a gutter in the street behind my booth - while SUGGESTING a predictable path for the flow of rainwater during a storm - does not GUARANTEE the same.

My favorite part was how the wind actually pushed my booth hard enough to dislodge the Velcro strap with which I had secured my electrical connection. The whole power-strip fell off and was submerged under about six inches of rushing water. In truth, the results were a bit anticlimactic; the breaker tripped. The lights went out. No sparks. No flames. No earth-shattering kaboom. A bit disappointing really.

I’ve got three more days of this nonsense before a grueling four-hour break-down/load-out and a 700+ mile drive back home to New Hampshire, my tail most likely tucked between my legs. I’m not ruling out a miracle between now and Sunday night, but somewhere between optimism and pessimism lies reality, and it’s feeling like a glass-half-empty kinda weekend. 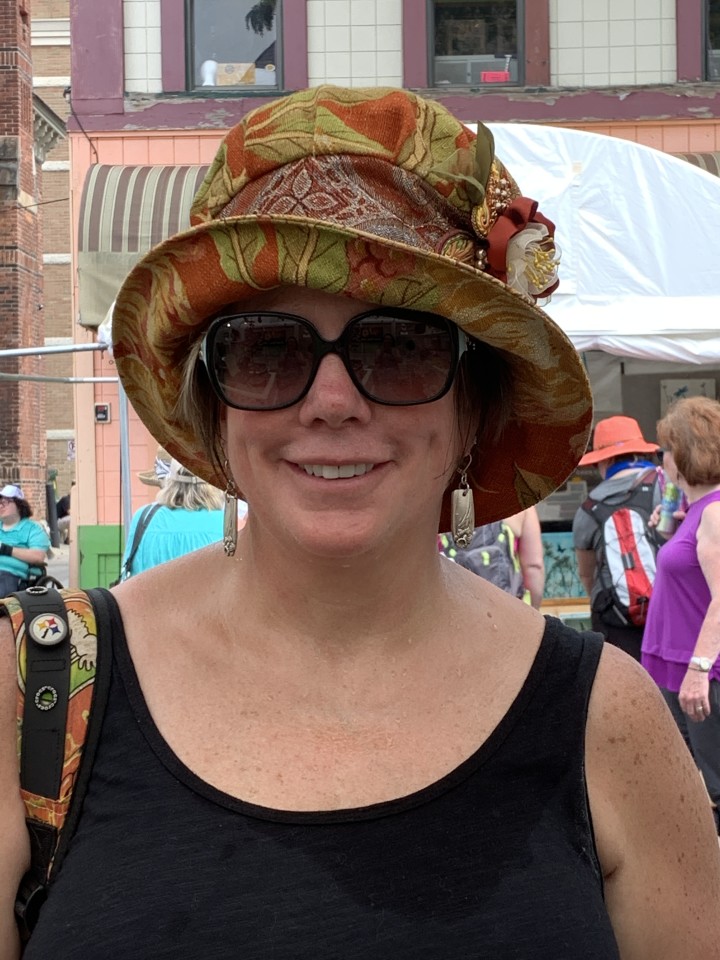 But the great thing about not expecting a lot is that I’m frequently pleasantly surprised. Here’s a customer that just came in. She’s clearly bathing in perspiration, but she tried on a hat. And then she bought it. Will wonders never cease?

So, I promised you truth. Not the happy, Photoshopped version of my “creative journey” set to new-age piano music... just the real, honest-to-God, I-feel-like-I’m-being-slow-roasted-in-a-vat-of-my-own-body-broth reality... trying to make a living for myself on the road as a gypsy artist. And as long as I’m not actually falling-off-the-bone tenderized in a steaming soup of my own sweat by the end of this show, I will most likely live to sell (and write) another day. 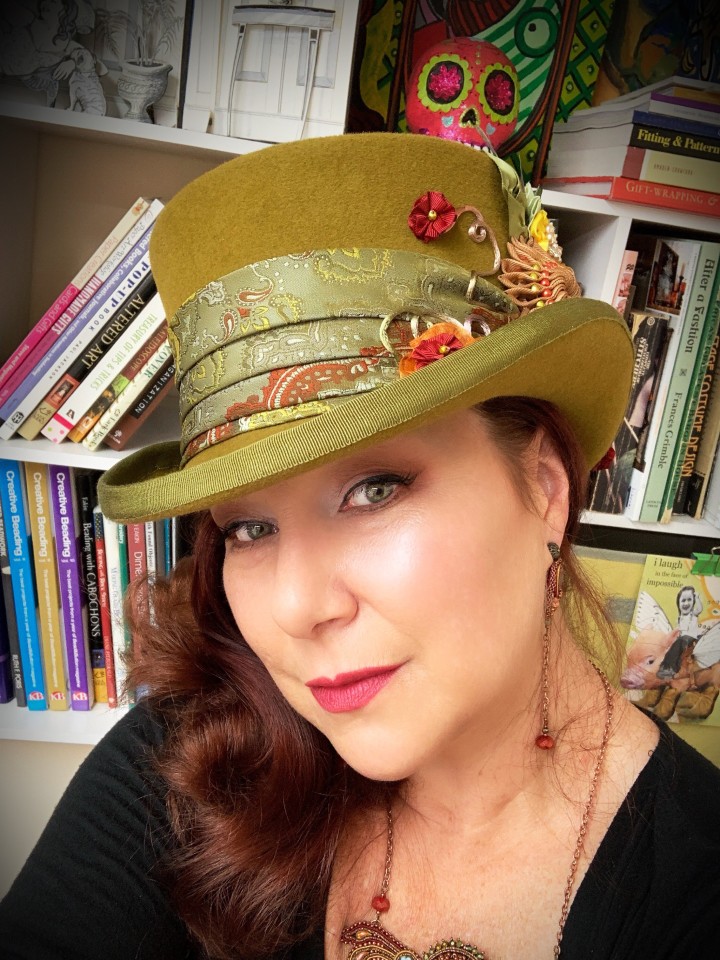 Ask Amee K. Sweet-McNamara why her textile-art business is called “Amee Runs with Scissors” and she’ll usually just smile and say, “Because it sounds a whole lot sexier than ‘Amee Eats Paste.’”