Hopes For The Future

by Rose M. 6 months ago in politics 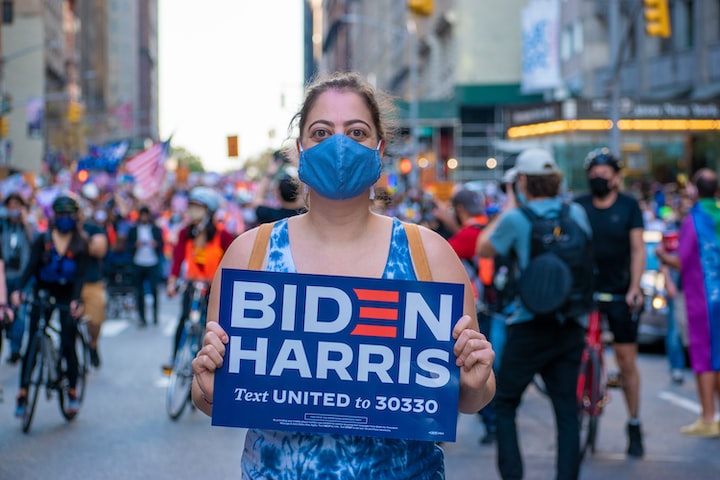 Photo by Rom Matibag on Unsplash

Well y'all it is official we have a new president elect of the United States of America. The nation is dancing in the streets sighs of relief are heard in every house, well most homes. Unfortunately, the nation remains divided over this presidential matter even though it is over, the race has ended. While, I personally am very neutral on the president, I do have hopes and opinions on what I would like to see happen in the next four years.

Firstly, I want this nation to unite, we are acting like children when the problems this nation are facing need adults. And I don't just mean an adult running the country, I mean putting childish differences aside and moving on and handling the countries issues united. We are in a Pandemic one that many countries have already handled and gotten under control, we are the only first world country that has such high numbers this late in the game. Another form of uniting is setting aside personal opinions and uniting on issues that should take precedent as they impact the future of America. Police brutality, limited education, and the injustice of Native woman going missing along with the immigration tensions, all these matters need to take front seat. It is not tied directly to todays economy nor does it help bring jobs and creates new laws to protect people. All of these issues already have laws in place to get these problems fixed, those laws are just not being followed due to loop holes and a loose and broken justice system. Police brutality only keeps reoccurring with little to no repercussions on the police side because of their protection. Their lives matter too and I fully support that as their job is a risky one and several do lose their lives, but since when do they take the position of the judge and jury and executioner? Since when is the people that get murdered, since when is their lives worth less or nothing at all? It shouldn't matter their skin or their fashion or even what crime they committed, we are America because the British used to do the same to the early settlers, sparking a revolution to ensure that everyone gets the full equal right to a fair trial. That fair trial is to be performed by a judge not someone who works a job to bring in the people to get to that trial that would determine if they are even guilty. But as with all issues it breaks down to the simple concept of lack of education, if more things were educated then more people would have an equal playing field. Most of the nitty gritty facts of American and world history is taught in further education ventures, which is nice, but doesn't benefit almost half of Americans. Whom, either don't achieve a higher education or they attend a focused trade school, which is equally as good as anything, but it locks a group of people out of the truth. Many can't name important events or either have a misinterpreted version of events, which leads to the majority of education to come from parents and familial sources. This only keeps the old mindset in a new world and severally impacts current situations in a negative light. Those old world mindsets are preventing many situations that could be solved, one being immigration, the old fear that immigrants only bring drugs and destruction is old world racism.

While I could write a twenty page essay on how immigration is the back bone of America and we have come so far due to immigration, I will try to keep it within a reasonable amount of words. Other countries aren't as fortunate in opportunities as America is and it is important to note that those opportunities came from immigration, immigration that lead to a lot of deaths of the people that already lived and grew this land. Those same people are fearing for the women's lives as they are faced with widespread kidnappings and murders. A problem that should have been addressed the instant there was a pattern, the instant it wasn't just a stalker being a psychopath. So, my hope is that those social problems get better to improve us for a better future here in America.

Secondly, my second hope for the next four years is that we all grow as a nation and understand that the politics should not control our day to day lives. Including the fact that we should not let it get us down, at the end of the day we are free to choose where to live and what to put up with. That being said nothing in politics is ever permanent and can change in four years, so it is good to work on the more permanent changes of changing the mindset of those through education. As well as understanding that everyones opinions are valid even if you do not agree with them or they are hurtful, because at the end of the day everyone in America does have the right of free speech, however I believe that there should be an edit against racist speeches as those can be very hurtful and spark violence.

Thirdly, I would like to see more disqualifications in the presidential race, we are in the 21st century we should not be allowing shady skeevy people run this country. Far more people are educated and far more people are just a qualified to do the job, but get cut out cause they aren't a member of the old white members club. And while we do have a wonderful change of pace with Obama and Harris, we must not forget that the country is still mainly controlled by old white views and standards. Its time to rebuild and remake the country in a way that this new world needs and is warranted.

I hope to see a deep and hopefully eye opening change, but even if it happens in a time that I no longer am able to witness it at least it started with this generation. With this decade, hopefully it will become America the Land of the New and the Open, whether we see it or not hopefully our future generations do.

politics
Rose M.
Read next: Why Denny's Is the Perfect Starter Job for a Cook
Rose M.

Rose grew up in a house inspired by her mom, who is an amazon bestselling author, and encouraged by her father. She always held great interest in both history and all things lifestyle. Her goal for Vocal is to express her opinions.