by Rachel Paris Wimer 4 months ago in dating

A Dream in Red 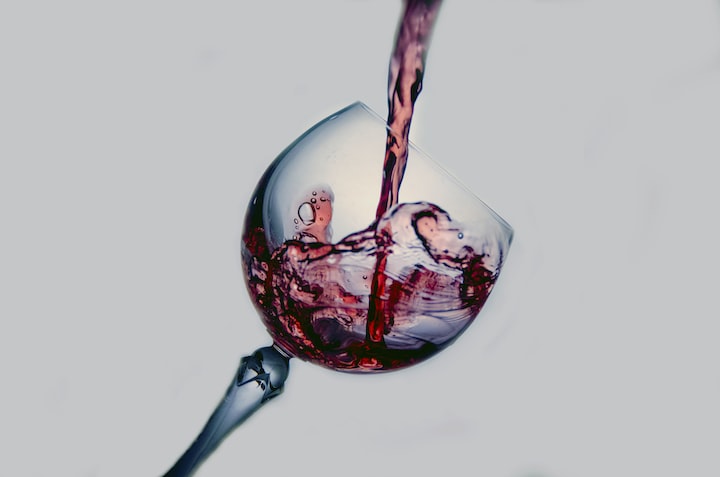 Photo by Terry Vlisidis on Unsplash

Grace lounged on her plush crimson sofa. She absently ate cherries from a bowl on her coffee table, relishing the last fruits of the season. The dark red juices left sweet traces on her full lips as she twirled a stem between her thumb and her forefinger. Her gaze fixed upon the white canvas on the easel in the middle of the room, the easel’s thin wooden legs dividing the room into unequal parts, like the way her mind felt divided and separated and pulled apart.

The problem, Grace determined, was the room itself. Too much color sprang out from the drapery, the Persian rug, the rosy lampshades, and the rich Kandinsky prints on the creamy beige walls. She could not even begin to fill her own canvas with purples or reds, because the whiteness of the canvas seemed refreshing. It was beautiful, really, so crisp and clean and totally pure from pigments, stains, and shadings.

The sleeves of Grace’s plum-colored blouse fell back to reveal smooth, white arms when she lifted one to brush back a faded auburn curl from her forehead. She gazed at her bare forearm and marveled at the lucid skin. She could make out the violet and turquoise lines that veined like tributaries of a river at her wrist and flowing in a long thin line all the way to her jointed elbow. If only the cloth-canvas instead was taut skin, so it could transparently reveal all that lay beneath its surface. If only it possessed life in its fibers and she could draw blood from beneath its epidermal layer. The spilling color, a deep rich red, would be so lovely and glistening on the white canvas.

She was listening to a dark, haunting opera, Henryk Górecki’s Symphony No. 3, Opus 36, composed in 1976. The year she had met Miguel. She pulled the golden chain on the Tiffany lamp on the mahogany end table beside the couch. She accidentally knocked over a picture frame and didn’t bother to stand it up again. She almost hoped that the glass had cracked with the impact, because it reminded her that things broke. Very few things are permanent; most things eventually fall apart. She closed her eyes, red with tiredness, and let her body sink back into the cushions. This music could only be listened to in near darkness, the swelling waves of sound intensified.

Grace had turned fifty exactly two months earlier, perhaps shy ten minutes or so. It was 11:50 p.m. and she could sense her body growing older with each passing minute. She felt as though she would be one hundred years old by the time the clock shifted to its midnight stance.

She reached forward to the coffee table and poured herself her second glass of Merlot. The first glass lay shattered next to her on the floor, its contents in a pool, now soaking into the oak floor. She enjoyed the sound of things breaking, things spilling. She watched the burgundy liquid darken the clear wineglass. She loved the sound it made when she poured it and loved to hold a glass of it in her hand, cupping the base to warm its contents to body temperature, the temperature of blood.

And still, the canvas remained.

She had too much inspiration, too many ideas and images and thoughts that she could not separate them enough to understand one alone from that web. The movement in the music, Lento: Sostenuto Tranquillo Ma Cantibile made her think, sueño, sueño, sueño. She fell into a dream.

She met Miguel in New Mexico in the autumn of 1976 in a café in Taos. She had been sitting alone after her disappointing art show at a gallery in the city and he had ordered her an espresso made with Mexican Maragogype. It was the smoothest coffee she had ever tasted and so she let the stranger ask her out to dinner. They ate spicy tamales in a cozy restaurant until they thought their stomachs would burst, and then they walked through an outdoor mercado.

Sangre de Cristo, the Blood of Christ Mountains, grew dark and shadowed as the sun sunk behind their height surrounding Taos. Dusk gently softened the air as they strolled around the vender’s carts. Miguel stopped to buy a bag of tangelos, a delicious hybrid the size of grapefruits with tangerine sweetness.

He made her sound out the word until she pronounced it correctly.

“Los labios, cómo ese,” he instructed her. She glanced up at his mouth, seeing him shape the word, “Tor-”

“Toronja.” She said with a smile, and he bent down to kiss her open mouth. Soft and gentle while passionate at the same time, Miguel took her heart at that moment and left nothing in its place.

They peeled the fruit as they walked along, she in her long maroon silk skirt and he in a dark suit that matched his eyes. Later she remembered dropping the pieces of fragrant rind, aware that she would not believe this dream, if she did not leave behind some tangible evidence that they had been there, that evening, together. She remembered looking behind her right shoulder at the pale orange scattered upon the red brick sidewalk, her long, bright auburn curls veiling her face from his view.

She replied softly in his language, “Ese está un sueño anaranjado,” as she absently dropped two bright pennies into the case of a guitarist on the sidewalk as they passed his music by, in favor of their own. This is an orange dream.

“Here. This is for you.” Miguel took her hand and placed in her palm a flower he had made out of the peel of the fruit.

“Your life, now, is orange, brilliant like this. You are young,” he said.

She lifted it to her nose and smelled happiness.

Grace did not do this. Meet a total stranger and melt away. But that night he took her to the most beautiful place she had even seen. The house glowed like the Taj Mahal, complete with a reflecting pool shining in the moonlight. A pair of white swans swam gracefully about, Grace’s breath catching at such elegance.

“Bienvenido a La Cisne, la casa de mi familia,” whispered Miguel, as he opened the large double doors for her.

The whole place seemed swanlike, large, spacious, and gleaming white. At the center of the house there was a garden. Miguel took her hand and gently led her around the fragrant blooms.

“My father only has white flowers in his garden.” Grace’s eyes took in the sight before her. White roses, white lilies, white violets, and every kind of flower one could imagine—all in white.

“My life is blanco—a blank canvas. You are a painter and I want my world to be a painted with many colors.” Miguel smiled at her.

So, that night she took his white roses and made them red. To her, he seemed to be a perfect fit, her head cushioned on his broad shoulder, two beautiful heads together seemed better than one. Her Spanish was limited and although his words were poetry, he seemed to keep his real thoughts deeply hidden. At that moment, she felt content to be the artist for his needs, she had a vision for their lives. The next morning, she turned over in the massive white bed they had shared, drinking glasses of Merlot in bed until dawn, and found only the shell that his body had made. He was gone.

When he rang the bell of her apartment a year later, something about him had changed. She wondered if it was his eyes, they seemed lighter now. But eye color doesn’t really change, just the light that is reflected into them. His firmly shaped lips told her that he had purchased a small, but prominent vineyard and had moved to Southern California. He had brought her a gift of a bottle of Southern California Merlot, from his vineyard. He did not stay long, but it was time enough for her to weigh their successes and failures— she had lost. He was standing before her, but all she could remember was how he left her before. In the end, he had not liked her paintings, or the fact that she had no money or stature. It seemed even more apparent now. She knew he did not speak her language, that he had once seen her as glowing orange. She had become rusted in his absence.

That was twenty-three years ago, and she still remembered Miguel. Why? Perhaps because it was now the cusp when September gives way to October and naïve green leaves turned blazing, passionate shades of red. Maybe it was because she had lived now for half of a century and the fraction of her mind in which the past swirled was increasing. Maybe because colors now gave her a headache and breaking glass was music.

The clock chimed twelve times, and Grace did not hear it because she had fallen asleep. The room was drunk with the smell of wine as it permeated the dense air, and she hugged the burgundy pillow close to her breast. A tiny lamp that still burned cast a red shadow across the empty canvas, all that was left, un sueño en rojo. A dream in red.