The other day I noticed that my shampoo bottle claims that its contents were "not tested on animals." 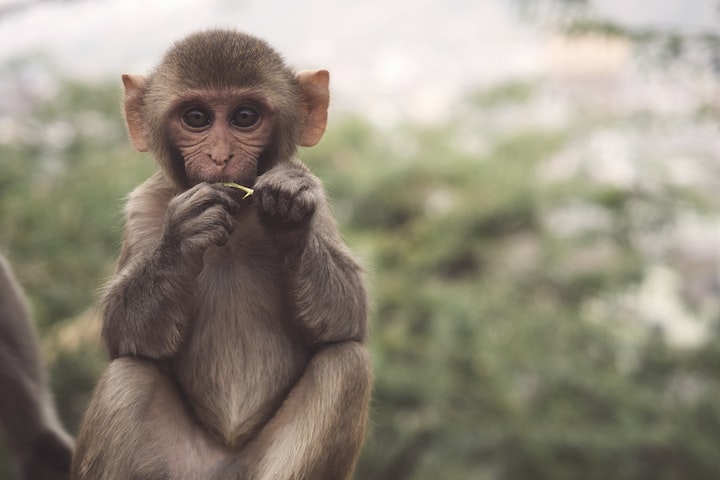 Photo by Patrick Beznoska on Unsplash

This should make me feel good, I suppose, but as usual I thought too hard about what that statement meant exactly, and ended up irritated, confused and wrinkly.

I think the controversy about animal testing arises from a misunderstanding of the word 'testing.' To me, 'testing' something means using something in the manner it was intended to be used, to see if you get the desired result. So to test shampoo on a monkey, you would first shampoo the monkey's hair, then rinse the monkey, and finally smell the monkey to see if the monkey still smells like a monkey. If, rather than smelling like a combination of monkey sweat and poo, the monkey now smells like a combination of strawberries and wildflowers, then success! Otherwise, it's back to the lab again, yo.

So while you may hear horror stories about how scientists smear shampoo directly into the monkey's eyes to see how they'll react, I think that such cases are probably rare, and result mainly from inadequate training of the scientists. I think the scientists just need to be told what shampoo is actually for, and that they can assume that having shampoo smeared into your eyes (or your monkey's eyes) is going to hurt like hell, so they don't really need to test for that. I suggest giving the shampoo testing scientists the following checklist:

The first box is already checked, so they'd be like, "Oh, that's right, I don't have to worry about that one."

I also think that the animal rights activists haven't thought through the ramifications of not testing products on animals. If we can't use human shampoo on monkeys, then what are we supposed to use to clean our monkeys? Monkey shampoo, right? Well who do you think they test monkey shampoo on, genius?

I suppose it would be fair to test human shampoo on monkeys if we also tested monkey shampoo on humans, but that seems kind of arbitrary. If we're going to start randomly testing our hygiene products on the wrong species, then I don't see why the higher primates have to take the brunt of it. Maybe each species should be allowed to pick another species to stand in for it during testing. So humans could pick monkeys, monkeys could pick dogs, dogs could pick cats... all the way down to the animals that don't know any better, like the dung beetle and people who watch Desperate Housewives.

What it comes down to is this: Every product is tested on somebody. If your shampoo wasn't tested on animals, then guess what? It was tested on humans. There isn't really any alternative, is there? If the first bottle of XYZ Shampoo rolls off the assembly line without XYZ Shampoo ever having touched the head of some animal, then you the consumer are the lucky animal who gets to test it. (Although if the product is named XYZ Shampoo, then there's a good chance that there are some monkeys working in the marketing department, because come on, put some effort into it.)

Alien #1: Not yet. They're still in human trials, but I hear from an inside source that the results are very promising.

Alien #2: Sure, what the hell. There's nothing like getting in on the ground floor!

But I suspect that space aliens are hard to find, and the ones I've seen don't seem to have much hair. They've got big eyes, so you could do the eye-smear thing, but then what? And of course there's always the risk of retaliation resulting in planetary annihilation, which is a big price to pay for lustrous curls and extra bounce. So that leaves us with humans.

Now I'm not necessarily opposed to testing shampoo on humans, but it doesn't seem like an improvement over animal testing unless (1) The data is more useful because the testing subjects are more similar to the intended users of the product, and (2) I get to pick the humans.

I would start with the crowd down at the bus station, and move onto any guys wearing girls' jeans or wearing their baseball caps sideways. And for the latter two groups, I'd require the eye-smearing test on principle.

Of course, technically humans are animals. There is, in fact, only one thing that separates us from the animals: the ability to sue other humans. The fact that humans can sue if something goes horribly wrong makes them very expensive test subjects, so product manufacturers have a pretty big incentive not to waste them. I mean, monkeys probably aren't cheap either, but I bet you'd have to kill a good seventy-five monkeys to do the same amount of damage to the company's bottom line as giving cancer to a single Desperate Housewives-watching human. It's not fair, I know, but that's the kind of screwed up culture we live in.

In reality, though, it seems like these test animals have it pretty good. Can you imagine the kind of conversation that would go on between an escaped test animal and his wilderness-dwelling cousin?

Wild Monkey: Hey man, where you been?

Test Monkey: Dude, I got tranq'd and carted off to a shampoo testing lab.

Test Monkey: Yeah, I got shampoo'd like six times a day. I smelled like freaking strawberries and wildflowers.

Test Monkey: Yeah, and that was bad enough, but then some FNG smeared shampoo in my eyes. My EYES.

Test Monkey: Yeah, I had enough of that, so I escaped. So... what happened to your leg?

At least these animals are getting food and shelter from the scientists, which is more than I got for buying my inadequately tested shampoo. I actually had to pay them $2.95 for the privilege of finding out whether their product gave me some kind of horrible rash. If you think about it, it's the humans that are getting screwed here.

I say that if manufacturers aren't going to bother to go through the due diligence of animal testing, they should be required to pay the first couple hundred humans who try their product. Besides helping to ensure that our shampoos are properly tested before being sold in stores, this system would also open up employment opportunities to individuals who might otherwise not be able to find jobs. I'm speaking, of course, of the chronically dirty.

Just imagine what would happen if a shampoo manufacturer sent a bus through the seedy parts of town offering free shampooing to all of the homeless people, in exchange for a warm meal, a bed for the night, and signing a release form waiving them of any liability. Best case scenario, you'd have a lot of clean, well-rested homeless people who smell like strawberries and wildflowers. And even if things go horribly wrong and they all die of cancer, at least you'd have fewer homeless people.