This Green and Pleasant Land

A taste of a dream 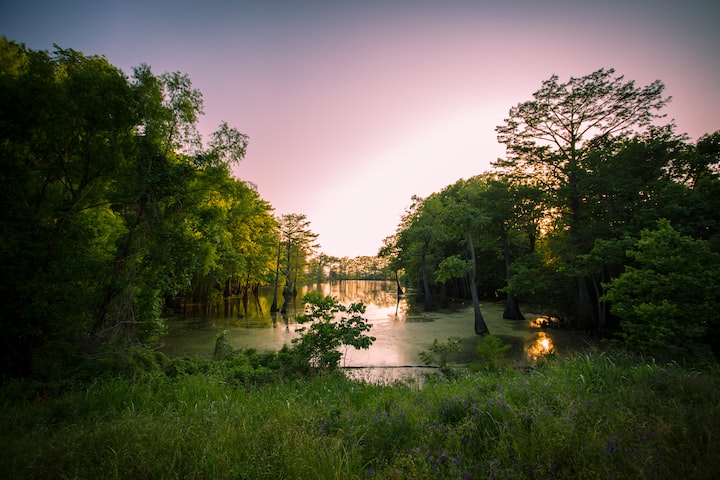 To connect to the beauty of a world unspoiled by humans you have to rise before the dawn. It’s a fact George muses on as he dresses silently, grabs his equipment and slips out of the house. He knows he must escape before he is tied in for the day by the responsibilities and expectations of the life he has chosen. He will return in a few hours with coffee and baked croissants for his partner, who will wake and expect him to participate in the routine of a normal life.

He crosses the road and enters the park, the fuzzy blacks and purples of the night barely slowing the pace of the man who has walked this path a hundred times. He reaches his spot next to the pond, sets up his easel and waits.

There is an audible hum as the first few beams of light make it over the horizon and the colourless night begins to slip away. It is the fabled golden hour when objects gradually adopt their colours for the day, each sun ray strengthening the vivid boldness of the greens, yellows and blues.

He observes at first, then gradually becomes lost in his art. A dragonfly buzzes. A blackbird flits and dips into the surface of the pond, shattering its glassy cover. Soon he is in flow, each brush stroke capturing a detail previously not scrutinised. When you really look, unexpected colours are everywhere.

The occasional jogger and pyjama-clad dog walker pass by, but otherwise George works in peace, uninterrupted. He becomes aware of someone observing him from a short distance behind. He pauses and glances over his shoulder. There’s a boy sitting on the ground, thin, fairly young, he looks tired.

“Morning!” the boy replies, beaming. George turns away but senses the boy shuffling closer to him. “I like your painting.”

“I like the way you add in the colours, one at a time. The pale blues there and then the blacks on top.” The boy is close now, his chin almost leaning against George’s shoulder.

“I’ve never had any paints, but I do like to sketch.”

“Yeah, charcoal mostly. I have a book full of drawings.”

“Very good. Do you have it with you?” The boy nods and pulls a battered sketchpad out of his back pocket. “What’s your name?” George asks while he waits.

“You do seem very worldly for your age Miro.”

“I’ve seen some things,” he points to a sketch in the book, “That was my family home in Syria, before it was destroyed.”

George takes in the fine black lines and shading which bring to life the two-story house on the page, “I’m sorry about your house. It’s a very good drawing.”

“It’s ok. That one is my school. That’s not there anymore either. The bombs destroyed most of our buildings and then everybody left.”

“This one is the jungle camp in France.” Miro points now to a sketch of a toddler sitting next to a camp fire, “That was a bad place. No toilets, people cooking on sticks, gangs with knives and guns coming around every night. We never slept well there. And that’s my mother,” Niro’s eyes are suddenly forlorn, “Our boat was sinking in the channel. Both my parents went into the water, but only my father came back out.”

“I’m so sorry to hear that Miro. So it’s just you and your father here now?”

“It is, but we’re in a house with two other Syrian families. It’s good for my father as he doesn’t speak English very well. I taught myself and am doing well at reading too.”

“It sounds like you’re doing great, in spite of the circumstances. These are really good Miro. You should keep drawing.”

“I’ll tell you what, come back tomorrow and I’ll see if I can find some for you.”

“No problem. You run along now, I need to paint before I lose the morning light.”

It’s the following morning and George waits for Miro, his inner child jigging with excitement. He hears Miro arrive and listens for the gasp as he takes in the second easel set up next to George’s, complete with canvas, paints and brushes.

They spend the next two hours observing and mark-making. They take joy in their shared observation of the natural world, a squat frog on a lily pad, a grey squirrel scrambling up a tree and fat fish swimming just below the surface.

When it is time to leave, Miro turns to George, “This has been the best day ever, thank you so much.”

“It was my pleasure Miro. Do you have somewhere to store this stuff at home?”

“Thank you,” Miro scrubs furiously at his face with paint covered hands as tears erupt unexpectedly from his eyes, “I’m sorry. Nobody has ever done anything like this for me before.”

George kneels down and offers a cloth to Miro so he can dry his face. “Miro, it’s my absolute pleasure, just promise me you’ll keep drawing?”

Miro smiles shakily through his tears and nods.

Over time, the warm, heavy air is gradually replaced with a sharp chill. Flowers of yellow and red, now shrivel to orange and brown. The leaves begin to drop. There is a low, grey mist covering the pond on one frosty November morning as George works alone. He waits for his companion who now joins him regularly in the park to create ever more beautiful work.

The stillness of the dawn is pierced by the raised voices of young men coming from a short distance away.

“Where did you get that from you thief?”

George’s hackles rise as he searches the semi-dark distance for confirmation of his fears. He walks towards the noise and sees three dark shapes circulating menacingly around a fourth.

“I didn’t steal this and I haven’t stolen anyone’s job. We’re not even allowed to work!” Miro’s voice emanates from the darkness suddenly.

“Even worse! You just scrounge from us taxpayers instead. Why don’t you go back to where you came from?”

The shape gives Miro a shove and he hits the ground, a crack coming from the canvas in his arms. The others begin to kick and prod Miro as he hunches into a ball.

The dark figures glance towards him and then turn and run in the other direction.

“Are you ok?” George reaches Miro breathless and helps him to sit.

“Does that happen often?”

“Sometimes. People don’t like us here. They think we’re just after money.”

“You shouldn’t have to deal with that.” George dabs a tissue at a cut on Miro’s lip as he winces.

“I know, but people are angry at us.”

“Ah they just don’t understand. They’re no more entitled to your house than you are. They’ve just been fed stories blaming people like you for their problems and deflecting blame from the real sources. It’s all smoke and mirrors.”

“Smoke and mirrors? That’s a new one!” Miro manages a smile.

“Yes. It’s no more real than a magician’s trick! It’s all an illusion, but there are plenty of us here who see through it. Who understand.”

“I will show them. I will work hard at school and one day I’ll become a doctor here. I’ll pay my taxes and give back to my community. One day maybe I’ll even save their lives, or their children’s lives.”

“Maybe you will my friend.” George helps Miro to his feet and dusts him off. “Let’s get you home to your father to rest.”

The chill turns to biting cold. The orange and reds of autumn have given way to the brown bones of winter and this particular morning, everything as far as the eye can see wears a coat of white.

George reaches the pond and notices with surprise that Milo is already there. He is sitting on a bench, face in hands, staring out over the icy pond. He cuts a figure so cold and still he could be an ice sculpture.

There’s no need to ask, George can see something is wrong. He stands and waits for Miro to speak.

“We’re being sent back,” He says, not taking his eyes off the frozen pond.

“There was a report. They say the situation in southern Damascus is markedly improved and they’ve reclassified it as a safe zone.” Miro makes quotation marks with his fingers in the air. “We have no home there to go back to and my father will be persecuted by the regime’s security services. We’re being sent back there to die.”

“This is awful! We have to fight it.” George sits down next to Miro. Even as he says it, he knows the fight is lost.

“It’s hopeless. My father said so too.” Miro looks despondent.

They stare at the pond, opaque and frozen like Miro’s hopes and dreams. They sit in silence for a long time, waiting for the winter dawn, which when it comes is so dark and drab, they’re not sure it’s arrived at all.

Eventually George turns to Miro and says, “We should paint while we still can.”

It is the end of winter, nearing spring. George hasn’t seen Miro for nearly a week and he worries he has left without saying goodbye. He reaches the pond that morning, still frozen but punctuated here and there by thawing ice, holes carelessly created by children throwing stones.

George reaches the bench and sees a package wrapped in brown paper addressed to him. He opens it to find Miro’s sketch book, along with a handwritten message.

THANK YOU FOR SHOWING ME KINDNESS GEORGE. I WILL CARRY THE LESSONS YOU HAVE TAUGHT ME THROUGH THE REST OF MY LIFE. I LEAVE YOU THIS BOOK TO REMEMBER ME BY IN THE HOPE THAT ONE DAY WE MEET AGAIN AND YOU CAN RETURN IT TO ME. YOUR STUDENT AND FRIEND, MIRO.

George stands in the bustling art gallery, surrounded by everyone who is anyone in the art world. The press stand out with note pads or heavy cameras rather than champagne in their hands and he nods at them encouragingly. It is important he impresses them tonight so that the story he has to tell reaches far and wide.

The time has come and, after a short introduction he pulls a cord and the red curtain falls to the floor. There is applause followed by the hum of chatter around the room, which silences as he takes to the microphone.

He begins, “One day, whilst painting down by the pond, I met a young boy called Miro…”

More stories from Elissa Dawson and writers in Humans and other communities.