The Spectacle of an Almost Kind of Love

by Akina Marie 12 months ago in humanity
Report Story

Finding love in a city that always changes 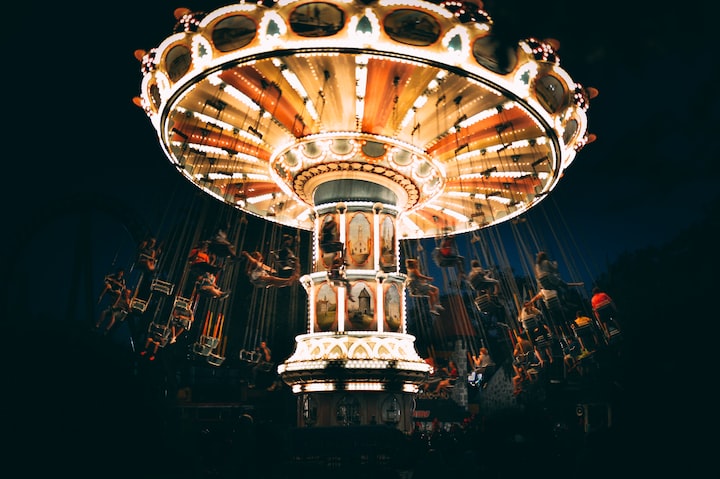 Photo by Yasmine Arfaoui on Unsplash

Like most stories of magic and adventure, it begins with a moment of chance set in a whimsical circus.

Our decision to meet was out of the blue and spontaneously unplanned. Adam stood outside my door with a plastic bag filled with treats for the sick — a box of Tylenol, orange juice, and several EmergenC packets. I was coming down with a cold and gratefully accepted the kind care package that he hand-delivered to my doorstep. Although we both attended school in the city, we seldom crossed paths with one another. He went to school by the lake, while I went to school up on the hill. Although San Francisco existed in a 7 by 7 peninsula, there was so much I have yet to discover during my daily outings of this intriguing city forever embedded in my mind as a magical circus.

In San Francisco, each district has its distinct hue of color and rhythm, all of which were charming in their own way. There were the dancers down on Market Street interweaving on and off Muni buses in choreographed numbers; some of them suited Joes, while the others, free-spirited Janes. The Mission is where the acrobats — modern-day artists — lived and painted the circus wild, while Karl the Fog would pay unexpected visits and mask a bright day with an overcast of fog in his series of illusions. The circus, which I have come to call home changes almost instantaneously just within this 7 mile by 7 mile radius. The secret was that the magic lingers in the synchronicities of each district, and without it, the circus itself would not thrive.

There was still much to see, but only having access to the Muni I have become accustomed to the usual sightings that still fascinated me — the five-tiered concrete pagoda that peeked its head in Japantown, the grandeur Saint Ignatius Church on the corner of the University of San Francisco campus, and the rows of vinyl record stores accompanied by the musky scent of weed on Haight and Ashbury.

I took the plastic bag from Adam’s hands.

I nodded my head while hugging my jacket closer to me. Karl was in the middle of another illusion and despite the coldness that hugged me and the throbbing headache, I agreed to his offer.

After spending half the day messaging one another and posing the question as to why we never ventured alone outside of our intersecting social circles, Adam and I decided to meet for dinner.

“Perfect. I’ll take you to this Korean restaurant,” he said while opening the door to his car. Adam had a charming smile — boyish, but still charming in its own way. “ It’s a hole in a wall but delicious.”

We made our way down Geary and headed toward Sunset. At first, the restaurant looked like a regular apartment with Christmas lights hanging dimly in October. It was a Korean spot that Adam frequented with his buddies. He kindly opened the door as I was met with the warm scent of peppery goodness, fermented cabbage, and grilled meat on the stovetop. The interior was cozy with wooden tables, the same Christmas lights, and bamboo curtains pulled down for privacy.

There was just so much of this circus I had yet to discover.

Throughout our meal, we swapped our favorite food spots, engaged a debate of where the best dessert places in the city were. He said Tart to Tart. I begged to differ. Our conversations flowed from food spots to our ex-flames, both of us peeling the layers of small talk one by one. From the outside looking in we looked like two strangers turned almost friends, hovering over hot kimchi stew and fried rice. Truthfully, we were grievers finding safety in this new found relationship.

With our bellies full and my sinuses cleared, he suggested we continue the night with a visit to the “famous” Tart to Tart for their decadent chocolate cake and hot chocolates to pair. I obliged, curious to see what other gems lived in this circus.

As we waited for the streetlight to turn, Adam pulled out his Spotify.

“Have you heard of Iron and Wine?” he asked.

“Never heard of them,” I responded.

He scrolled through his playlist with his thumb before stopping on a single track. “This is one of my favorite songs.”

The soft melodic strumming of the“Trapeze Swinger” began to play. It revealed me in a way that would come crashing in and slowly recede. We continued to talk about life and the layers of love we’ve lost. In due time, we found comfort in each other’s company to talk about the mistakes we weren’t quite ready to let go of just yet. From the outside looking in, we looked like old friends who might have known each other for some time. Truthfully, we were two people looking for forgiveness in the moments that continue to haunt us.

Holding our hot chocolates and diving into our single slice of chocolate cake, we continued our adventure to Twin Peaks also best known for its breathtaking view of the city. I asked to play the song again, so he did.

By midnight and I have come to learn about the unraveling of Adam’s recent relationship. How he would pour his unsettled emotions into songs that were sitting in his computer — unreleased and unfinished, the same way I had pages and segments of novels that were sitting in mid-sentences and unpublished.

I talked about my past relationships, one that he knew of and another from a not so distant part of my life. The lights from Twin Peaks looked different this time around and I wasn’t sure then if it was because Karl decided to keep at bay or if it was because of my newfound company. My hands were frozen and my lips were chapped. I felt Adam’s hand reach for mine in my jacket pocket where he held it long enough for me to stop shivering. From the outside looking in, we looked like lovers, but beyond the illusions, we were just two people trying our best to keep balance on this thin tightrope.

I often think back to that night and how Adam and I — two strangers turned almost lovers — chased the flickering lights that guided us through this vast circus we called home. Like the trapeze swingers, we allowed ourselves to roam high above the hills and held our breaths at the steepness of the fall. Little did I know it then, but trapeze swingers take part in an act that cannot be done solely alone and how Adam and I, too, were navigating similar waves of grief in an act of our own.

That was the first time I let myself get lost in a city I thought I knew so well; the hole in the wall Korean restaurant, the cozy cafe that was home to the most decadent chocolate cake, and the beautiful view that all carved out a new meaning in what I have come to understand was a unique almost kind of love and what it meant to be a spectacle of it.

More stories from Akina Marie and writers in Humans and other communities.