by Rebecca Hansen about a year ago in love
Report Story

Death, life and love on land and sea 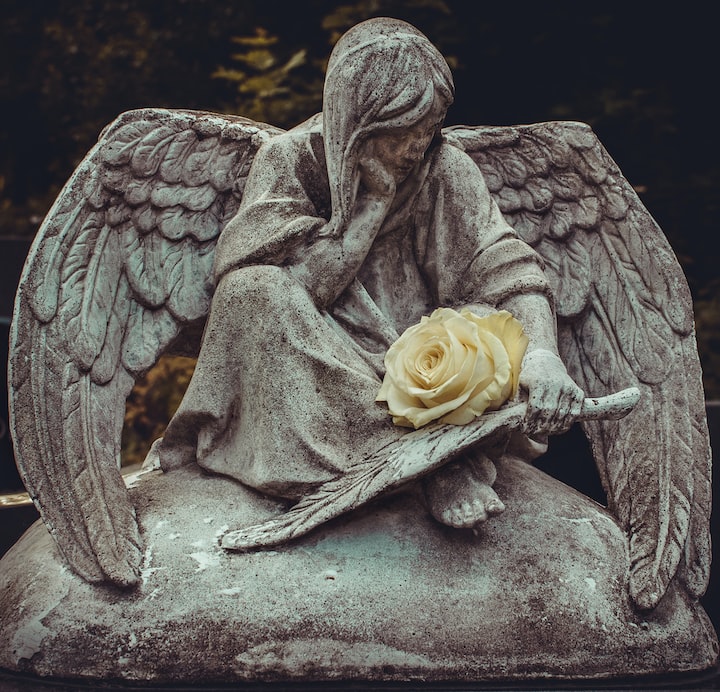 “Paul was the best detective I’ve ever known,” I croaked.

Must be something stuck in my pipes. I cleared my throat and continued.

“The best detective, and the best friend. I don’t - “ there was no use denying it, I was going to cry “ - don’t have any idea what I’m going to do without him.”

My voice broke, turning the last words into a grotesque sob, and I stumbled back from the edge of the grave. My fellow mourners blurred and swam as I made my way to the back of the crowd, wanting some space and fresh air.

Every word I’d said was true. Paul was my best friend and hands down the best detective in at least the surrounding sixteen states - all places that had called him in on their hardest cases.

I’d also been hopelessly in love with Paul. Hopelessly, because I wasn’t his type. Turned out Paul was straight.

But still. We had made a great team. He brought the great, and I brought the team. And now? Now I might as well just give up my badge because I knew, sure as the seasons turn, I was nothing without him.

I looked up from the bench I’d sunk onto, sobbing. The woman was just taller standing than I, slouched as I was on what I suddenly felt very sure must be her husband’s grave. I leapt to my feet, wiping my eyes hastily and blinking.

Another sob swelled into a hiccup. I had to get hold of myself.

But she was waving her wrinkled, bejeweled hand dismissively.

“No, no, young man, it is not for you to be sorry! I am the one who interrupts such sadness with the trivial, by comparison, and yet still there is very little time. I know you worked closely with Detective Tergeist, and I hope you can help me! It is, as I said, a trivial matter, taken next to this tragedy, and yet I must do all I can. It is not for myself but for Jinny, you know. I can’t take it back and - well, I just know he didn’t do it, that’s all. And I hope you can find who did.”

I kept blinking, as if clearing my vision would clear my mind, or somehow make clear the meaning of the sounds that were pouring from her mouth - a rather large mouth, I thought incongruously, for such a small person. It was the sort of thing Paul would have whispered, and I caught a sob and a laugh colliding in my throat.

The woman came into focus. She was younger than I had previously assumed, and her accent was one I couldn’t place. Four-foot nine, I would estimate, and not 100 pounds soaking wet. Her face was animated, large mouth offset by huge, expressive eyes and the tiniest of button noses. She wore a hat, but the ringlet on her forehead suggested dark, curly hair. I was sure I had never met her before; even I wouldn’t have forgotten a face like that.

“Are you alright?” she asked, concern drawing a single line across her brow.

“Ahem,” I said again, glad to have found my voice.

Now, what happened next I might never be able to explain. I opened my mouth, and what I intended to say was, “I am so sorry, ma’am, but I am no longer working cases. Have you brought this matter to the police?”

Instead, I heard myself speaking rather different words.

“Of course,” my voice murmured. “Perhaps we should go speak somewhere more...private?”

Three hours and seven cups of coffee later, we were sitting on the sofa in my living room, the whole absurd story laid out before us - quite literally, as Vivien (an apt name for such a sharp person, Paul would have said) had produced a large folio of documents, newspaper clippings, photos and even corner store receipts to back up her claims.

Vivien, it seemed, had a daughter named Janine, Jinny for short. Jinny had gone off to college and gotten herself engaged to some man of whom Vivien did not approve.

“Not that I said anything,” she insisted, “not more than once. I just thought Jinny could do better.”

I averred that parents often felt so about their children.

“You would have had to meet Jinny,” she sighed, as if that explained something, and went on with her tale.

The couple had been married just after graduation. Vivien had been in attendance, and they had seemed blissfully happy.

“I still didn’t like the man,” she said, “but Jinny was happy, so what did it matter?” Only a trace of bitterness laced her words.

But while the newlyweds were enjoying their honeymoon on North Carolina’s Outer Banks, tragedy had struck.

Tragedy, or more specifically, a large, blunt object. A large blunt object had struck Jinny in the head, and she had drowned in the shallow waters of the Roanoke Sound.

Her husband was arrested, and all evidence pointed to a domestic dispute gone wrong. The man, of course, insisted he hadn’t killed his wife; insisted that he had been madly in love with her, and had been seven miles up the coast at the time of her death.

But there was no one to confirm his story, and the trial, which was set to start next week, seemed a forgone conclusion.

“But you don’t think he did it,” I mused, looking over the papers and clippings strewn across my coffee table.

“And he’s not a murderer.” I finished her sentence.

She nodded, wiping her eyes.

“And Jinny loved him.” Her voice was low. “She doesn’t deserve to have him go down for this.”

The crux of the evidence Vivien had laid out was this: at the estimated time of Jinny’s death, the husband claimed to have been purchasing her a gift at a small shop several miles up the narrow strip of land that stood between the North Carolina mainland and the Atlantic Ocean. He had, according to his story, left Jinny behind to nap.

No witnesses could be found to corroborate his story. No one at the gift shop had recognized him later.

It was true that he had taken a selfie at said gift shop, with a timestamp that would have meant a lightning-fast speed on his drive back to where Jinny met her death in order to have dealt the fatal blow.

But, as the prosecutor was happy to point out, timestamps, and indeed, digital photos in general, could be faked, changed or fabricated altogether.

And there was no proof that he hadn’t driven 110 miles per hour down the highway to kill his wife.

“I should have Paul take a look at this,” I muttered.

Then I remembered that Paul would never take a look at anything again. It was like a cold slap in the face.

A cold slap in the everything, in fact. I shivered suddenly, in spite of the warmth, in spite of my seven cups of coffee.

Then I looked back down at the coffee table, mostly to avoid the question I knew was in Vivien’s eyes.

In the selfie the husband had taken, windswept, standing by a yellow convertible in a parking lot, grassy dunes running down behind him into a serene, cerulean sea.

There, on the horizon, hardly more than a speck in the tiny photo Vivien had printed off her son-in-law’s social media, was a ship.

Vivien looked at me as if I had gone mad.

“Ship?” she asked in confusion.

Vivien squinted, then pulled a pair of glasses out of her purse.

She wiped the glasses on her shirt, settled them onto her nose, and squinted again.

“I hadn’t noticed the ship,” she breathed.

It had never happened to me before, and it never happened again. But that day, in my living room, I saw the world as Paul must have seen it - an intricate map of infinite details, all somehow coalescing into a web of interconnection that made everything make sense.

The ship was The Faltering Peregrine IV, and she was, indeed, at that precise latitude and longitude at the time the photo was purported to have been taken.

And, as it turned out after a bit of digging, there had been roadwork on that stretch of highway that day - not enough to be noted by the unfortunate husband, but enough that a speed demon going down the road at over 100 miles per hour would have been noted by the construction workers.

The case was not a complete success, of course; I couldn’t find out who had murdered Janine. But Vivien was content knowing that her disliked son-in-law was in the clear.

I didn’t go to the trial, but I read the papers the next morning. The husband had been acquitted. A photo showed him embracing a short, curly-headed woman.

Setting down the half-read paper, I picked up my phone and dialed my police captain’s number.

“Barnes,” he answered, a note of relief in his voice. “Good to hear from you.”

I heard his heavy cheeks droop as the smile left his face.

The silence was deafening.

“I’m going back to school,” I offered, as a sort of explanation, although it had not occurred to me to do so until that very moment.

The silence stretched on so long that I pulled the phone away from my face to see if we were still connected.

And with a beep, my life as a police detective was over.

It was time that I, Thadeous Bartholomew Barnes III, stopped living Paul’s dream and started pursuing my own.

I glanced back down at the paper, noticing the small thumbnail of the selfie that had cleared a man’s name.

I jumped, then shook myself. Of course I had not just heard Paul’s voice. That was in my head. It was always in my head.

Nevertheless, I picked up my phone once again and called the contact who had been entered last Tuesday as “The Faltering Peregrine IV, Captain/Info.”

“Hello,” I replied, my voice suddenly cracking like a teenager. “This is Barnes - Thad, that is. You said I should - “

“We put in at Wilmington tomorrow,” the deep voice reverberated through my head and down into my chest. “Can you be there by then?”

Oh, I would be there, all right.

Paul had never steered me wrong in life. I couldn’t help but feel that The Faltering Peregrine IV was his way of steering me into a life without him.

Even if it was all in my head, I thought. It was time for a new adventure.

“Yes,” I said, confidence creeping into my tone, “Yes George. I will be there.”

I was going back to school. But first, I was taking a very handsome ship’s captain up on his offer of a private trip up the eastern seaboard.

More stories from Rebecca Hansen and writers in Humans and other communities.