by R Murphy 2 months ago in friendship

When a mysterious stranger suddenly appears, and reveals hidden secrets from the past, nothing will ever be the same again. 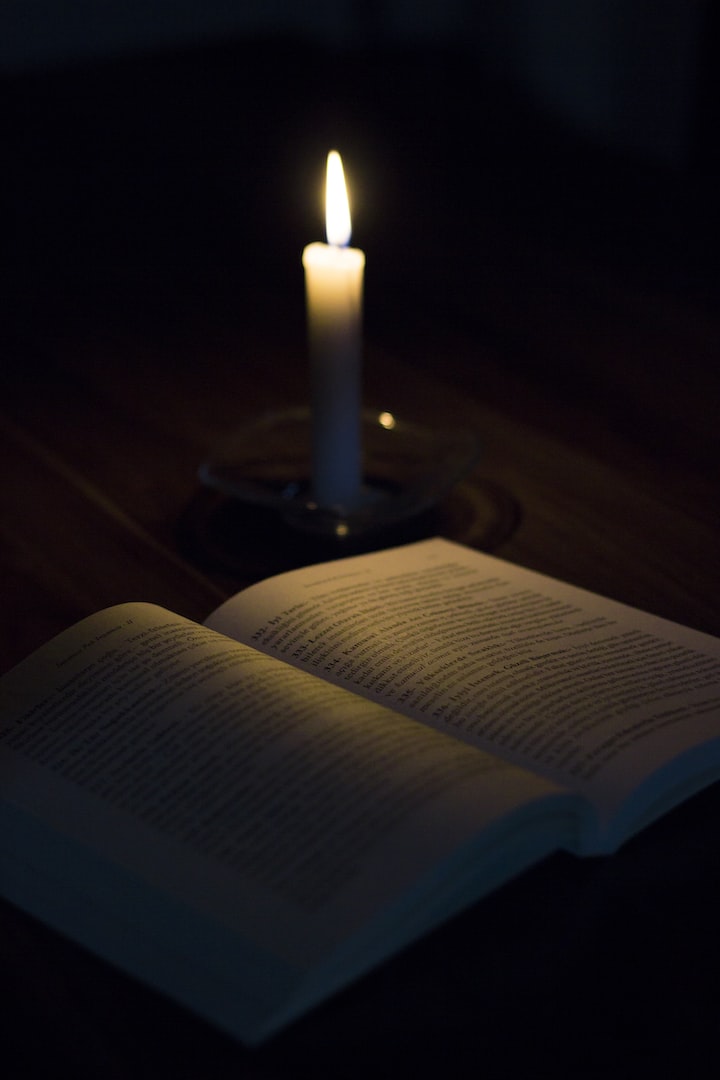 Photo by Huzeyfe Turan on Unsplash

The scorching midday sun was directly above her in the cloudless blue sky, unrelenting and unyielding as it baked the already desiccated soil. Terra Nixon sighed, arching back to relieve the persistent dull ache in the base of her spine, until she felt a small series of satisfying muffed pops. Her callused fingers reflexively gripped her scythe, its obvious age belying its burnished, but deceptively sharp blade. She glanced up and down the rows of wheat, skimming over the familiar sight of her fellow workers and neighbours bent double over the crops, heads bowed, as strong, swift hands collected and gathered their bounty without pause.

Terra exhaled again, puffing a drawn-out warm breath of air through her dry and gritty lips, reached up to tuck a loose strand of damp auburn hair behind her ear. Forehead prickling, she adjusted her wide brimmed straw hat, the cotton headband within already soaked with sweat. The long summer harvest days were punishing but necessary, Terra reminded herself, even as her keen hazel eyes scanned the field, searching for a glint of something to break the mundanity.

She had always been observant, ‘eagle eyed’ Aunt Bess called her, which was better than the names the other children at the village school had come up with. Her unusually fair skin, fiery red hair and inquisitive nature had marked her as ‘other’ and only her friend Joe had been seemingly unbothered by it. Even now at seventeen, she struggled to maintain the steadfast focus on the job at hand, like the others seemed to. She was always distracted, finding shiny stones, colourful feathers, and the occasional coin in the dirt, which she would stash in her pocket before anyone else could see.

A memory rose, when she had been young and playing in the woods behind the house she lived in with her aunt and uncle. She had been pretending to be a magpie, her favourite game, and had been scratching around in the dirt and kicking up fallen leaves. She had spotted a hollow in one of the old rotting tree trunks and had the strangest urge to stick her hand in, only to pull out a large glittering milky-white stone. It had shone like a rainbow in the sunlight, and seemed to pulse with vitality. It had delighted her, this secret treasure, until Uncle John had seen her playing with it. His face grim, he had taken the gem from her and made her promise never to think or speak of it again.

“Has the heat finally fuddled your brains Nix?” a loud voice boomed from directly behind her, followed by a short barking laugh. Terra yelped, the familiar daydream shattering as she spun on her heel to glance up into the smirking, dust-streaked face of Joe Tiller. He towered over her these days, tall and well built, the hours of toiling in the fields darkening his already tanned skin and broadening his shoulders. Obvious amusement twinkled in his dark brown eyes as she scowled at him. “Don’t think I wouldn’t still kick you in the shins,” she huffed, feigning indignation “I can still run faster too.” She poked him in the chest as he started laughing again. “Oh yes you’re a terrifying brute, little Nix” he chuckled “Come on it’s time to break for lunch and I’m starving, so you’d better hurry if you want any food.” Joe winked at her and started jogging over to the makeshift tables under the giant oak trees in the corner of the paddock. This was no idle threat; she had seen Joe eat more in one sitting then she would consume in an entire day, sometimes more, so Terra quickly took off after him, all thoughts of hidden treasures once again forgotten.

After jostling and playfully swatting at each other under the disapproving stare of Old Mother Harris, who ruled the food table with an iron fist, they grabbed bread, hunks of cheese and thick slices of ham before sinking into the cool, soft grass beneath the ancient canopy. Terra took a long swig from her water skin, enjoying the refreshing swish of liquid as it soothed her parched throat.

She heard murmuring, and then the unmistakeable sound of a horse and carriage trundling up the laneway. This was unusual. She had only seen one on the odd occasion that the Lord and Lady of the nearby Manor came to see their village fete or check the takings of the harvest. It was too early for that, and yet here it was, kicking up a dust cloud in its wake as it came to stop outside the field gate. The carriage door opened, and a man Terra had never seen before stepped out, smartly dressed in a dark grey woollen suit, polished shoes and horn-rimmed glasses. He was about the same age as Uncle John she guessed, albeit much less weathered looking, as he strode over to Old Mother Harris. Terra stared, water skin still halfway to her lips, as she watched them exchange a few cursory words, before the old woman raised a wrinkled hand, a bemused look on her wizened face, and pointed straight at Terra.

The man now stood before her, looking down at her with an expectant look for a few moments, and then cleared his throat before gruffly asking “You are Miss Terra Nixon, correct?” Startled, Terra scrambled to her feet, trying to brush off crumbs and the semi-permanent layer of gritty ochre earth that clung to her clammy skin and clothes. “Yes sir,” she stammered, “Can I help you?” He nodded curtly, before gesturing to the carriage. “We have a long journey, and I have a great many things I need to tell you, I understand that this comes as quite a shock, but time is of the essence, so we really must be going.”

He took Terra by the arm, and started to guide her to the awaiting coach, before Joe shot to his feet, looking rapidly between the two. Terra could see protectiveness and confusion warring with the instinct to stay quiet and not question the obviously well-heeled gentleman. She mutely shook her head at him, still trying to process this extremely strange turn of events, wondering with an odd kind of detachment if she should be more frightened than she actually was.

Before she realised what was happening, she had been herded into the carriage and the driver had prompted the horses to walk on. Terra barely had time to stick her head out of the window and catch a glimpse of Joe leaning up against the gate, staring after her with a look of shock and some other emotion Terra couldn’t quite decipher, before the dust cloud churned up by the wheels and hooves obscured everything.

The rest of the journey passed in an awkward, silent blur, as the man, who had since identified himself as ‘Mr P Handoll’ had gently but firmly told her that he would explain everything once they had arrived at his offices in London and not before. Many hours later, as night fell, Terra found herself perched on a stuffed leather armchair, now even more painfully aware of her dirty clothes and hair, sitting across from a decidedly anxious looking Mr Handoll, as he cleared papers from a large antique desk, the candlelight flickering off the lacquered surface.

He took a large silver key from his pocket, opened the top drawer, and produced a small, black leather-bound book. “Where to begin?” He turned the notebook over in his hands, stroking the soft leather with his fingers as he spoke. “You were raised by John and Elizabeth Nixon in the village of Braybrook,” Terra nodded. “Tell me child, did they ever speak to you of where you came from before you ended up in their care?” After a long pause, she shook her head and he continued softly, “Your parents were members of the Seekers Guild, a secret society of gifted and intuitive individuals, but after a terrible incident shortly after you were born, guild members were hunted, imprisoned, banished or even sometimes killed by those in power.” He stopped and looked up at her, pity in his eyes. He sighed and loosened his collar, “Your mother sadly perished, and your father, fearing for your safety, had you secreted away to a small village with a trusted friend, John Nixon. Your father then managed to evade detection by changing his name and leaving town. By subtly using his inherent gifts he made a new life for himself, eventually creating a trading business and living very comfortably until he sadly passed away last week from a brief illness.”

Terra felt like she had stopped breathing, a cold fist of anguish closing heavily in her chest, waves of disbelief crashing over her. “He never remarried or had any other children, so that makes you his sole heir of the entire $20,000 fortune.” he finished, handing her the notebook. “You are now a very wealthy young woman Terra. This is his diary, he left instructions for you once the time came.” He rang a small golden bell, and stood as the door opened, and a short, stout, grey-haired woman with a kind face entered the room. “Mrs Jones, please show Miss Nixon to her room.” Mr Handoll gave her a sad smile, “You will feel better after a good night’s rest. The book will guide you.”

After being bathed and dressed in a soft white nightgown, Mrs Jones had put an arm around Terra’s shaking shoulders and gently tucked her into bed, before leaving the room. Terra finally found the courage to open the whisper-soft leather notebook, brushing the thick cream pages with her fingertips. A rush of air left her lungs as she looked down at the elegant cursive script:

If you are reading this then I am gone, and I am truly sorry for the sudden upheaval this has caused, the years we have missed out on. I only wanted to keep you safe, but now you must learn how to embrace your heritage as a Seeker, for there are not many of us left, and there are wrongs we must set right.

Worry not about John and Bess, they will be well taken care of for the rest of their days, as a sign of my deep gratitude for caring for you all these years. Mr Handoll is my dear friend and trusted proctor; he will ensure you learn our ways and will manage your financial affairs. I know this has come as a dreadful shock, but I promise that you were born for this. Embrace it.'

Terra closed the tome with shaking hands and took a deep breath. Somewhere deep inside, a long dormant part of her was awakening. Purpose. She felt an unexpected sense of calm settle over her, as she closed her eyes and let sleepy oblivion take over. Come what may, nothing was ever going to be the same again. She could feel it in her bones.