by Elias Evans 2 months ago in family

The Mysteries of Voodoo 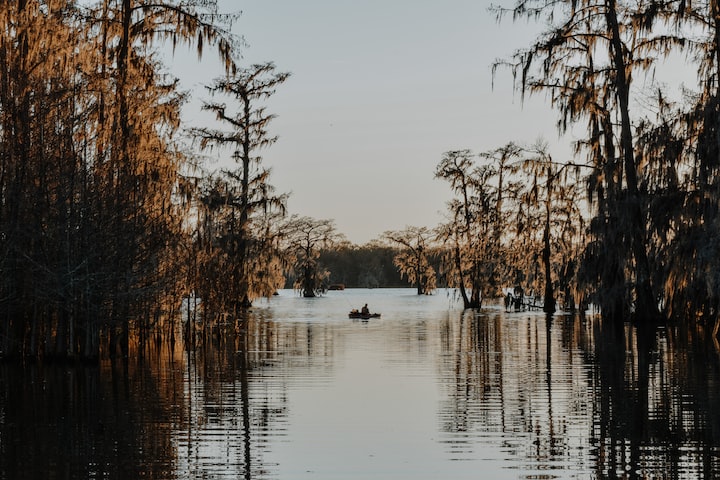 Photo by Nicole Herrero on Unsplash

Desirae was born and raised in a small town in Louisiana just west of New Orleans called Bayou Gauche. Now this town isn't known for anything in particular, in fact, most people don't even know it exists at all. Like most of the community, Desirae spent all of her free time fishing. There were lots of great places to fish in Bayou Gauche, it was mostly water after all, but Desirae's favorite place was beneath a weeping willow by the oil well where her grandma Soria taught her to fish. It was in this spot that when Desirae was nine years old, she spotted a Loa swimming beneath the water. It was a catfish as big as Desirae herself, with flowing whiskers that reached past its tail fin. It swam to the surface of the water, shimmering gold in the sunlight for a few seconds before disappearing again into the dark depths. Grandma Soria explained to Desirae that a Loa is a spirit that oversees human interaction with the natural world and that praying to these Loas brings fortune and good health. Ever since that day, Desirae would beg her grandma to take her to that same willow so she could cast her line into the murky water in the hopes of finding fortune. She would pray for shiny gems, gold coins, and sweet candy, and even after two years of no luck, Desirae was determined to catch the Loa. She would run to her grandma's house every day after school, and the two of them would fish by the willow until the sun went down.

Once she was out of middle school, Desirae grew up and had less time for fishing with her grandma. After starting high school, she spent most of her time studying for her classes and hanging out with her newfound friends. Her dream was to graduate and get a degree in marine biology at Louisiana State University. She worked very hard to achieve this dream, but she still hadn't forgotten her grandma Soria. She visited her grandma nearly every day, but there was one day that Desirae especially looked forward to. Once a year, on Desirae's birthday, her grandma would buy a pack of her favorite soda and they would go back to that willow to fish for the Loa. Desirae was old enough to know that they would never catch the Loa, if they even existed. She just enjoyed spending time with her grandma and listening to her fascinating stories. As time passed fishing became too difficult for Desirae's grandma and she could no longer spend hours sitting in a canoe under the sun. Desirae still visited her grandma and still loved listening to her stories, but she could tell that there was something wrong with grandma Soria. On Desirae's sixteenth birthday, grandma Soria told Desirae that she had been diagnosed with cancer.

At first, Desirae was furious. Grandma Soria had been living with cancer for almost a year before telling her. But almost immediately, her fury subsided. Desirae began bombarding her grandma with questions, most of which grandma Soria didn't know the answers to. She told Desirae that the cost of treatment was too expensive and that an old woman like her wasn't worth the money. Desirae embraced her grandma and broke into tears. She knew that there was no way for them to make the twenty thousand dollars required for the treatment in time. It felt like her grandma was already dead.

Desirae sat quietly with her grandma until she went to sleep, then solemnly left the house. As she walked home it felt as if the darkness was pressing in all around her making it hard to breathe. Suddenly, the path started spinning beneath her feet and she fell hard onto the dirt. She felt tears streaming down her cheeks, blurring the stars in the night sky. She stayed there, staring up into the sky until she could clearly make out the craters in the full moon. After finally wondering how ridiculous she looked laying on her back on a dirt path in the middle of the night, she mustered her strength to stand. After making it back to her house, she decided that there was no way she could go to sleep. She needed someplace peaceful to think, someplace familiar. So she grabbed her fishing rod and headed to the willow.

The night air was cold, but Desirae could barely feel it. Cast after cast Desirae threw into the water. She wasn't trying to catch anything, just trying to keep her mind busy. Cast after cast she threw for hours, slowly reeling in her bright green lure. Until she felt a tug. This surprised her, she'd almost forgotten she was fishing. But her instincts didn't fail her. She set her hook just like grandma Soria had taught her, just like she'd done a thousand times. She began reeling in, but this was unlike any fish she'd ever caught before. She tightened her grip and widened her stance. Her rod tip was bent down, inches from the water. But she wouldn't be beaten, not tonight. She dug her feet in and pulled, reeling with all of her might. She fought for ten minutes not letting up, and then she saw it. Shimmering silver in the moonlight was the Loa, its mouth clamped on the green lure at the end of her line. She couldn't believe it. She gritted her teeth and pulled as hard as she could pull. It shot out of the water putting Desirae off balance, and she fell to the ground. She stood up with an immense smile on her face, but her smile slowly disappeared. On the hook, there wasn't a Loa. There wasn't even a fish. Just a small black notebook. Desirae was sure she was losing her mind. She bent over to pick up the notebook when she noticed something strange. The notebook was completely dry. Suddenly, a wave of fatigue washed over Desirae. As she struggled to hold in a yawn, she realized that the sun would be coming up soon. Whatever was going on could wait until morning. So she grabbed the notebook and her fishing rod and hiked home.

Desirae awoke to the sound of her parent's beat-up car leaving. It was Saturday and they were off to volunteer at the food bank. Desirae would usually be going with them, but today she didn't want to. She sat up in bed trying to remember the previous night's events but eventually dismissed them as a dream. She slowly rolled out of bed and shuffled downstairs to get breakfast. She made her favorite breakfast: cheesy eggs and crispy bacon. When she was done cleaning her breakfast dishes, she went back up to her room and laid down. As she put her hands under her pillow to relax, she felt her fingers brush against something hard. She grabbed it and pulled it out. It was the black notebook. She stared at it, not knowing what it meant or what to do with it. Slowly, she opened the front cover. Nothing. The pages were blank. Nothing but page after page of plain white paper. She closed the notebook and stuffed it back under her pillow. But she couldn't take her mind off of that notebook. She snatched it back out from under her pillow and placed it open on her lap. She stared at the empty pages for a few minutes, then got up and walked to her desk. She grabbed her favorite pen and walked back to the bed. Then she started writing. The words streamed out of her, as if a dam had collapsed inside of her. She wrote about all of the times she'd spent with her grandma and how happy it made them both to be with eachother. She wrote about school and about her aspirations. She wrote about her grandma's diagnosis. Everything that entered her mind, happy or sad, found it's way onto the pages. She wrote for hours, until she was writing by the light of the moon. She filled the entire notebook that night and, strangely enough, it felt to her like it was the perfect size. As if the second she filled the last line of that notebook, a weight had been lifted and she could breathe again. She shut the notebook, closed her eyes, and effortlessly fell asleep.

Desirae awoke feeling rejuvinated. She lay on her side, staring out of her window at the colorful birds flitting around in the morning sunshine. She got up and went downstairs to make breakfast, but realized she wasn't hungry. She stepped outside, sat down on the porch stairs, and closed her eyes to feel the warmth from the sun on her face. She sat there for a few minutes before she decided she wanted to visit her grandma, so she ran upstairs to get changed. As she was changing, she remembered the black notebook. She reached under her pillow to grab the notebook; she wanted to show it to her grandma. But instead of a hard cover, all she felt was paper. She lifted the pillow from her bed and dropped it on the floor. In place of the notebook was two neatly placed stacks of brand new one hundred dollar bills. So immediately, Desirae picked them up and began to count them. She counted one hundred in one stack and one hundred in the other stack, equalling a grand total of twenty thousand dollars! Desirae couldn't believe it. She sat there stunned, wondering what to do with this money. And then she realized, it was for her grandma's treatment. She sat in disbelief, tears welling in her eyes. After a few moments she jumped up, threw on her shoes, and ran out the door to share with her grandma the miracles of Bayou Gauche.

Just a college student trying to spark a career in writing.

See all posts by Elias Evans →