by Kayla McKinney 8 months ago in humanity 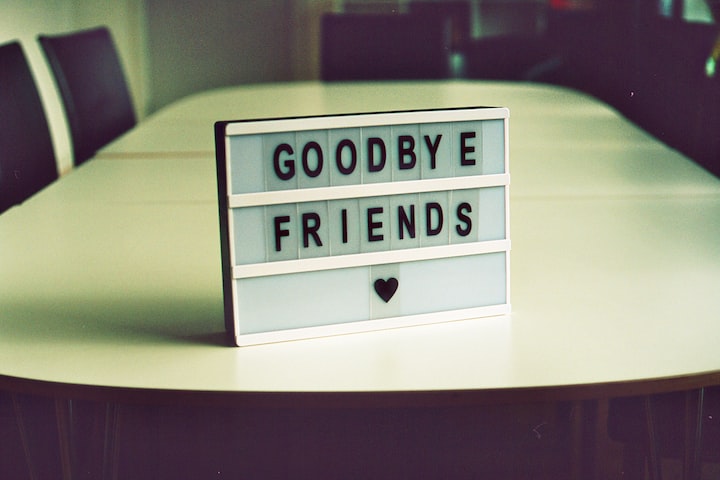 In the ten years he has performed on Desert Evac, Kade “Kady-Kat” Fareidha has never hated a prop before. The black book however - Doomsday Book, his character, Emariel Kasey, has taken to dubbing it - so small in those huge hands, Kady thinks he’s going to hate it for the rest of his life.

Least you get one, ‘Mariel quips from inside his head. A life.

They’re not killing you off, pretty baby, Kady goes to the effort to reassure him. Not you and not David. His co-star (if either of them can be said to be any such celestials in an ensemble show where neither of them ever got top billing) would have liked a dramatic death scene - red blood on gold sand - Kade is almost sure of it. Thankfully, the writers believe that their swan song has gore enough.

When ‘Mariel remains stubbornly silent, dreading The End of All Things, the scene with that book, Kady tries again. You know I’m not asking you to go. You’ve been keeping my refrigerator stocked and keeping me in nice clothes for a decade. You can stay with me as long as you want.

It’s something like inviting a ghost to build a house in his bones, but the truth is that Kady is used to the little nurse. He’s played lots of roles - comedy, bit parts, never the star, always there for slapdash and slapstick - but no character has cohabitated with him the way ‘Mariel does.

Since the man who plays David Aubrenne Venham is the closest thing Hollywood has to a modern day recluse, Kady doubts it, but he isn’t given to breaking hearts, especially not his (shared) own. Sure. Sure we will. We’ll take him out to celebrate when he lands his next big role - or when he goes on tour for his music. He is a fine pianist, character actor Arthur Stiert, possessed of hands that glow with living light and command the magic that resides at the heart of shaped dentine forced into symphonic servitude, a new sort of smile. Now, c’mon. Let’s get this over with.

The scene is a physically demanding one for little Emariel. The desert heat is real. Kady reminds himself to be grateful- not that his country went to the desert for its wars, but because his coloring was such that he got a call back. He was slated for a single season at first - there to remind viewers to sympathize with “the enemy” and the occupied (who look like him).

Don’t forget the queer-baiting, Emariel says, snide even after all this time. The show has danced around it of course (musn’t alienate those mainstream viewers!), but there’s plenty of fan conjecture about his character who may be trans or may be queer… but who (fans and writers don’t know ‘Mariel like he does) is definitely in love with that Atlantic aristocrat, Lieutenant David Aubrenne Venham. Given that his real life containment unit, Kady, is in love with Arthur Stiert, who plays said Lieutenant, it’s all terribly convenient.

Or it would be, if the clock wasn’t striking on a decade of feelings neither Kady nor ‘Mariel has ever tried to speak.

And right now, cameras rolling, he can only say what he’s been bidden.

“Good luck, sir. Back in Vermont.”

“I shan’t need it, pet, when I have skill.” David reaches out (per the script) and straightens Emariel’s cap. “If you ever require a reference, do look me up, yes?”

Emariel salutes, and, if his eyes glitter a bit, no one calls cut. The hot lights dry the salt to sweat on his skin. “What I require’s money, sir. Ta move. Ta start over. Go to school. Get a cat.” He forces himself to look hopeful in a way that will make female viewers go, “Aww.” “Always liked ‘em.”

There’s an episode where he wept over orphaned kittens. He thinks he’ll be weeping over this farewell for the rest of his life.

David nods at him. Then he turns away - off to New England with his impossible eyes… and Emariel’s heart. He makes it three steps.

“Of course. The last one.” He passes it over. He folds Emariel’s hand over it, forces him to hold on. “Do check the figures, won’t you? I would not want you to be held over doing paperwork.”

Only later, after the Wrap party, will Kady realize those words were not in the script.

In his hotel room - he hasn’t got it in him to drive home yet, wants to walk the set once more, wants to ache in a space that’s been more and less than home - he finds the prop, wonders if he just failed to let go because it was in those long-loved hands.

He opens it on a check that’s very real. Inside, David has written:

By my estimate, twenty-thousand dollars ought to get you to “New England,” where I wait ready to pay for housing and schooling both.

P.S. I will buy you an entire litter of kittens.

P.P.S In case it was unclear, Arthur asks that you bring Kady, too, for him. Cat offer stands.

P.P.P.S. Arthur lives in Oregon - do not go to Vermont. He’s pretty sure you know that, but he worries.

It is in that moment that Kady decides he doesn’t care if he never acts again; he’s stealing the small black book, and he’s headed to where Arthur is - not to retrieve the heart the other man stole, but to offer his own.

On the way he calls his newly beloved with laughter living just under his tongue. “You could have said something. On the show or off.”

“This was far more fun. I will- we will see you soon?”

Inside his head, ‘Mariel hums the Evac theme.

Receive stories by Kayla McKinney in your feed
Kayla McKinney
Read next: How I Got Out of a Toxic Relationship