The Elastic Band Between Exile and Home

by Tree Langdon about a year ago in humanity
Report Story

A Ritual of Remembrance 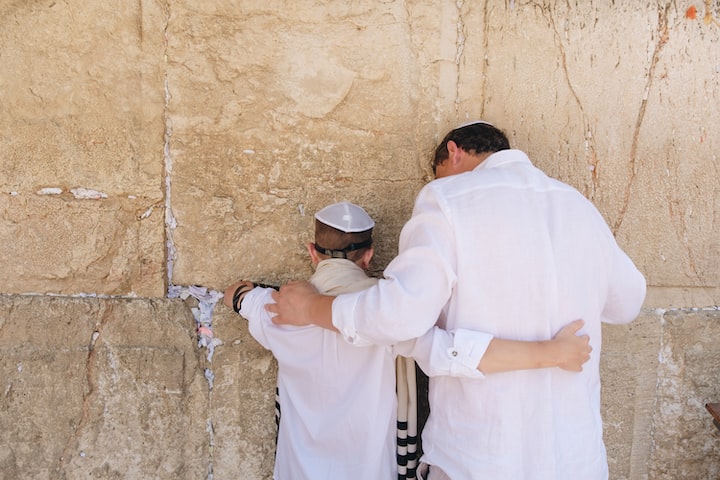 Photo by Anton Mislawsky on Unsplash

Most religions have a central theme or teachings that they are associated with.

'Love your neighbor as you love yourself', is a great example.

There are some deeper themes that can be discovered when you dive deeper into the history of the people.

In Judaism, a strong tension exists between exile and home. Over and over, they are forced to leave their homes, giving up everything for their religious beliefs.

I see this tension as being similar to holding a long elastic band with exile at one end and home at the other. You can pull the elastic so that the two ends are far apart, but they are still connected to each other. At any time the elastic may spring back together and in this way, everyone remains closely connected to home.

God's first instruction to Abraham was to leave his home and go forth, essentially moving into exile in order to serve God.

Early stories of Judaism are built on Abraham's willingness to sacrifice the safety of his homeland to travel into the unknown. Jews consider this act as a strong example of faith and they admire it.

It's a pattern that repeats.

Diaspora is the dispersion of Jews outside of their ancestral homeland.

When they were exiled from Jerusalem to Babylon in 600 BCE, at first it seemed like they had lost their home as well as their God. Initially, they felt that God belonged to the Temple and it had been destroyed.

Then they realized that God had followed them into exile. This change in perspective shifted them towards a more monotheistic view of God. Being able to worship anywhere allows you to be 'home' while you are in exile.

The need to return to their homeland or Holy land still tugged at their hearts but they could make a home in exile if they had their God. The elastic band is stretched, but the elastic is thick and strong, not thin and about to part.

Making a new home after being exiled.

After living for many years in exile, people tend to establish a home in the new country.

While this new home is not their ancestral homeland, the subsequent banishment from the new home creates another echo of the exile and home theme.

Jews were expelled from England several times, they were banished from France and their goods were confiscated. In the 1400s they were expelled from Spain and Portugal. During the Holocaust, they fled for their lives, trying to find countries that would accept them. They yearned for the Promised Land, but that land was more a dream than a possible reality.

At this dark time in the history of the Jewish people, the tension between exile and their home was so stretched that there was just a thin line of faith keeping the two concepts connected.

Passover is a major holiday where Jews remember and repeat the story of the Exodus from Egypt into exile for forty years in the desert.

An interesting thing about this story is that at one point they mourn the loss of Egypt as a homeland when they are struggling in the desert, even though they were slaves in Egypt. The Passover prayer ends with the saying "next year in Jerusalem," echoing the intense yearning to return to the Promised Land.

A Ritual of Remembering.

Jewish people remember and reenact their history through frequent rituals and storytelling, so each of these forced movements in and out of exile are deeply embedded in their collective memory. They recall the struggle of their ancestors and celebrate the times when they could return home as if they have experienced the events themselves.

Their very identities are linked to these memories and their ability to assimilate into a new country can sometimes be affected by this yearning to 'return home'.

The collective memories are strong strands of elastic that keep them joined to their home.

If you enjoyed this story, send me a tip so I can write another one, Or share it on social media. It would mean a lot to me.

Get an idea, a new word and a question.

More stories from Tree Langdon and writers in Humans and other communities.