Surfing in the Fog

by Kim Kuznitz 5 months ago in friendship

Short Documentary of surfing with friends 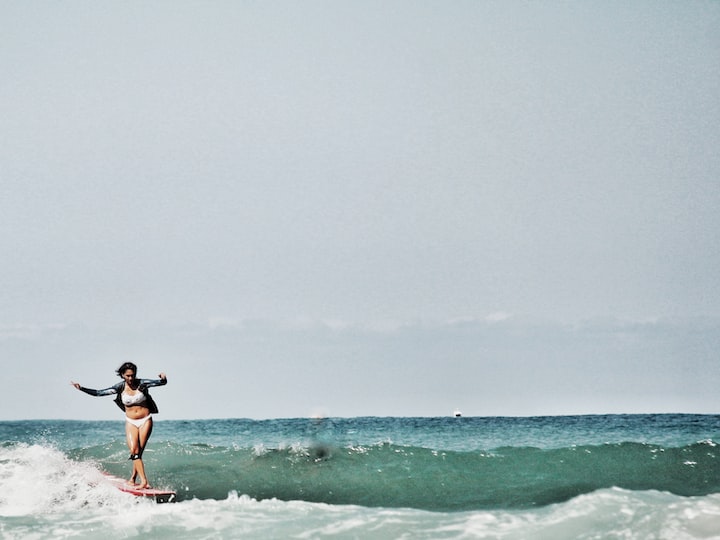 Photo by Emma Paillex on Unsplash

It was a swell day on an overcast dawn patrol morning in North County San Diego. My surf sisters Molly, Terri, and Kim M, checked out Turtles. Walls of water closing out, and we had longboards. Except Kim had a shorter board, but even the look on her face, she wasn’t sure about paddling out.

It was early enough that we would have time to go to another break.

Suddenly to my surprise, Terri suggested Boneyards. Still being new to San Diego breaks anything was better than the NY beach breaks! Back in NY, the waves were so fickle you had to surf all conditions, and most of the time, they were stormy, bumpy, and windy or small little peelers. Don’t get me wrong. I love tiny little peelers! The only time we had size in NY, was a fun hurricane season, but sometimes it went from ankle biters to double overhead in a day! But I am not in NY now. I am San Diego, and today even though it was overcast and "cold" by California standards, I was stoked; it was still "warm.”

We drove down the 101 to Swamis, the parking lot was full, and it was still 6am! So we parked on the 101. By the time we suited up, the fog had rolled in. We couldn't see the waves or the size. Kim decided to leave, so Molly, Terri, and I climbed down the stairs to the beach, and one of our surf club member's husbands passed us on the way down.

Terri cheerfully turns to Molly and me, "Well, if Rick is out there, I feel much better!"

Molly was quiet. She was just a beginner at the time but was improving reasonably quickly for her time spent in the water. I could tell Molly was a little hesitant. She was not throwing out her one-liners like she usually does at dawn patrols.

My heart was beating too, but I didn't let them know. Molly and Terri both would have turned around, but I wanted to at least paddle out and try, so I cheerfully called out. “We will see the waves once we are down there. “

We get to the beach and walk around a few rocks, climb over a few reefs with our longboards on our heads for balance, then finally get to the spot to paddle out, and we froze. There was nothing but fog. Rick paddled out and disappeared. Surfers appeared through the thick pea soup as silhouettes on waves that were already broken. We couldn’t tell how big they really were.

"It is not that big," I said to stir the moral up even my own.

“How do you know? You can’t even see the waves!” Terri shrieked in her proper British accent. She always makes her sharp comments sound so pretty.

"Well, here is the thing… "I started to reason.

Yes, tell us, Kim." Molly finally spoke up. She seemed a little calmer.

“We are suited up and standing right on the beach, we cannot turn around now.”

"Yes, we can! Terri said

"Wait, let's just paddle out, and if it is too big, we can always turn around and paddle back in. Let's just go." I pleaded. "I will keep a lookout for you both."

"OK, let's do this! "Terri had a sudden burst of surf stoke.

“OK!” I said as strapped my least on and started to walk in the surf

I hopped on my board and started paddling as hard as I can. I hate getting annihilated by bigger waves and pushed back to shore. I looked back occasionally to keep an eye out on Molly and Terri. I told them to follow me.

I could see the waves coming, but it wasn't stormy. They were spaced out enough, so if we did get annihilated, we had time to scramble back on our boards and paddle out as fast as we can. They weren’t that small, but they weren’t too big either….well to me. We all Turtled rolled under a few bigger waves, but not too bad from my perspective.

Boneyards wasn’t too crowded, but we couldn’t see over to the main peak at Swamis, but I bet it was packed. After all, it was a swell day. We saw a few more people we knew out there, so the nerves eased a bit.

We got out the back, and I hear Terri yell. "These are HUGE! "

I laughed, “They are not that bad.”

Molly started teasing me. "Yea, according to you!"

“You will be fine!" We sat a little off the main peak, and it was just us. We surfed this break before, so I looked to see if I can spot the palm trees on shore I always use for a marker, but couldn’t. The fog was still a little thick, so we had to use instinct until it lifted.

I looked out over the horizon and saw a bump coming. My heart pumped a little harder as I started to see the wave peak a little more, and I was in position! I lied on my board and paddled as hard as I could looking over my shoulder to make sure it wasn't going to crash on me. I paddled a little to my right to make sure I wouldn't be in the "going over the falls" position. I felt the tail of my board lift, and I took a breath in and popped up, breathing out as my feet landed on the board. I stayed in a low crouch so I wouldn't be thrown off and felt the breeze stroke my face as I sped down the face of the wave. A smile spread from ear to ear, and I probably yelled, "Wooo!” all the way down.

I bottom-turned and rode down the line with a speed that I wasn't used to, but LOVED! I think I lept off my board like a kook out of pure joy and surprise I caught that wave.

I paddled back out and saw Terri floating out to sea with Molly.

I waved to them to come in a bit so they can catch some waves. They both shook their heads, "No," so I paddled out to them.

“Did you get that wave?” Terri asked.

“Nah maybe head high, but I am only 5’2” so I guess that qualifies as shoulder high. “

Out of the corner of my eye, I saw Molly paddling for a wave.

"Go, Molly!" I yelled as Terri, and I paddled out the back a bit further, so we wouldn't be in the way.

Molly didn't even look back at the wave she was paddling for. We turned in time to see her head going down the line from the back of the wave. Terri and I cheered, and Molly paddled back with a stoked grin on her face.

"That was terrifying!" she said.

"But you caught that wave! That was awesome!"I said.

Terri and I watched as Rick caught a bomb at the peak and rode it effortlessly and gracefully down the line as if that wave was only waist-high. It wasn't, it was head high on him, and he is taller than I am for sure!

I measure waves according to the Kim scale: Head high would be overheard for me, Shoulder-high is head high, and so on.

I paddled in a little and positioned myself in front of the palm trees that I can now see onshore. I saw a small bump on the horizon, and the wave swelled up. I egg beatered my legs under my board to position it to catch the wave.

I didn't look back because I knew the wave was not small, and I didn't want to psych myself out, so I just committed to catching it.

I felt the tail of my board lift, and it was a steep one. I might have been too close to the lip, but I popped up low and held onto the rail. I felt the wind in my face again and glided down the watery mountain and bottomed turned down the line. That time I did yell, "Woohoo!"

I paddled back out, and Terri yelled,

"All I could see was your hand down the line! That must have been overhead."

"I have no idea. I didn't want to know! I would have chickened out, and that would not have been good. " I replied.

"Ya think!" she said and laughed.

She turned her board, positioned herself, and paddled like a madwoman. The wave picked her up, and Molly and I lost sight of her until we saw her glowing blonde head riding down the line. Molly and I cheered and clapped.

Terri paddled back out with the biggest grin on her face.

"That was awesome!" she exclaimed in her British accent.

The sun was rising, the line up was crowded, and the fog was definitely gone now, and it was time we headed in to go to work.

We tried to get a wave in, but time was ticking. We didn't know how long we were out there and couldn't be late for work.

Molly was in first to shore, and she started unstrapping her leash. I rode some whitewash in on my belly, and Terri was doing the reef dance down the beach.

As I wrapped my leash up, Terri gave Molly a high five then one to me.

"We did it! We paddled out!" She was stoked.

"That was terrifying! But I am glad we paddled out," Molly admitted.

"Yes!" Both Terri and Molly echoed.

I laughed, and we began the walk up the beach.

That is why I love surfing with friends.

My name is Kim Kuznitz and I am a surfer, fitness entrepreneur, and sommelier. My page is about surfing, fitness, my entrepreneurial journey, and any creative story I am inspired to write. Go to www.kimkpilates.com for free Pilates videos!

See all posts by Kim Kuznitz →