Sunsets Over the Vineyard

by John Dodge 6 months ago in dating

A short story about romance 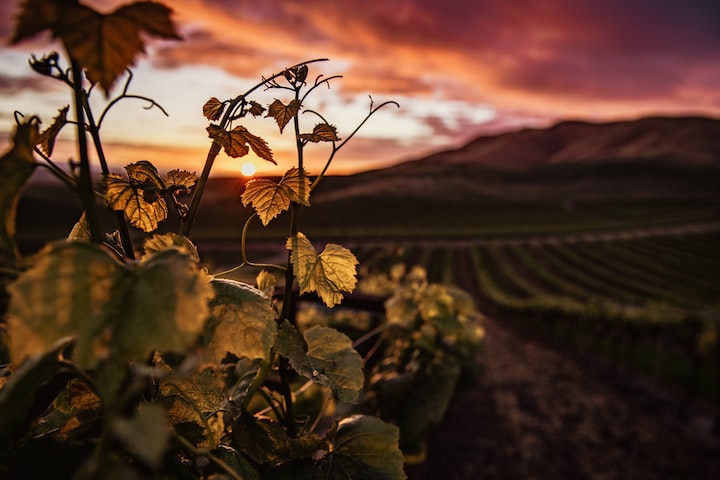 It didn't seem like much, the hole in the wall nestled between tire and tattoo shops in a beaten up strip mall with a beaten up parking lot. The really nice restaurants in the really nice part of town were only a few minutes more up the road, but Jack insisted that he had to meet her there. They had met at a party for some mutual friend that James took Jack to about a week ago. It didn't really matter whose party it was after Jack met her. They didn't talk long, but somehow James had set the two of them up on a date. Jack wasn't going in totally blind, so he had that going for him. He didn't know what they were going to talk about, but James assured him that they had a lot in common, and that if Jack was so certain about the restaurant then he could at least count on the wine to give him a hand.

James dropped Jack off at the restaurant a few minutes early, dutifully playing the unseen wingman now that Jack's car was stuck in the shop. It gave Jack plenty of time to make sure the wine was already at the table when she arrived, even if he did nearly knock over their waiter when he stood up to greet her. Jack was just a little flustered, is all. He had never met someone so charming, so radiant. Maybe once, but not like her. He apologized to the waiter before laughing things off and getting settled in.

However worried Jack had been about not being able to hold a conversation gave way soon enough to talking about the wine, just like James had said. The deep merlot filled that filled their glasses had been his favorite for years. Hers, too, as it turned out. She told him all about days gone by, nestled in the sand with a bottle beside her.

"Who needs a glass when there's no one around to judge you?" she asked him with a wink.

Jack hung on her every word. She grew up near the vineyard, and her family knew the owners. The older she got, the more time she spent wandering the rows looking for the most intricate knots on the vines that she could find. When she found the perfect one, she would spend hours drawing it over and over in her sketchbook, following its weaving tendrils and studying the way the shadows shifted as the sunset fell over the vineyard.

Jack had become so entranced by her stories that he almost didn't notice her topping off their glasses with the last of the bottle. He hardly even remembered the meal he had just finished, but he could have recited every last thing she just said if he had to. That's when Jack realized that he had hardly said a word during their entire meal. A mild panic set in. He didn't want her to think he was weird. Oh, God, he didn't want their first date to be their last. She was about to set down the wine bottle when it hit him.

"Y'know, I got to visit that vineyard once," he blurted out. The second the words left his lips the panic became worse. Did that sound stupid? Was he cutting her off?

"Oh? When was this?" she asked with a gentle, inquisitive tone.

"Oh, years and years ago. I had just finished college," he said. "I was driving to a new job a couple of towns away. Saw it on the drive and went back the next weekend with a couple of other kids. Someone worked there during the summers, and someone else's cousin grew up there, I think."

The fact that he was holding a conversation without visibly sweating was good enough for Jack to feel at least somewhat at ease now. Even better was that she seemed genuinely interested.

"I had this wine for the first time there. I don't know if it was something in the air, or just the way things were going for me then," he continued, "Something just spoke to me. It's been my favorite ever since."

"What was it like when you had it then?" she asked him.

Jack replied almost excitedly, "Like talking to a friend. Like success." He thought for a moment, gazing at the sketch of the vineyard on the bottle, becoming lost in the sun setting in charcoal above the twisting vines. "I don't think it's ever changed much."

Jack looked back to her, and she smiled at him as she reached her hand out across the table and laid it in his. For the next few minutes neither of them said a word. Desert arriving broke their gaze, and after that it was time to part ways for the evening. She had a cab come to get her, and when it arrived Jack opened the door for her, squeezing her hand and sneaking a quick kiss on her cheek as she slid into the back seat. She stopped, letting out a small chuckle before leaning up to give him a lingering kiss on the lips before sliding back into the cab and taking off into the night. Jack had lied when he told her he was going to enjoy the fresh air and walk back to his place, though now he was so smitten that he wished he hadn't. Thankfully, James was already there waiting in the parking lot to give him a ride home.

"Well," James said while Jack was getting into the car, "How did it go?"

Jack could only look at his friend and smile. "She was perfect."

It wasn't a long drive back from Jack's apartment to her house. James enjoyed the drive. Watching the city pass by from the highway always brought him a sense of calm that he appreciated on nights like tonight. It was a chance to just be without having to think too hard about anything other than the road and the lights in the distance.

"Hello," James called out as he walked in the front door.

"In the kitchen, James," her voice called back.

James turned down the hallway, finding her standing next to the oven with a glass of merlot in one hand and a stack of recipe cards in the other.

"I thought I'd bake some cookies tonight instead of just watching tv," she said. "How was the drive?"

"It was good, mom," James replied. "How was dad tonight?"

She put the recipe cards down on the counter and stared longingly into her glass. Her expression became frozen in a somber sort of smile before looking up at her son.

"He was good. Better than last week, not as good as the week before," she told him with the slightest tremble in her voice.

"Did he remember you this time?" James asked her.

"He remembered the wine."