by Beca Damico about a year ago in family
Report Story

A Personal Essay About Identity and "Fitting In" 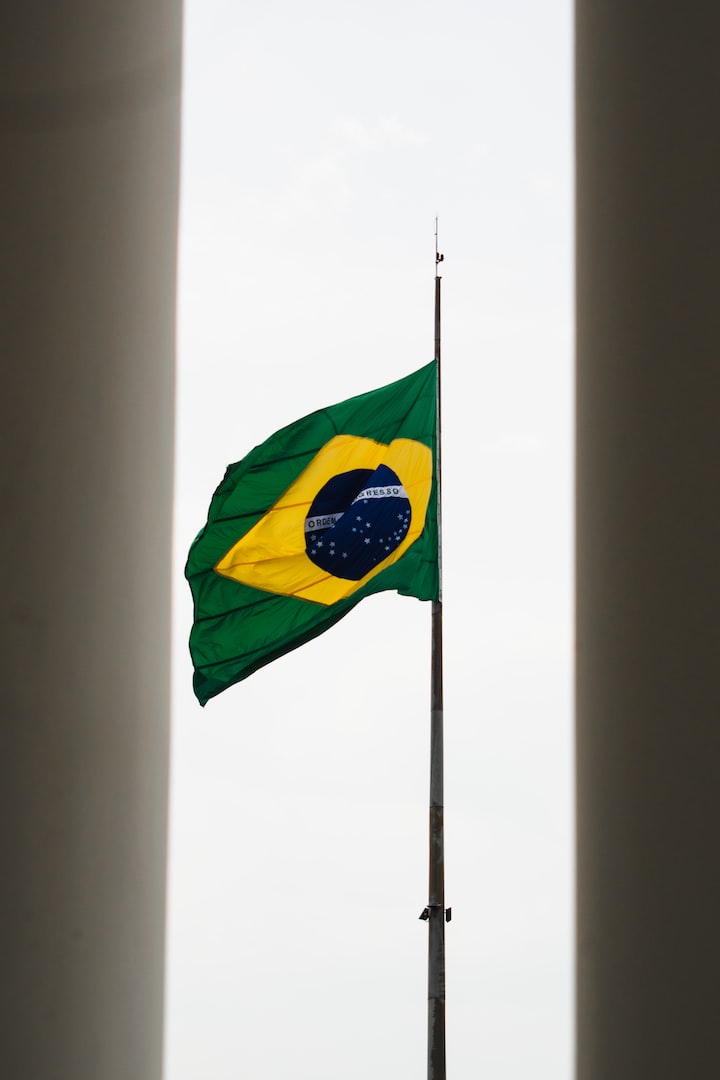 I hate the number 8. I moved to the United States and left my entire family, friends, and language in Brasil when I was 8. So, when 2020 came around and we “celebrated '' spending 8 years in the US, I was unhappy. Coincidentally, 8 years is also how long we lived in the States before getting our citizenship. That's where this story begins.

I was the first person in the room that day, probably conveying excitement and anticipation but the truth is, dread consumed every inch of my body, mind and soul. As the adults filled the room and began sitting down around me, all of us perfectly six feet apart from each other, tears filled my eyes. Here I was, dreading this moment, hating my hopeful, happy parents and hating myself for not being hopeful and happy, while these people who had worked so hard and put so much on the line to be in the same position I was. How ungrateful and snobby can I be? What is wrong with me? So many people, hell, my own friends, would’ve killed to be in my position, and all I could think about was how much I wanted to disappear, because the worst was yet to come.

This situation happened in August of 2021, a few days before I moved to New York City for college. And, the aforementioned “room” was the ceremony room in the Salt Lake City Immigration Office. I hated its white walls and bluish gray carpet, with the stage, podium and flag. A little over a year before that day I had been in that same room, only that time it was crowded with friends and family of the hopeful new citizens. I was there to watch my parents get sworn into this country. The United States of America. What a dream. Well, not for me. For me, standing in that room meant complete and utter loss of identity and self. I couldn’t bring myself to rationalize why my parents would willingly (and rather excitedly) stand up, put their right hand on their chest, and recite those loaded words. Those words that made you renounce allegiance (and in my mind, love and belonging) to any other country. Why did my parents want to become American? Was being Brazilian not enough for them? What was I supposed to be? When the ceremony ended, I was hit with the overwhelming sense that I didn’t belong to them anymore; in retrospect I know that thought was crazy and didn't know what I was thinking. Regardless, it felt to me that they welcomed this new country, and even cried happy tears, while all I had wanted to do for the past 9 years was go home.

It seems ironic to me that this process of becoming a citizen is called the “naturalization” process, because in my opinion there is nothing “natural” about renouncing your home country, your mother tongue, or your birth culture. I don’t want to be “natural,” I don’t want to be considered American, I don’t like it here. Interestingly, before you are considered a citizen in the country you are characterized as “an alien.” Not the green kind with lanky bodies and large black eyes; the 8 year old girl with dark brown hair and sad brown eyes kind. But for the past 9 years, I’ve felt like the green kind, I’ve felt judged, ostracized at times, and like I don’t belong in this world. One of the hardest parts of moving to this country at age eight was the culture shock; specifically, I remember going up to little kids in the third grade and trying to hug them because that was common for me and my friends in Brasil, and having little kids tell me that in America they don’t hug people. I love hugs, this broke my heart, I remember feeling so alone and misunderstood. According to the United States government, I am no longer an alien, I am a citizen of this country, it is “natural” for me to be here. However, now more than ever I feel green, I feel different and alone. My Brasileira friends don’t understand, my American friends don’t understand, my parents don’t understand and more often than not I don’t even understand.

Since I wasn’t 18 at the time my parents went through their own ceremony, I immediately became a citizen and received a passport at the same time my mother and father did, but unfortunately, I did not receive the official paper which could cause problems in the future. Flash forward to 2 days before I leave for NYC when I reluctantly opened an email informing me that my oath ceremony had been scheduled. Dread, fear, and a mixed range of emotions washed over me as I heard my parents muffled sounds of happiness and relief. Not even 24 hours later, I found myself, completely alone in that room (courtesy of COVID, no guests allowed), about to raise my right hand and renounce the only part of myself I genuinely love.

Why is it always the right hand? My right hand feels tainted now, dirty, like it’s the only body part who accepted that oath that day. I may have repeated those words after the officer, but they were empty words. And, as a writer I feel conflicted by that, losing yet another piece of my identity. I believe so strongly in the power of written and spoken words, but when I stood up that day and spoke those words with no conviction or significance, was I lying to myself about being a writer? Am I the biggest hypocrite there is?

After it was over I got a text from my mom that said “Seu coração vai sempre ser verde e amarelo” or “Your heart will always be green and yellow.” I know she’s right. I know the opportunities I’ve had here are spectacular. At home, I never would’ve been able to travel by myself across the country for summer programs, reunions with friends, and sports competitions. At home, I never would’ve gotten into NYU and I would still be living at home with my parents. I’m so grateful, don’t get me wrong. I get why my parents did it, and I’m glad they did but that doesn’t change the fact that I feel incomplete. I feel like two very separate parts of one whole. I miss my country and my family more than anything in the whole world. But if you asked me “Would you drop everything right now and move there if you had the opportunity to?” I would say no. Does that make me a hypocrite? I miss it, and it is and will always be my home. But here I can have a better future, a career, and I can be successful, there I would simply be happy and feel I belonged but happiness doesn’t pay bills or get degrees. Sometimes I feel shameful, knowing that as much as I miss Brasil I would never move there right now because the opportunities in the United States are undoubtedly better.

There’s a word in Portuguese that doesn’t exist in any other language. In my very biased opinion, it’s the most beautiful word in any dictionary. The word describes a feeling, a feeling of intense love and emotion when you miss someone or something. That word is “saudades.” Every single day of my life I feel it, and it tears me apart. I miss going to my grandparent’s farm every weekend and swimming in their pool with my cousins. I miss my aunt’s cupcakes. I miss Nicole, my younger cousin who used to be a mini version of me but who has grown into a beautiful young woman, and I wasn’t there to watch her grow. Saudades ripples through my nerves and veins, it vibrates within me and sometimes it causes an earthquake and I can’t help but cry. You’d think after saying so many goodbyes and living away from home for so long the “saudades” would eventually diminish, but actually it’s the opposite. The more time I spend here the harder it is to say goodbye when I get to go home and spend time with my family.

6091 miles. That’s how far Salt Lake City, where I’ve lived for the past 9 years, is from Sao Paulo, my home. I realize now that I don’t know what that number is in kilometers. Does that make me a fraud? That I don’t know what 77 degrees Fahrenheit is in Celsius? Does that make me more American than Brasileira? Miles, kilometers, degrees, grams and pounds can all be googled, but I can’t google the uncertainties and caveats of my identity. I can’t google what it means to be Brasileira but I have lived in the United States for more than the time I lived there.

My friends at home (Brasil) and now my Brasileira friends that I have made here at NYU make fun of me for the way I forget words in Portuguese sometimes, and for the way my teenage experiences in the US differ from theirs in Brasil. Often, I find myself getting irritated when they begin complaining about certain aspects of the US that are starkly different than Brasil such as the legal drinking age. I find myself defending the US to them, I say “well, you have to understand that the culture here is different,” or “you can’t expect every place to be like Brasil” and sometimes I want to say “if you hate it here so much, then why don’t you go back?” … and I hate myself for that. How could I feel this irritation about a place I have so much dread towards? What does that say about me and everything I have just described? Am I in fact more American now? The fact is, I’ve been living differently than them, I am “gringa.”

I have an all-consuming fear that I will develop an accent when speaking Portuguese, because then it will mean that I’m losing my Brasileira-ness. My parents both have accents when speaking in English, they are 100% fluent and have known the language since before I was born but because of their accent people immediately assume that they don’t know how to speak it. Don’t get me wrong, there is nothing bad about having an accent, I actually think they are important and say so much about a person. I’m just scared of getting one in my native language and being ridiculed by other Brasileiros. And sometimes, I wish I did have an accent when speaking English because then people wouldn’t assume that I’m American.

I am and will always be Brasileira. I am proud of my country, nationality and language. I will never be American. And, to be honest, I am still deciding how I feel about being Brazilian - American.

hi :) my name is beca and im a freshman at nyu! i love writing more than anything. in my opinion writing is the best form of self expression. here i will get to share what i am passionate about, i hope you enjoy.

More stories from Beca Damico and writers in Humans and other communities.