Life is a Rollercoaster

by Alex Hawksworth 4 months ago in lgbtq
Third Place in SFS 6: Green Light 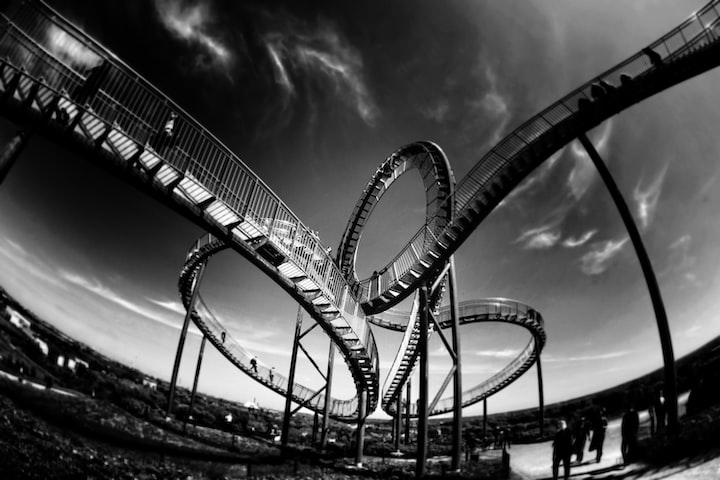 Photo by Mark Asthoff on Unsplash

“There you are! I was starting to think you’d stood me up.” Damian did not look the slightest bit concerned as he shouted across the parking lot. Nothing ever stressed him out.

“Sorry,” Joey said, jogging over. “Traffic sucked.” He wondered if the lie was convincing enough. The roads had been completely clear. Truth was, he almost had stood Damian up. He had barely slept, his mind full of horrible, imagined versions of what the day would bring, each more unpleasant than the last. The whole thing still seemed like a big risk to him; a nasty voice deep inside his head kept on insisting that it was all some kind of practical joke.

“Well, you made it,” Damian said. If he had any doubts about Joey’s excuse then they didn’t show. “You ready for some rollercoasters? I got us the tickets while I was waiting.”

They approached the gates of ‘Coaster World, the state’s largest theme park, with an awkward silence hanging between them. Joey pretended to be looking at the half-visible tops of the rides that jutted out above the park fence. He could feel the anxious, chest-busting sensation that accompanied being trapped in a social situation. How long would he have to stay before making a half-hearted excuse and bolting back home?

“Are you going to look that miserable on the rides as well?” Damian said. Joey was relieved to see that he was joking, a broad smile stretching across his handsome face. He blushed and cracked a smile of his own; it came easier than he expected.

“Sorry, just nervous,” he said, scanning his ticket and pushing through the turnstile.

“About me?” Damian finished the sentence when he saw that Joey wasn’t going to carry on.

“Not that… just… I mean I guess about you. But just being on a date in general. If that’s what this is,” Joey found himself hastily adding. He immediately wished he could take the words back; the day was ruined before they had even started queuing for the first ride. It was definitely shaping up to be a first date – a first ever date – to forget.

“I mean, I did call it a date when I asked you. Let’s ride the Bonecruncher first,” Damian said, leading them towards an enormous, spiralling coaster, its tracks painted in skeletal black and white. “It always takes hours to queue for it later in the day.”

“I want us to have a good day,” Damian said abruptly, just as they found the back of the line, next to the ‘ten minutes to go’ sign. He fidgeted a bit with his dark, curly hair; it was the first time Joey had ever seen him act awkwardly. “So, I’m just going to be really cringey and lay it all out there. This isn’t some kind of joke. I am into you. Nobody is going to jump out of the bushes screaming ‘gotcha’ with their cameras held up. You might not like yourself a lot, but there’s a lot that I like about you. So, stop worrying, or else I’ll have to think twice about a second date. I definitely won’t try to kiss you later if you don’t smile a bit more. Brooding and serious isn’t anywhere near as hot as people say it is.”

They had almost made it to the front. If they craned their necks they could get a good look at the platform.

“While we’re having this awkward conversation,” Joey said, “why don’t you tell me exactly what you like about me.” He felt brave, and a little bit sick, as he said the words.

“Fishing for compliments, are we? I’ll bite, but only because I want you to believe me so that then we can have a good time. For starters, you’re hilarious. I remember last year when Coach Bell was going on one of his rants about how America was the best country in the world at everything. He said something like, ‘can any one of you name one thing that America is not number one for?’ and then you said, quick as anything, ‘modesty’. I’ll never forget the look on his face as he sent you off to run laps. Plus, you’re the only guy in our year who is gay. Or at least that I know of. I have my suspicions about Billy Nichols, though. I reckon that whole star basketball player who is dating the hottest girl in the year is just an elaborate cover story.”

“That’s all you get for now,” Damian said, moving to the front of the queue. “It’s time to ride.”

They strapped themselves in. The tightness in Joey’s chest was still there, but it was different somehow. This was a knot of excitement that built and built as they waited for the light to turn green, releasing the car on its slow climb before launching itself down the first of many enormous plunges.

“No time to waste,” Damian said as they walked past the booth selling photos of people mid ride. “Park’s still quiet; we can probably get onto the Big Loop if we hurry.”

They dashed across the park, which was slowly filling up with families and holidaymakers. Nobody gave the pair of fifteen-year-old boys a second look as they raced along the wide avenues and themed boulevards. By the time they arrived at the next line, they were both panting and sweaty.

“How did you know that I was—” Joey trailed off, the question catching in his throat.

“Gay? You are allowed to say the word, it won’t attack you with rainbow flags and sequins.”

“I don’t mind saying it, I’m just tired from running,” Joey lied. “But yeah. Nobody. Well, nobody apart from you knows.”

“I mean, you do stare quite a lot during History. Last I checked, I don’t have the textbook stuck to the back of my head.”

“Oh,” Joey blushed again. “I didn’t know it was that obvious.”

“I only noticed because I do the same in Chemistry. Takes one to know one. Great back of the head, by the way, it really brings out the best in your shoulders.” Damian grinned. “Besides, if I hadn’t caught you then we wouldn’t be here, checking each other out in the line. You look good when you’re out of breath.”

“So, I’m guessing your parents don’t know?” Joey blushed and tried to get the conversation away from himself as fast as possible.

“I think my dad kind of knows, deep down. He tried to bond with me a few years ago by talking about how hot some women off this reality TV show we were watching were. It was so awkward I don’t know how he can’t have figured it out from that. Mum has no idea. It used to make me so depressed. Not like, ‘oh I’m really sad’ depressed. Like, ‘I don’t want to live anymore’ depressed.” He rolled up his sleeve to show a series of white, train track scars, before swiftly covering them again. “Can’t get a tan without the damned things showing up,” he half-joked.

There was hardly any queue for the Big Loop. They buckled in, watched the light turn from red to green, and cheered as they were blasted upside down. The whole time, Joey could not stop thinking about the things Damian had shared. He had never imagined that this handsome, confident guy who he daydreamt about in History classes had so much going on beneath the surface.

“You said it used to make you so depressed,” he said as they emerged out of the ride, their hearts thundering away, pumping adrenaline and endorphins through their bodies. “What changed?”

“Do you really want to know my secret?” Damian leant in close, his voice a conspiratorial whisper. “Lots of really expensive therapy. Who knew!”

“See,” Damian said, “I can be funny too. Seriously though, there’s no secret. I just got better at coping and focusing on the good stuff. It’s not fool proof and I still have days that suck, but it’s better than the alternative. Anyway, this is meant to be a fun day. What next? How about the Starchaser?”

“I get it though,” Damian said as they navigated the park. “It’s not easy feeling like you’ll never be accepted. That’s one of the things I found hardest. Still do, what with only a handful of people knowing the real me. That’s why I’m giving you a free pass for locking so nervous when you first showed up.”

“Yeah. It’s easy to suffocate when you’re trapped in the closet.”

“Hah! Tell me about it. I’ve been there too. At least, on days like this, we don’t need to pretend.”

Joey nodded. Damian was right. Truth be told, he had not felt this relaxed in a very long time.

“I used to come here all the time when I was struggling with the big d,” Damian continued, leading them to the back of the line for the Starchaser, a space-shuttle themed ‘coaster painted in blue and gold. “You realise, when you’re whizzing around a rickety old ride that’s run by a kid the same age as you, fearing for your life, that you don’t really want to die. That it’s just your brain playing tricks on you.”

“You should contact some medical journals with that,” Joey joked. “Sounds like a ground-breaking treatment that you should patent.”

“Mock me all you want, but you haven’t looked this happy since I started checking you out in Chemistry lessons last year.”

They reached the beginning of the line just in time to grab the pair of seats at the very front of the carriage. A bored kid a few years older than them lowered the padded harnesses down over their heads and they sat there in silent anticipation, staring at the set of lights that would change from red to amber to green when it was time to be jettisoned out into a rapid drop. Joey felt a cool hand reach out and curl around his. He blushed for a moment before wrapping his fingers around Damian’s. They watched, hand in hand, as the light turned green, and the track took them out of the station, shrieking with delight.

Tearing out of the exit was like being reborn; it was as though, even if just for the day, Joey had left his problems on top of the rollercoaster. They raced around the park, dragging each other by the hand.

He bought a massive swirl of the stuff. They sat, taking alternate bites out of it. For the first time that day, they talked about normal things: which teachers they were sure had it in for them, dreams for the future, sports, all of the usual stuff. It was easy when the serious topics had already been taken care of. For that day, everything was out of the closet: the skeletons and themselves. Even when the nasty, nagging voice crept into the back of Joey’s head, reminding him that one good day at the theme park wasn’t enough to change his life, Joey pushed it to one side and kept on savouring every moment.

“Want to go behind the arcade and make out?”

Joey gave him the green light. When they kissed, he tasted sugar and the promise of better things.

Full time History teacher and part time writer. I try to write the kind of stories I would like to read.