HH
by Holly Howard 14 days ago in love 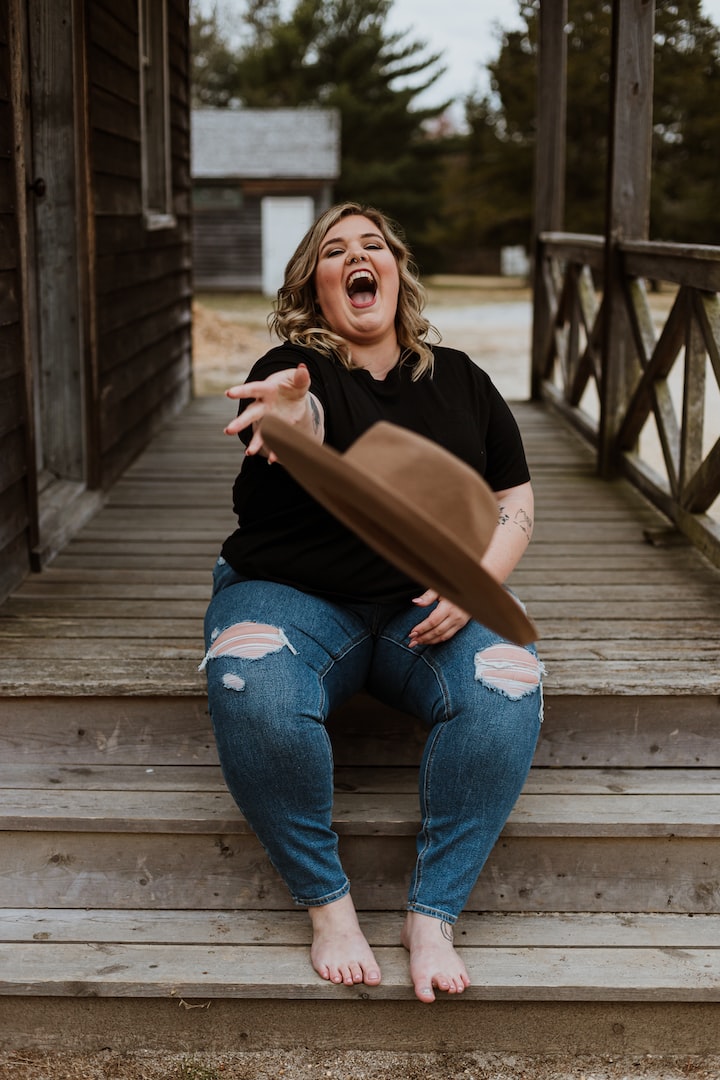 Photo by Jade Destiny on Unsplash

Being fat is not easy. You're never picked for teams, you can’t find clothes that are cute, and dating? Forget about it. Being fat is an immediate invitation to the friend zone. In public you always feel like people are watching while you eat and silently judging you. When I’m working I pack a salad and a fruit and always refuse my slice of cake when there are birthday parties. But when I am at home, by myself, I can eat whatever I like. I can make a huge stack of pancakes at midnight if I wanted, it's like being free to be myself after all day pretending to be someone else.

I have always loved food. My mother was a baker and she loved seeing our eyes light up when we woke up in the morning smelling her apple turnovers or cheese filled quiches. When I smell a fresh baked loaf of bread with a light egg washed crust or a cake that is intricately decorated with a rich cream cheese filling, I start to miss home, and I feel the urge to have that feeling inside of me.

When my mother had a heart attack and passed away, during my grieving period and I am ashamed to say, after my week long food binge, I decided I want a husband and a loving family of my own. My weight was just going to be in the way of this dream, I had to lose it, for my future.

I have tried numerous fad diets in the past, eating only cabbage soup for weeks, juicing five stalks of celery each day or the latest one, eating fat rich foods to lose fat. But I must have read the directions wrong on that one because I ended up gaining more weight than what I started with. I have tried exercise boot camps but I was too embarrassed to go back after the first day when I passed out and they called the ambulance. I also tried daily jogging but I stopped after my co-worker told me a story of someone who went jogging in the morning and came across a murder victim. Finally I went to a doctor to see if I can have a surgery done. He instructed me to keep trying to lose the weight then we could talk.

I went to my father’s house to check on him. There was a pink box tied in jute on the porch. I carried it inside and pecked my dad on the cheek. I untied the box and there was a dark chocolate cake inside, I tied it back up and left it on the counter. I decided to stay with my dad that night, we watched a movie and I put him to bed. I heated up my portion of my prepackaged nutritious meal, microwaved space food I like to call it and ate it in two bites. My stomach started to rumble in defiance and wanting more, I ignored it and tried not to look at the cake on the counter. I went into my old room and I laid in my bed, there was something comforting about being home and I fell asleep quickly.

I awoke because I heard a loud plop and my eyes popped open or at least I think it was a plop, I could have dreamt it. I scanned the room. The window outside had no light peeping through, it must have still been night time. I put my hand over my stomach and it made one long grumble noise and I could not ignore it much longer. I made my way to the kitchen and grabbed a banana but then I noticed that the cake was no longer on the cake counter. I looked around and found it on the floor, it seemed reasonably unharmed so I scooped it up and placed it back in the box. I saw my father’s cat was awake and figured that she knocked it off the counter. My mother’s framed picture was next to the cat, I picked it up and took it to my room, I wanted her to near me while I was here. I made my way back to bed and went back to sleep.

I awoke with another startle, my mother’s framed picture was knocked down. I turned on the side table light and there was the cake in the box on the floor of my room. It took me awhile to get enough courage to get off the bed to pick it up. I went into my dad to ask him why he put the cake in my room, but he was asleep. Confused, I took it to the kitchen and put it in the fridge and made sure the door was shut. I left the room and came back to see if it was still there, and it was. For extra measure I put the butter dish on top. I went back to bed hoping I could figure this out in the morning.

I awoke again shortly after, hearing my name called. I too was afraid to open my eyes at first. But then I felt something sitting on my bed. I thought it was my dad trying to wake me but when I opened my eyes it was still dark. I reached over and turned on the side table light and there was the cake at the foot of my bed. I hit it with my foot, and it didn’t move. My stomach growled and I gave in. I slowly untied the box and it was there mocking me with it’s light iced glaze. I stared at it grudgingly, then decided to end this madness. I took a big handful of the cake and shoved it in my mouth. I didn’t stop until all that was left was crumbs. I threw the box away and washed my hands. I laid back down ashamed and scared that the cake would mess up my stomach as revenge. But all I felt was warmth, like a hug from the inside.

When I awoke again, I was in my apartment. I looked at my phone, it was the same day as yesterday. I had a missed calls from my father, and the Doctor’s office. After hearing the voicemails I concluded that I never went to the Doctor or Father’s house. The cake was all a bad dream. I got up and washed my face, and thought of my mother. She was happy when we ate her food. I also wanted to make people happy with food, to let them not be ashamed of who they were. I went in my kitchen and looked up a recipe for a dark chocolate cake, I substituted some of the ingredients for some healthier options. Using an egg substitute, zucchinis, and almond flour and best of all dark chocolate cocoa. I made a great tasting cake one that mother would have approved. I wrapped it up and took it to the bank to get a loan for a business idea I have. And it was just my luck that the banker loved cake and he was single.