by Vanessa Sanchez 8 months ago in love
Report Story

I thought this was our love story but it turned into my spiritual journey. 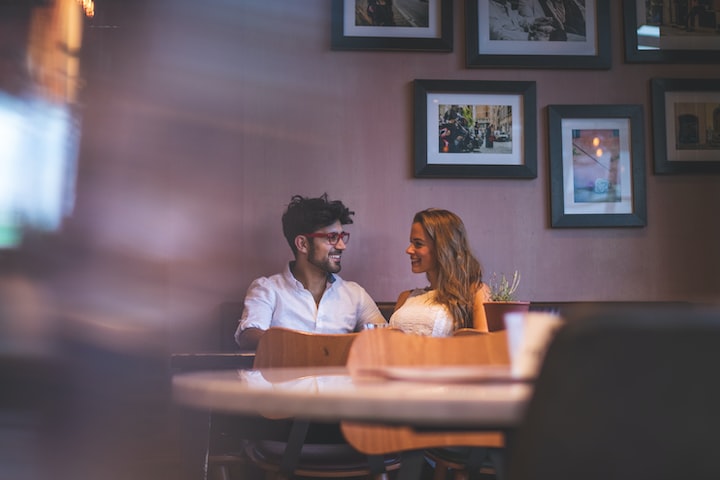 I was waiting at the cheese aisle while I was shopping with my mom, “wait here” she told me. I was looking at the cheeses when I looked up and this cute grocery clerk is walking right towards me. I still remember his warm smile and kind eyes. “Hey” that’s all it was, a simple “hey” and as I looked up and locked eyes with him it was an instant attraction.

Life Doesn’t Have a Plotline

This was my first mistake, there I had it all planned out in my head from the beginning, we would become friends, fall in love, and live happily ever after. You could imagine my disappointment when things didn’t turn out that way. We hardly ever talked and it seemed that timing was always off. It seemed that we were magnets in the way that we were attracted to each other but the closer we tried to get to one another it seemed that we were actually pushing each other away. This was not the fantasy I had in mind, everything seemed messy and I had no idea what page I was reading. There was no story to read because there was no story happening.

I Had Fallen For The Idea of Him

I was convinced that this was it, this was the guy I had been waiting for, if I had to dream up an ideal partner this was my guy. Even though I had only known maybe a total of five things about him there was no way you could talk me out of this fantasy. When I thought about him what I was really thinking that he was my way of living through someone. I didn’t realize this at first but I fell for the idea of feeling loved. At the time I was looking for a distraction in my life and was afraid of being in a relationship with another person, unconsciously I knew that I was really in love with the dream itself and not the person.

It’s Uncomfortable and Almost Painful to Be Vulnerable

In the back of my mind, I just wanted to indulge in a daydream and pretend that there would be a chance, I didn’t really plan on anything happening but to my surprise, he actually approached me. It all became too real, and it wasn’t like it was in my daydreams where I would know what to say, nope I had no idea. I was stunned in fear and my mind went blank, I felt vulnerable. I wasn’t ready at all to talk to him at that moment, I was so nervous I would do everything I could to avoid being open with him, even though it seemed that he liked me too it just wasn’t enough to let my guard down. When you’re vulnerable it’s the scariest place to be in, one of two things can come from vulnerability something beautiful or something painful. Both opportunities to grow.

There is No Closure

In the five years since I met him, he’s always been in and out of my life. It never seemed that there was this definite place we were at. It always seemed open to interpretation, there was no feeling of this chapter being done. After the first year, it seemed that he was gone but I always felt that I would see him again, another year had passed and the mess began, I was nervous and would run away, then the next day he would be nervous and would run away. There was no end to this mess until… he moved on or at least I thought he did. He ended up dating someone else and I was devastated, I cried for months. This was the end of my fantasy. I don’t know why I was so upset but I had to feel what I had to feel. I thought that was it, that was the end to this story. I spent a year crying and building myself back up. I had gone to therapy, indulged in spirituality, and focused on school. It was all going great right? I’m done with him and I can finally move on, well a year after that he came back into my life again. This time I had the intention to finally get closure, I wanted to get over my fear of rejection and was already preparing myself for it so I put myself out there. Well… that didn’t happen either. Frustrating right! It was always in between, with no clarity and closure. Nothing. It was again just open to interpretation.

I was driving myself insane because I had created expectations on how I thought these fictional events would play out. I wasn’t living in reality, and it was a hard pill to swallow that there was something deeper going on. I had been running away from opening myself up to people. I think I had been looking at this situation all wrong with my crush, I guess the reason why it never worked was that I was looking at the situation romantically. I don’t think this was meant to be a romantic experience but more so a spiritual one. I was really looking for my crush to MAKE me better but he really couldn’t. That’s my job. You know when you fall in love with someone it seems that nothing can really tear you down, it becomes easy to put your happiness and value in someone else’s hands. I just wanted to feel secure, validated, and that there was something exciting in my life. Deep down I knew he couldn’t do any of those things for me but I didn’t want to admit it until life did it for me.

Coming from someone who is still working on their mental health it’s scary to take control. I have no one to put the responsibility on, latch onto, or save me. It’s empowering to be able to fill your own cup but it was really hard to find the tools. I didn’t know how to feel good or stand on my own feet. How would someone be able to find the tools to feel secure with themselves? Well, I’m still figuring it out and of course, I have my tender moments. I love therapy, I wish I could do it all the time, I just can’t afford it year-round. I’ve been open about voicing when I’m struggling with my family. I used to feel embarrassed for how I was feeling sometimes but we all have felt down and have our own issues it's just that mine may be a bit different. I’ve been giving time to my passions and learning what it is I love in life. I’m still figuring it out and I have to remind myself that there is no finish line.

As ironic it may be for me to say this, this experience taught me that I shouldn’t put meaning onto everything in life after I just wrote a whole paper on what meaning I had gotten from this experience, in reality, this wasn’t a story. It was just life, things happen and I just happened to meet this guy who in reality was just going on about his life. I liked him, he liked me but we just couldn’t get our timing right. We were two people living our lives, and we will continue to live our lives. This experience has taught me that not everything has to be “fixed” or have a “solution”. Sometimes we just have to let things be and accept them. As much as I tried to find a way to end the story with closure or an answer there was none. Life is doing what life does. It just happens.

I'm an aspiring creator that is passionate about being the best you can be! I hope to push and grow to see my potential and hopefully inspire someone.

More stories from Vanessa Sanchez and writers in Humans and other communities.