Everyone has a Yellow Coat 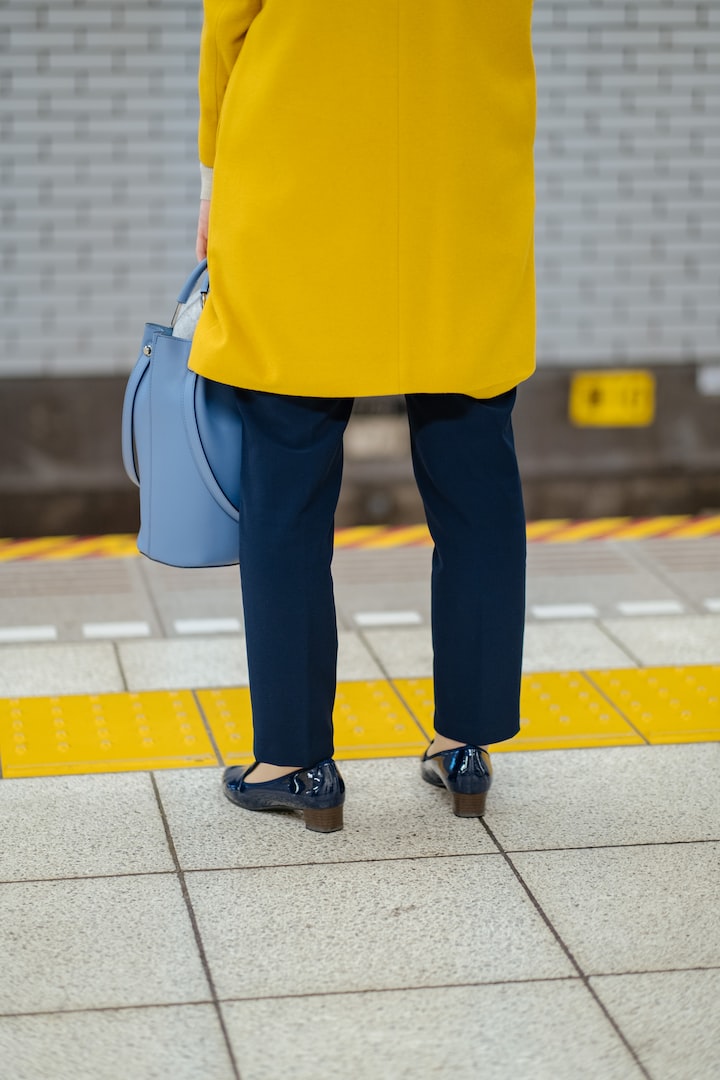 Photo by bady abbas on Unsplash

Listen to this story on Write Here, Write Now: A Vocal Podcast.

Coats brush on the subway, forcing our bodies to touch too intimately for strangers. We sing apologies in unison through fake smiles. I turn my music up and look at the sea of coats–all bunched together, clinging to the pole, swaying to the chatter of the tracks. One coat has seen the tattered love of siblings before, passed down until the thread loses strength. One coat weaves cautiously through the dirty crowd to preserve fur that is worth more than my rent. One coat unbuttons from a chest and drapes over the shoulders of a girlfriend's kiss.

I stare at the coats and think of him–the teen boy with sandy hair and the yellow coat. We shared high school weeknights together steaming espresso milk and sweeping floors for pocket change. He wore a yellow coat every day, and I must say, it wasn't easy on the eyes.

It had darkened to gray mustard, and the style was aged in an unflattering, embarrassing way–rather than a cool, vintage way. People teased him about the coat in good fun, some giggled behind his back in judgment. But without fail, in puddles or sunscreen, he wore the coat. He knew it was gaudy. He knew it was laughable. Yet, he wore it like religion.

One Friday night, my ride fell through and left me to bus home. The boy in the yellow coat was soon becoming a close friend of mine and offered to drive me. I accepted. We laughed through the small-town streets until it became quiet. Typical me, I blurted out in shameless curiosity, why the coat, man? He smiled and burst, isn't it ugly? Then he told me that I was the first person at work to ask him why he wears it every day.

So he told me why.

The boy's mother had MS. He told me about the kindest woman that spent every day trying to make a full house of love out of a bad deal. She was deteriorating as her limbs numbed and a wheelchair became her reality. Her memory was becoming foggy like a spring morning, and her eyesight was disappearing like her husband's hope.

The first colors lost when you sink into blindness are red, green, and blue. The yellow coat was a high school heirloom from the boy’s father and one of the only things he wore that his mother could see and recognize him in. He had a large family and wanted a way for her to always know when it was him, in order to save her the agony and repetition of asking.

I wanted to cry.

When we rolled to a stop in front of my house, he asked me to not tell anyone at work because it is his story to tell. Plus, I like the drama it causes, he teased through a cheeky grin. I nodded.

I sat in bed that evening, with the cool basement air making me pull the blankets further up my neck, and thought of the yellow coat. My coworkers called him unfashionable, embarrassing, and cringey. If they took the time to care or ask, they would know that he was generous, selfless, and loving beyond measure.

It is heartbreaking that we would rather judge and assume than get to know someone. I want my first instinct to ask, why the yellow coat? and learn about what I don't know or understand. I want to pledge to ask questions out of sincerity and humanize those who act, dress, react, look, or are different than me.

Everyone has a story. A reason. A plot twist. An explanation. A yellow coat.

Maybe the reason they have put on weight is because of an antidepressant side effect. Maybe they interrupt because they grew up in a family of many siblings and that was how they could be heard. Maybe their dog has a muzzle not because they bite, but because it eats everything it can put its mouth around and the owners are tired of vet bills.

I think of all the things people may judge me over, and the stories–no matter how beautiful, painful, or hilarious–that are behind each of them. If they asked, maybe they'd learn that I never wore my hair up in grade school because two mean boys called me ‘Dumbo ears.’ Or that I’d rather be judged for being late than be too early and have to experience the anxiety of small talk with strangers. Or that I drag my feet because I used to do it on purpose to annoy my sister, and it just stuck.

Everyone was a reason for who they are. And the more you know, and care, the more our differences all start to look similar. The things that make us human. The breakable, authentic, beautiful us.

And I am still close friends with the boy. I see him every time I fly back to my hometown for Christmas. He texted me on Tuesday and told me his mom is sicker than ever, but her love will survive after death–through her family, through the stories, through the yellow coat.

I want to vow to forever to keep opening my eyes, seeing the stories between thread and under skin, until my mind drips honey. I know it isn't as easy to explain as a tangible action. I am not scheduling trips to the local soup chicken or making a five-year plan to reduce community waste. I can't put Vow to Ask People Questions and Learn about the Things that Make them Human on my resume.

But maybe that is the point. It isn't a grande scheme single gesture or something to put on a list of achievements. But a way of life. A promise for change. A commitment to reach out my hand and love beyond the surface, even when it is so easy to turn away and make up their story on our own.

I want to know why leggings are a staple in your fashion, why you like Indian food so much, why you don't want to get your driver's license, what your pronouns are.

We will become a much more understanding, loving, and accepting world, if we stop whispering the word ugly behind the backs of those wearing a yellow coat and start asking questions. We all have one, or many. Hell, I have an entire closet full of yellow coats just waiting for someone on the subway to brush against mine with theirs and ask me where it came from.

What is your yellow coat?

More stories from Flora and writers in Humans and other communities.