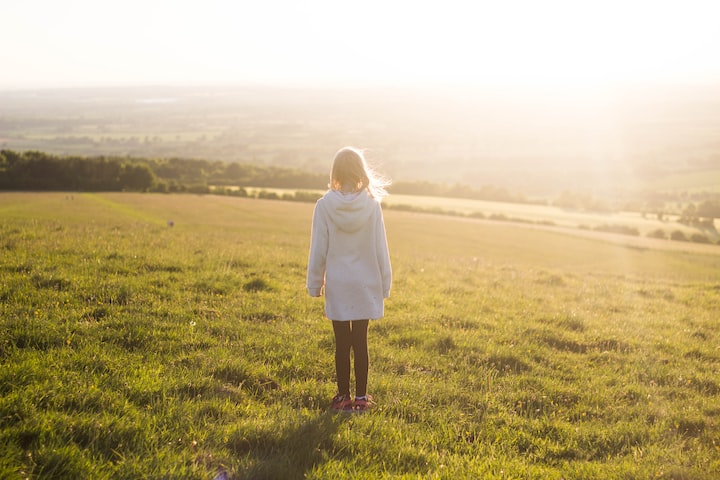 Photo by Sam Headland on Unsplash

Sadie got ready for her early class at Chester University. She was a third-year Sociology and Psychology double major with a plan to become a youth Mental Health Practitioner. She grabbed her keys and books on the way out of her apartment, locked the door, and ran down the two flights of stairs. She pushed open the exit door with her hip and walked out. Blinded and momentarily startled by the low morning sun, she missed the one step down to the sidewalk and flew head-long toward the ground.

Her textbooks skidded down the sidewalk and her notebook flayed open and landed on the dew-soaked grass. She landed hard on her knees and fell forward. Sadie's hands hit the pavement, and she felt her palms scrape then burn as she fought to stop her face from smashing into the sidewalk.

On all fours, she looked at her textbooks lying a few feet down from her and then over to her notebook on the grass. Sadie shook off some of her confusion and shock and sat back, resting her butt on the heels of her feet. She rested for a second then leaned forward, pulled one foot forward, and pushed herself up, feeling the consequences of hitting the ground so hard. She looked back at the door with confusion.

Three years I've come out that door. Three years and that has never happened.

Shaking her head and rubbing her sore hands together, Sadie limped over and picked up her soggy notebook. She had nothing to dry the pages, so she conceded the loss and flipped them closed. Still limping, she walked to her textbooks and painfully bent down, picking them up one at a time. With one last perplexing glance back to the door, she walked down the sidewalk to her car.

The horn honked twice as Sadie unlocked the doors remotely. She opened the back door and tossed her books onto the seat. She slammed the back door closed and simultaneously opened the driver's door. She got in and took a moment to rub her aching knees.

I am definitely going to feel that tomorrow.

The engine sputtered up to a low, grumbly roar after Sadie turned the ignition a few times. Clouds of dark grey exhaust puffed from the tailpipe. Her faded red sedan had got her this far, but it showed its age. It ran rough, but going to university and doing it all on her own, Sadie barely paid her tuition and bills—a new car was not an option right now.

She stared down the quiet street and nearly got whiplash when someone tapped on the driver's window. She spun around, cracked one of her already bruised knees hard into the steering column, and let out a tiny yelp. Through the whiffs of grey exhaust, she saw a young girl smiling at her and holding a small black notebook clasped against her chest.

Sadie had instantly recognized the girl and took a few calming breaths as she rolled down the window. “Emma? What are you doing here!?” Sadie asked confused and extremely concerned. “It's seven in the morning!” Though the time was the last of Sadie's concerns. Emma was one of the children Sadie had become very close with while volunteering at the Children's Hospital. Emma had recently turned twelve and was very sick, with a not-so-great prognosis and relapsing at an alarming rate. Even with a new and aggressive treatment regime, the outlook was not great.

“Your notebook got wrecked, and I wanted you to have mine,” Emma said softly and apologetically. “I only used two pages.”

Emma reached out both her arms to hand Sadie the notebook. Sadie saw it was Emma's journal. Emma would carry it with her everywhere and was always jotting down her feelings, her thoughts, her fears, or whatever floated through her mind. She probably filled one every week.

Sadie was with Emma yesterday when she filled her latest one and watched as Emma joyfully tore the plastic from a new one. Each one was identical—small enough to carry around with a black hardcover and a design to resemble textured leather. She asked Emma once if she would like a more colorful one, but Emma refused and told Sadie it's what's inside that mattered.

Emma held out the notebook. “Please, I want you to have it.” Sadie was still confused but reached her arm out the window and grasped the top of the notebook. Emma's smile widened, and Sadie saw a single tear, glistening in the sun, run down Emma's cheek.

“Emma, why aren't you at the hospital?” Sadie asked, but before she got an answer, her cell phone rang.

Who's calling so early?

Sadie turned slightly and placed the notebook onto the passenger seat. She arched her back and pushed herself up to grab her cellphone from the back pocket of her jeans. She recognized the number that showed up and answered immediately.

“Sadie?” the voice on the phone said quietly. “Sadie, it's Helen. Emma's mom.” Sadie turned her head to look out the driver's window and saw only an empty street and whiffs of dark grey exhaust. Emma was gone. Sadie whipped her head back and forth but didn't see her anywhere.

Where the hell did she go?

“Yes, Helen. Sorry. Hi,” Sadie talked as she looked around until she saw Emma standing in the middle of the schoolyard. Emma waved at Sadie and blew a kiss before she turned and walked toward the bright morning sun. “I was just about to call you and...”

“What!? Wait, I – I don't understand?” Sadie went numb and tears started down her own cheeks. “She was...” Sadie stopped, twisted, and stared at the black notebook sitting on the passenger seat. “W – What do you mean she didn't wake up this morning?” Sadie asked so softly she could barely hear herself.

“Sometime last night,” Helen fought to get the words out. “Emma – she passed peacefully.”

“I – I don't...” Sadie struggled for words as reality conflicted fiercely with what she was being told. Confusion flooded her mind, and panic started to overwhelm her.

That's not possible!? She was here! I have her notebook.

“I know you two had become very close,” Helen explained with more strength in her voice. “Emma adored you so much, and I wanted to express my heartfelt gratitude for the friendship you shared with my daughter. It meant the world to her—and us.”

“But...” Sadie still had no words. She stared at Emma's notebook. She didn't know what to say to Emma's mother, so she quietly and solemnly told her how much she cared about Emma and was going to miss her greatly. Helen told Sadie she would be in touch soon and thanked her again for everything she had done for her daughter.

Sadie hung up and dropped the phone into her lap. Tears streamed down her cheeks, and she looked out to where she had last seen Emma standing and then to the notebook. She gingerly reached out her arm and touched the cover of the notebook with her fingertips and slowly traced its edges.

None of this makes sense. The notebook is here. Emma was right here.

Sadie reached over to pick it up. Her hands shook as she pulled the top edge toward her and stood it up on the seat. She looked at its simple and professional black cover as more tears flowed down her cheeks. Panic pulsed through Sadie's body as she picked up the notebook and placed it onto her lap.

It's here. She was here.

She took a deep breath and opened it to the first page. Sadie's mouth dropped and the world just froze. There, on the page, was a very intricate and perfectly detailed sketch of Sadie in the car with Emma by the window clutching the notebook. It showed a beautiful aura around Emma with the glow emanating from the notebook.

The detail was remarkable. Sadie carefully brushed her fingers across the sketch. She couldn't understand how she was seeing what she was seeing. She felt so disconnected from reality yet very much connected to the sketch. She continued to run her fingertips across the page until she reached its edge. With trepidation, she turned to the next page and found a short letter.

I'm so sorry, but I won't be there tonight. Last night, I died. I know you're going to be sad, but it's okay. It was time. I don't want you to feel sad, because you gave me so much more than you realize, and I don't think I could have ever completely expressed my appreciation for it all. You were there for me. You were more than my friend—I thought of you as my big sister. You made me feel happy, but more importantly, you made my mom and my dad feel happy. They saw how you could make me smile, and that made them smile. I will never forget that, and I will never forget you. I love you, Sadie.

P.S. Your phone's gonna ring. It'll be a number you don't recognize, and I know you don't answer those, but Sadie, you really need to answer this one.

Oh yeah, one last thing, it's the same as the one I used.

No words could describe what was going through Sadie's mind after reading that. She turned the page, and it was blank, so she closed the notebook. Her cellphone rang, and her whole body jerked. Her heart pounded hard in her chest as she stared down at the ringing phone in her lap—she didn't recognize the number. Her hands shook so violently she needed both of them to grab the phone. Her mouth went dry, and she slid her finger across the phone's screen to answer it.

“Y – yes?” Sadie answered. Her tongue felt like it was coated in desert sand.

“Sadie, this is Mark from CTVX, Chester University's all-day-all-hits radio station. How are you doing this fine morning?” He asked with radio-host enthusiasm.

“Well, I'm going to maybe make your 'sureness' a whole lot more sure if you can answer this semester's Trivial Trivia Question.”

“Here we go!” The host said while trivia-like music played in the background. “On the first day of every school year, Chester University has a tradition where each professor receives a black notebook. Which company has provided these notebooks to the university since the tradition began?”

The trivia music got louder. She knew of the tradition. She'd often see the professors carrying the notebooks around.

Emma was standing right there.

She remembered many professors would use the tradition and the notebook as an ice-breaker for their first class.

She talked to me.

The trivia music faded and the host asked, “Sadie. Time's up. Do you have an answer?” Sadie shivered and stared down at the notebook on her lap.

She used the same ones.

“Moleskine,” Sadie practically yelled as she looked down at Emma's notebook. “They hand out Moleskine notebooks.”

“You. Are. Correct!” The host said emphasizing each word. “Students of Chester-U, Sadie Kingston has just won herself twenty thousand dollars. How is Sadie feeling now?”

Sadie placed her hand softly onto the black cover of Emma's Moleskine notebook. A single tear ran down her cheek, and she smiled.

“To be idle is a short road to death and to be diligent is a way of life; foolish people are idle, wise people are diligent.”

More stories from Jay Sonn and writers in Humans and other communities.