by Carolina A. Ortiz 12 months ago in lgbtq

Only by speaking out can we create lasting change. And that change begins with coming out. 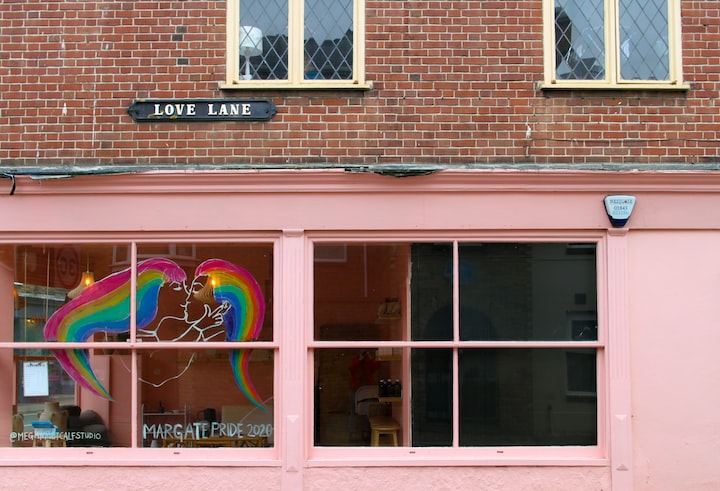 Photo by Alyssa Bossom on Unsplash

Hiding is something I was always good at, whether it was the silly game we play as children or pretending I wasn't uncomfortable by the man that was molesting me for years. Hiding was my normal, until the day I moved out from my toxic household and found myself, my confidence and became a better me.

But then I found myself in the same cycle.

What is a lesbian? According to my partner's mother, it is a confused individual that needs to see correctly. A woman's job is to find a man, take care of him and make babies. When her daughter told her we were dating, despite suspecting the relationship and expressing support, she told her she would pretend not to know. Because how selfish could her daughter be, not giving her the grandchildren she wanted. The relationship was strained and though most days there was no conflict, living with an alcoholic meant with enough drinks the yelling would begin.

Now I know this sounds bad but we came out about two years ago, it was an uncomfortable position but it didn't become bad until 2020. The year where we all had to be inside. most of us not working and forcing to interact more. It would be snarky and rude comments towards me, full on fighting with her daughter about how she was choosing me over her own blood and how being closer than a few inches to her 'baby' causing dirty looks. In our room, we could show affections but at the hint of her mother being anywhere near our room, we would jump apart as if she could see through the walls and know we were sinning. We were especially more careful lately, after one drunken evening where she talked about kicking me out of the house. The person who did all the cooking, all the cleaning and did her best to cater to her. I would serve her and her boyfriend food, always bring her a water bottle that was already open because it was too hard for her to open with her arthritis and make sure the fridge was filled with water. After all if I didn't do it, she would complain loudly and then get angry because even though she was 50, she acted like a child that needed to be catered to.

The breaking point was one evening that she was drunk (of course) and had forcibly grabbed my keys because her boyfriend was going to check my oil along with the rest of the cars. The tension had been rising already for a while, I was tired and stressed out. The way she took my keys made me so uncomfortable, I could feel the tightness growing in my chest as I followed her outside to make sure they were careful with my car. Her boyfriend and her started to argue about something loudly, causing the neighbor across the street to come out which added more fuel to the fire. I started getting anxious and I told my girlfriend I needed a minute so I went to the room. The minute the door closed I just started having a full blown panic attack, tired of the way I was being treated and the overall stress finally getting to me. My girlfriend found me and tried to help me calm down, which was working until her mother suddenly came into the room without knocking. We separated quick enough to avoid that kind of drama, however she had something to say about my condition.

"Why are you like this? You don't do this, why are you so upset? Why is she so upset?" She asked, her voice raised and condescending. "Can she not talk? We can't help her if she can't say what's wrong."

This woman was upset that I had a mental breakdown, when she recently started having panic attacks and I would spend time in her room calming her down because she didn't want her daughters help (note she almost punched me during one of her attacks). However the fact that I was having a breakdown was inconceivable and inconvenient to her. She slammed the door when she left and I had to go apologize a few hours later to calm the storm. The next day she would joke about me not having another mental break down over something stupid again, making me ridiculous angry. My partner and I talked late at night, when the house was safe for us and we made a plan to move out with our friend. The goal was February 2021 because the abuse we were dealing with wasn't healthy, we could no longer sit still through it.

Well now we are in 2021, so how is this dream coming along? We have furniture for our new home; a couch, bookshelves, coffee table, almost every cooking utensil we might need and packed up a lot of our current things. Personally I'm excited to unpack the kitchen area, as the designated chef everything we bought is pink and I'm excited to use it all without fear of it being broken or ruined in a drunken fit. We have a small savings to go towards the deposit, been looking around for good priced places but our dreams still feel very far.

We had a sudden vet bill come in which killed a part of our savings, pushing our plan back by a month. We then had another expense which we don't know the amount yet, holding us back even further. Realistically, my partner has said it feels like we won't be able to move until maybe November and I stayed up until 4 thinking about those words. Another year, spending most of my time avoiding a woman who tries to pick fights with me for no good reason besides the hate that resides in her. I don't know if I can make it that far, going through another potential holiday season with her.

I refuse to give into hate, to force myself to hide in my skin like I did years ago. I promised myself that I was going to get out this cycle, that I would make this year about being true to myself and true to my partner. I have picked up some more side hustles, creating more things with my hands to sell and I will find a way to prevail. Because this year, before summer I will find a way to pay off these debts and leave this household behind. I will be free and the first thing I'm going to do? Kiss my girlfriend in the middle of our new place, something I can never do here. 2020 was the year that put things into perspective but 2021 will be the year everyone will see my true colors.

Hi, I'm Lina a 23 year old artist whos heart belongs to the sea. I create content that inspires and gives voice to things I believe need to be talked about more.

Read next: The Game of Love