by Nati Saednejad 10 days ago in love

When the winds of change blow, where will you direct your sails? 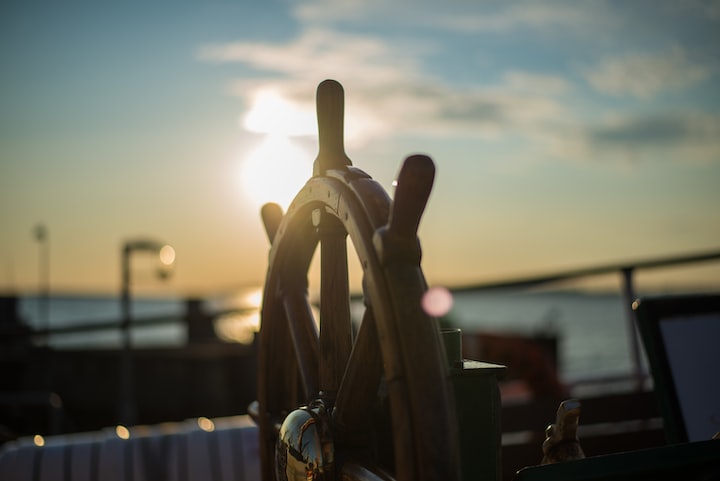 Photo by Maximilian Weisbecker on Unsplash

He was coming home. She could sense his ship on the horizon before it appeared. The white, billowing sails. The way the sunshine bounced off the bow and back into the sky. The subtle groaning of the ropes as they strained against their ties. Every detail was etched into her memory like carvings on an oak tree.

Would he be the same, this sailor who she once thought her soulmate? The man whose tanned skin once touched hers in the night, but now had grown dusted in salt from the sea? More importantly, was she the same? When he'd left, six months ago, she said she'd be here waiting. She was. When he'd said that he felt lost, confused, she said she'd always keep a space for him in her heart. Had she?

They'd never been a conventional couple, Laurie and Tom. She was structured, taciturn, with all aspects of her personality neatly organised into boxes of her own design. Tom, by contrast, was effervescent, loose, carefree. They'd met during a hedonistic summer in Ibiza; a rare period of frivolity in Laurie's life of order and discipline. She'd fallen for the easy glow that had emanated from Tom, and he had loved unlocking the boxes that Laurie usually kept so guarded in her mind. These opposites attracted, and had done ever since.

That is, until, 5 years down the line, Tom had tired of settled living. Laurie had sensed his unrest growing and bubbling beneath his seeming acquiescence to do the most mundane of tasks: the half-hearted smile as he cooked her yet another dinner, the slight shrug when he said he didn't mind doing the dishes. She could sense his mind pacing within the four walls they called home, trapped and tethered to her.

It had almost been a relief when he had announced, six months ago, that he was taking the boat his father had built by hand, and leaving their life on the quiet side of the island to sail around the world, with no particular destination in mind. The feeling that Laurie was the jailor keeping Tom under lock and key in a 'normal life' had grown unbearable, and she longed to set him free so that she too could experience freedom. She knew that she'd never have the strength to let him go, however, so when Tom took the reins and sent himself off, Laurie had felt absolved of the heavy burden of responsibility.

The day he'd left, Laurie had sensed the weight lifting off their relationship with every glint of sunshine that hit the deck on which Tom stood. This would be how they would heal their love. This distance would bring them back together, she was sure of it. As Laurie had watched The Sunsetter disappear beyond the horizon, she knew that on its return, it would bring with it hope, healing, and an even more beautiful horizon. She had only crossed her fingers behind her back for luck.

But, as with all things, time has a way of removing the illusions we hold about the future, and showing us its reality in stark, unwavering clarity. 180 days, 2 hours, and 10 minutes had passed since Tom had turned his back to land, and Laurie feared that she was about to do the same to him.

On the rare occasions that Tom had contacted her during his travels, Laurie could tell that the wind and sea of new horizons had changed him. His voice breezed over words with a smiling lightness she'd almost forgotten he possessed. As he would tell her of the ports lined with palm trees, or the dolphins that accompanied him through calm seas, Laurie could see that the world was filling his soul in a way that her love had not done in a long time. Her hurt surged, yet grew confused by the happiness she felt at hearing her man feel so fulfilled. Her mind ached.

What Laurie hadn't realised until now, however, was that she too had begun to change. It was as if Tom's removal from her everyday scenery had allowed new winds to whip around her, to blow away the covers that hung over the mirror of their love, allowing her to see their relationship truly reflected back at her.

She loved Tom, she thought, yet when she drew a mental portrait of that man, Laurie realised that she only truly loved the parts of Tom she'd drawn out herself. Over the last 5 years, Tom had done the bending, the shape-shifting, the compromising to fit into the life that Laurie wanted. She'd fallen more and more in love with him not through the deepening of their connection, but through decoy. Laurie had moulded a man into her perfect partner, and in doing so had trapped him in the world she'd designed.

As the days before his return diminished in number, Laurie's heart slowly moved from her chest to her throat. How could she tell Tom that, now that he had returned, she would be the one to leave? Now that he was ready to come back to her, she needed to go and be by herself? She would be demolishing the man that she'd made into her own, and leaving him behind to build up his life again without her.

Perhaps, she countered to herself, Tom's thoughts were echoing her own as he approached the island they called home. After all, how could the routine their relationship represented ever compete with the sunrises and sunsets he would have watched from docks across the world? How could a bird, once released from its cage, ever feel content within four walls again?

So, now, as she stood on the same spot that she had done six months ago, Laurie realised that everything had changed. As the sun beat down on her amber curls, she felt the cool metal of her keys between her fingers and, for a moment, felt torn. Torn between looking towards the horizon, for the man she'd thought she loved, and the car that was laden with every possession she owned. Torn between the comfort of settling, and the fear of flying free on her own. Torn between one more chance, and the chance of never knowing for herself what lay beyond the horizon.

As the wind picked up pace, and blew the streaks of sunlight across her brow, the familiar glimmer of white came into view. He was coming home. Every gust drew Tom nearer to her, every wave welcoming him back. But Laurie would not join in with the warm welcome. The wind was carrying her elsewhere. Taking a deep gulp of sea air, and watching the bow of Tom's boat push forward towards the shore, Laurie knew what she was doing. She was bowing out.

See all posts by Nati Saednejad →