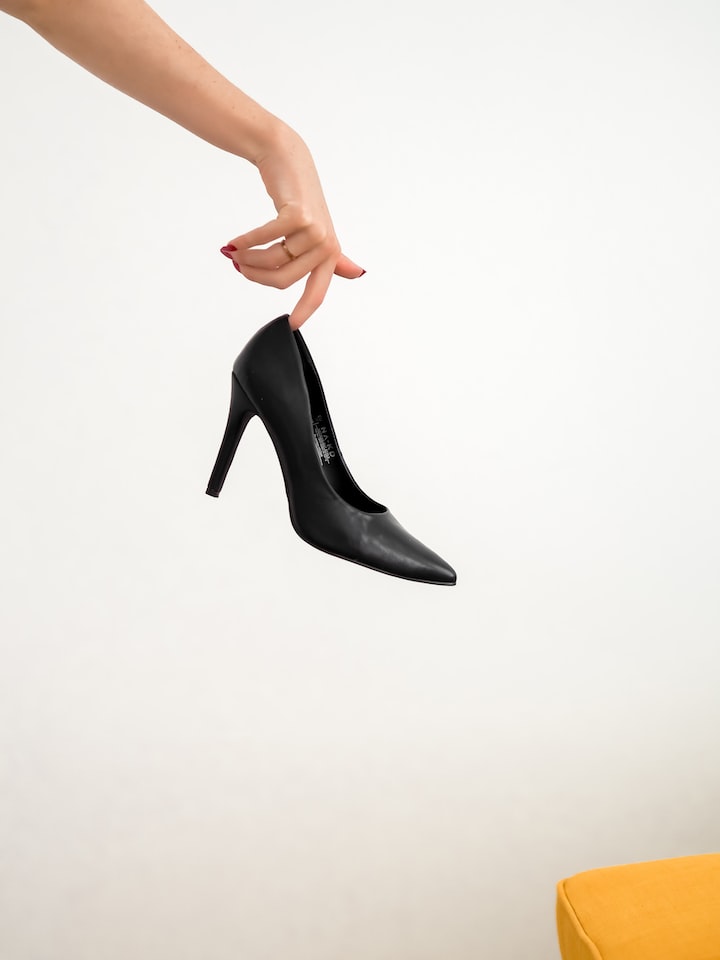 Gemma set off for the interview. She had to get this job because she was right down on her uppers and though having no food in the fridge was doing marvels for her figure, she was in danger of passing out from lack of nourishment.

She had gone for every audition advertised and every ‘lead’ that people had given her, but nada, nothing … she was either the wrong colour, the wrong build, the wrong sex, the wrong …. The wrong everything. So back to proper ‘work’. She could just about type – not all ten fingers but she was fast enough to fool most people.

Rushing down the stairs to the train, horror struck, she caught her heel, and there she was hoppity with one flat shoe, one 4inch heel. Really somebody up there must have a real down on her. She must have offended somebody badly in a previous life. Should she take it as an omen? What could she do? With some effort she ripped the heel off the other shoe – when you don’t want the wretched heel to come off, it comes off too easily.

She trekked on. The shoes felt strange because the soles without their heels were not quite flat. It was like rocking along. If she were not so harassed it would be funny – doubtless it looked funny to everybody else. Head up. Pretend everything is normal. If people want to stare, let ‘em!

When she arrived at the interview, she was ten minutes late – not a good start. Other interviews there had been a queue of people waiting, and waiting, and waiting. Those interviewing had absolutely no hurry – let them wait! Now, nothing so useful! Now they were waiting for her. They had finished early with their other candidate. They did not quite say “You’ve blown it because of your tardiness” but may as well have done so. One look at her dishevelled appearance, and her rickety rockety shoes and she may as well have had a label attached to her forehead … loser!

They did not exactly “Thanks, but no thanks’, but there was something about the way they said “We’ll be in touch” that sounded insincere.

She rocked her way home again in misery. She would have stopped off for a coffee and a danish, but … those were the days when she could afford that.

Arriving home, she was horrified to see all her (well ‘ALL’ makes it sound as if she still has a lot) possessions piled up on the doorstep. There was not even enough to attract passers by to help themselves.

Gemma was well past crying now. Tears and anger, pleading and eye-lash fluttering had got her precisely nowhere, and her very gay, very hard bitten, very avaricious landlord was not interested in any of it. However, she banged on the door nonetheless, and, to demonstrate his steely determination, he opened the door, standing with his arms folded, reminiscent of Old Mother Riley!

“I warned you and warned you, Gemma, for months. Six weeks rent owed … you’re out!

“But where and I go … it’s December, Christmas is only three weeks away – can I, please, pretty please, Jace, just stay until the New Year… I’ll look for something … and pay you, honest, I will – before then. You wouldn’t throw me out in the snow before Christmas .., please, pleeeeease!”

“I’ve heard all that before. You’ve had your chances. This is not a charity!”

“No, the rest will go towards what you owe me.”

“Can I at least have my suitcases to put this stuff in?”

“You mean the Louis Vuiton bags … absolutely not … I’ll give you a suitcase, but you’re not having those. They will go towards the rent arrears.”

With that he went inside and returned some minutes later with a battered black bag – a bit like a doctor’s bag, but much bigger, and with a longer strap, as well as handles. He threw this at her and slammed the door shut.

Gemma crammed what he had left her into the bag and started off slowly up the street. She had no idea where she was going or what she was meant to do next.

She was grateful that she had taken her good handbag, mobile, wallet, and all her identification papers to the interview. Because she was somewhat ‘oriental’ in appearance (her ancestry being dubious) she had often in the past been suspected of being some kind of ‘illegal’. She got into the habit of taking her ‘proofs’ with her … just in case.

What could she do now? She had to take the risk. She had no cash. She had her (truly unfriendly credit card) – so she chose a scarily seedy hotel to try her luck. You never know, the card might pass checking in – or they may not want to take a card for security. If they ask for cash up front she was finished.

There was a leery, spotty faced youth in … well, she supposed it they would call it ‘Reception’ – though it looked more like a kitchen table tucked into an alcove, with a chair behind it.

She put on her most woe-begone face and trudged in. Hoping that the right level of ‘pity’ without any suspicion that she was penniless’ might at least get her a room with a door that locked. It worked. But she suspected that she would need to keep her door well and truly locked and bolted by the way the spotty youth weighed up his prospects.

She climbed the stairs to the third floor and found Room 12. It was slightly better than she was expecting – in that it did not look as if somebody had just got out from the bed and the corner sink was clean enough. There was even a towel – all right only a hand towel – but then there was no bath or shower either – draped over a chair back between the sink and the window. The curtains did not close – being ornamental. I she got undressed she would either provide a striptease for people in similar establishments across the road or need to remember not to turn on the light … which was a naked bulb, no lampshade. She found that in a cupboard, the fixings having broken away.

She tipped out the ‘stuff’ from the doctor’s bag and was intrigued to find an item that she did not recognise. There was a little, leather bound black notebook. Definitely it had seen better days – but somehow all the more interesting for that. She did not attempt to put any of her stuff away – where would she put it, and since most of what she had had been ‘confiscated’ anyway, there was not much point. Most of what he had left her with was worthless anyway. Apart from the black notebook. She had never seen it – to the best of her memory – in her life before.

She slept badly, fearing every movement, afraid to put the light on, and without earplugs it would have been virtually impossible for any normal person to sleep anyway, the road being awash with strip joints, bars, take-out food shops, and karaoke clubs.

The next morning, she decided that she perhaps had no right to keep the little black note book, because it was not hers. She wandered back to bang on Jason’s door – perhaps he would be in a better mood. Perhaps he would have had a change of heart.

He appeared, no more mollified than he had been the previous day.

“Well, have you got my money?”

“Now Jason, short of selling my body – how would I have got your money overnight ….”

He looked as if to say, “Yes, you’re right. You wouldn’t be worth a fraction of what you owe me.” So … what do you want then?”

“I found this in the bag and thought it might be yours and that you might want it back.”

Jason eyed the notebook that she was holding out to him in a very suspicious way.

“It’s not mine – if you haven’t got my money, then I am not interested in anything else you might have.”

Jason returned, and literally threw a pair of her own trainers at her – for which she was grateful, and a warmer weatherproof jacket with a fur hood (not her own of course, but even so if was better than the ‘best’ jacket she had chosen to wear for the interview which was not at all serviceable in the December weather). She still tried to insist that he took the notebook.

“It’s yours. It’s nothing to do with me. Just throw it in the trash if you don’t want it.”

With that he slammed the door. She had something to put on her feet. But she still had the notebook.

Gemma put on the warmer coat over her jacket and was glad to have it. She even found gloves in the pocket, as well as some loose change and a note – amounting to ten or eleven dollars. She was rich!

She went into a coffee shop to get something warm inside her, and to try to think what to do next. She could not even pay for the room she was in last night and the prospect of staying any longer there was horrible to contemplate.

As she sat trying to make the coffee last she started flicking through the notebook. It was almost like a code book. No real ‘writing’ just lists of numbers, grouped in batches, some crossed off, some underlined, some circled in red. She wondered if Jason cold be a spy! Was it really and truly a code book!

The last page of maybe 30 – the rest of the book was blank – had just six numbers written in the centre of the page. These were circled in red, with a gold stick on star affixed next to them. Next to that was the message in very small but beautiful script …. Yes, yes, yes! At last!

Gemma had no idea what it was all about. She shrugged, shook her head – still failing to picture Jason Rosenberg as a spy!

Finally she felt sufficiently embarrassed to leave the coffee bar, and meandered off back down the road, throwing her rickety rockety shoes in a trash can as she went. Where to now. No sense in going back to the ‘doss house’. It was unprepossessing enough at night without spending the say there.

She passed an amusement arcade, and though she could not spare any of her almost non-existent money for such trivia, she went in to kill time and watch other people wasting theirs. She wandered around. Her eye fell on an advertisement: The National Lottery. “Just think how that would change your life”.

Even afterwards, she could think of no real explanation why she had been compelled to use those six gold-starred numbers in the book so vehemently disowned by Jason to spend almost the last of her only cash in the world.

There was only one main prize winner for that lottery draw.

The caption in the newspaper said

Just how fate smiled on GEMMA LAWSON when a lucky find gave her the winning numbers in the lottery. Gemma went from her last five dollars to 2.5 million dollars.

The picture of Gemma was taken outside the ‘doss house’. Gemma did not return to claim her belongings from Jason. He never challenged her right to the millions.

More stories from Eileen Frances Quilter Williams and writers in Humans and other communities.