An Angel in the Ointment 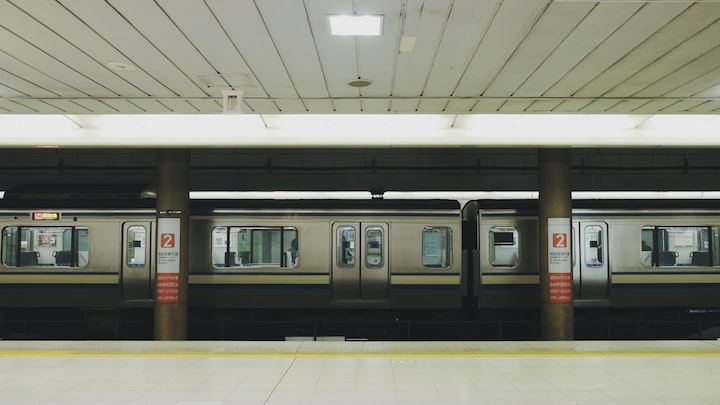 Photo by Lex Sirikiat on Unsplash

At 9:57 AM on a Tuesday, The Angel With The Bag Full Of Cash entered the last car of the 2 Uptown. Dispatch had told him that he’d look like the target, but they hadn’t told him what he would look like.

The Angel took stock of himself. Below his surgeon’s mask, he wore dark clothes and duck boots. There was a messenger bag with a red seat-belt-buckle clasp strapped across his back.

He looked this way and that, craning his neck like someone who heard a fire alarm chirping in another room. Finally, The Angel spotted a man in dark clothes and duck boots halfway up the car, sitting with a messenger back across his lap. The bag had a red seat-belt-buckle clasp.

The Angel approached the man like a park ranger might approach a wounded deer. He knew the man’s name was Jonathan, but he didn’t want to use a direct approach if he could avoid it. Human beings may have small brains, but they seemed to be chock full of questions.

After The Angel sat down next to Jonathan, he said, “Nice bag.”

He’d seen humans do that before. Sometimes it got a laugh, though The Angel didn’t know why. Jonathan nodded and smiled, but didn’t say anything.

The Angel saw the man’s mask billow out as he sighed.

“No thanks, man,” Jonathan said, and he slid a few seats further away from The Angel. The Angel slid right on with him, happily ignoring the implied goodbye.

“Listen, I’m sorry,” The Angel said, “I started that wrong. Let me try again. I’m stuck in the middle of a misunderstanding, and I thought maybe you could help. Now, whatever stop I get off at, the cops are going to want to talk to me. Not because I’ve done anything illegal, just because of the misunderstanding. But that’s all going to be fine, they’re going to let me out in a few hours with a laugh and a pat on the back.”

“But no apology,” the man said.

The Angel laughed. “Of course no apology. Police don’t apologize, they make trouble. The other thing they’re going to do is search my bag. When they do that they’ll find my father’s notebook and twenty thousand dollars in assorted twenties, fifties, and hundreds.”

He saw the man’s eyes widen above his mask.

"If you know anything about the cops, you know they don’t just let that kind of cash walk back out of a precinct without a good explanation. Unless I can provide a 1099, they’re going to assume it’s drug-related. Now that’s where you come in.”

The Angel With The Bag Full Of Cash turned his full stare toward the man. Something about the depth in his gray eyes always made humans loopy.

“The money is gone no matter what. I was given it with this bag, so I can’t prove it belongs to me, but the notebook is all I have of my father. If they find it with the money, it will be impounded and I’ll never see it again. But if we switched bags, they’d never find either. I could keep the notebook and you could have the cash.”

The man thought this over for longer than The Angel expected. He’d been told this would be easy, Jonathan would be out of work and aimless. Between that and the pandemic, he should leap for free money. Finally, the man spoke. “I’m good, dude. Sounds like an amazing deal for me, which is how I know better.”

The Angel was speechless. He’d never expected Jonathan to believe he’d found the money, of course. For some reasons humans refused to believe that someone might just give them money, so they always assumed illegality was involved.

But still, that shouldn’t matter. The Angel had been promised that Jonathan would be a gimme who just needed a little temptation, a little push. After all, isn’t that what The Angel deserved after his assignment in D.C.?

“What’s wrong with you?” The Angel asked.

“Excuse me?” The man was

“I don’t have any excuses for you, I’m looking for answers.”

The man was offended, but The Angel didn’t care. As long as he was engaging, The Angel still had a chance to complete his task.

The Angel opened his messenger bag. On top of the neat stacks of green bills lay a little black notebook. The Angel pulled out the notebook and closed the bag.

Technically, he wasn’t supposed to reveal too much when he was on epiphany duty. It tended to defeat the purpose when you spelled everything out for the subject. But then, you shouldn’t attach cables to a live battery, and people did that when they had to jump start cars.

“You should be easy, it says so in here,” The Angel tapped the top of his notebook. “I want to change your life, but you won’t let me. Whatever, I’ll just go back to dispatch and tell them you were a bust. ”

The subway car was slowing down, The Angel figured he’d give Jonathan until the next stop to respond. If he didn’t, The Angel would mark him as incomplete and pass the job off.

After the car stopped moving, but before the doors opened, the man said, “Dispatch? First you were hiding from the cops, and now you’re working with them?”

Ah, okay. So the man was still interested, but he was stuck on the police. The Angel decided to wow him with a little shock and awe.

There were two patrolmen standing on the platform, so The Angel had them suddenly remember that they were looking for a man with a messenger bag. They hadn’t actually been looking for one, but memory is funny that way.

“Maybe I am wanted..." The Angel said as the policemen entered the car. They looked intently around, before focusing on The Angel and Jonathan. The Angel With The Bag Full Of Money snapped and said, “or maybe I’m not.”

The snap wasn’t necessary, but it looked good. The cops stared at each other in confusion. The one with the mask below his chin said something to the other, who shrugged as they exited the car.

“Why do you care?” The Angel asked, “You don’t want to be involved anyway.”

He was being a little childish and petty, yes, but it tended to get results. That was one thing they’d learned from The Adversary, humans love a mystery.

The Angel took out his phone and began pointedly ignoring his seatmate. He only had a phone when he was portraying a human, so he was just getting the hang of scrolling through it when the man said, “Alright, no lies, no flashing a bag full of fake money-- what do you want?”

The Angel looked surprised. “The money is real,” He said.

Jonathan brushed that away. “Okay, sure. That doesn’t answer my question.”

Well, thought The Angel, if he wants to know... “I don’t want anything, I’m literally incapable of want. All I’m here to do is give you a gift. You’re supposed to want the cash, then you’re supposed to take the cash. And finally, despite my warnings, you’ll look in the notebook”--he held up the little black book again--“and realize there’s more to the story.”

The Angel opened the notebook. It was a day planner, with four entries that all related to Jonathan’s schedule that day. The rest of the notebook was empty. The Angel tapped the second entry. “This is us here, meeting now. You’ll look this over and get suspicious, because how did I have meeting you randomly in my day planner? So you’ll go to the next appointment…”

The Angel pointed at the notebook again.

“... And because you’re standing exactly where the book told you to, you’ll cause a cyclist to get hit by a car. He won’t have insurance, and you’ll feel guilty about causing it, and confused because you’re only there because you read the book, and then you’ll feel even guiltier because you weren’t supposed to read the book, and you’ll get so turned around you just give him the cash to feel better, and then you run away. Which is where the notebook comes back. You’ll end up back on the subway before you remember there was a fourth appointment. You’ll look and see it’s for that subway car, at that moment, and suddenly I’ll be there.”

“And then I’ll have my epiphany?”

The Angel nodded. “First I’ll say things like ‘a tree only falls if someone is around to hear it’, but eventually, yes.”

The Angel always tried to say things that sounded deep, even if he wasn’t quite sure what they meant. Humans seemed to expect it.

“So what, I’m supposed to realize money isn’t everything?” The man asked.

“That’s part of it…” The Angel paused. If he went any further, there’d be no chance of a self-realized epiphany. He considered his experience with the man so far. There seemed to be very little chance of one regardless.

The Angel continued, “The main thing is just getting a glimpse of The Grand Plan. It’s enough to realize there’s more out there and you’re a part of it. Think about it like this: your whole life you thought you were a car, so you believed you were meant to drive wherever you want. But I’m here to reveal that you’ve been a train all along. Trains aren’t designed to go any which way, they’re designed to follow the path that was laid out for them. You’ll feel peace and realize all the little things you worry about like what to eat, where to live, all of it is being taken care of by someone else. All you have to do is chug up and down the track.”

The man considered this. He considered The Angel, and finally, he considered the notebook. “And that little thing was supposed to be the impetus for all of this?”

The Angel nodded. “Yeah see, you’d realize that people in the notebook are being referred to by their birthdates, and you’d wonder how I had yours.

Jonathan was still looking at the notebook. “You don’t have mine.”

The Angel looked at Jonathan-- at the other man-- like, well, like the man had just appeared out of nowhere and told him that there was a grand plan for the universe and he was a part of it.

“Jesus,” He said, “My supervisor is going to have my hide. It’s these masks. I can’t tell anyone apart. I had the same issue during the Spanish Flu. What are the chances there’d be two people who looked alike in this car with the same bag?”

The Angel looked around the car. About 80% of the commuters he could see were dressed like him, but he didn’t see any other messenger bags. He knew that Jonathan would be getting off at Columbus Circle, so he still had a few stops left. “Listen, I still have time to make this work if I hurry. Nice meeting you…”

“Yeah, Phil, good luck out there.”

The Angel laughed. “It’s the grand plan,” He said, “everyone is a part of it. It would be chaos otherwise. Don’t be afraid to take part in it, you already are.”

And then The Angel With The Bag Full Of Money faded into the crowd like a radio losing its signal, searching for someone else with a messenger bag and a red seat-belt-buckle clasp.

Receive stories by Josh Workman in your feed
Josh Workman
Read next: The Fight Against Identity Vs. Nationality