A Matter of Perspective

by Edward Palmer 5 months ago in humanity
Report Story

Ruminations amongst the gravestones 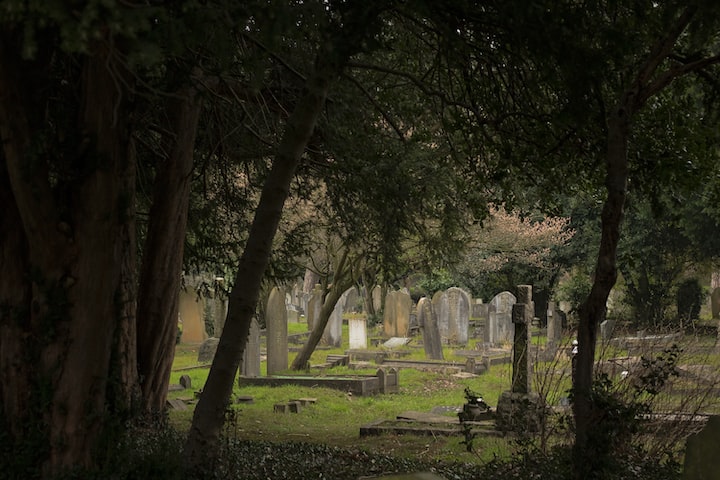 Photo by Edward Howell on Unsplash

Jay-Z and Alicia Keys sing of concrete jungles where dreams are made of. If so, then cemeteries must be the jungles where those dreams end. Like most people I see the value in closure that funerals give us, but cemeteries themselves have never provided that release. A landscape of completed lives commemorated through stones and plaques had seemed relevant solely as a historical curiosity, but my perceptions had changed since I received terrible news about my uncle. A visit to Centennial Park, south of Adelaide in South Australia where he was buried, seemed necessary.

I put on sunglasses and started the car. I chose an album, turned the music up and allowed the harmonies of the Beach Boys to fill the car and push discordant thoughts from my mind. I felt compelled to see where my uncle was buried, like an iron filing being drawn towards a powerful magnet; a force that couldn’t be denied.

Centennial Park is located 10 kilometres from Adelaide and is the biggest cemetery south of the city. It has 40 acres of space devoted to over 140,000 resting places. It can be easily accessed from a main road, and from that vantage point it looked like any recreational park. But there were no picnics, and no children running around. I drove onto the premises along the one-way road, passing through the gaping, iron-wrought gates, and parked the car under one of the many large coral trees. Some of these may have been planted over 80 years ago, when the park first opened and they provided me with ample shelter from the sun as I stepped out of the car.

Looking around, I had several choices. I could have gone into the centrally located Jubilee Complex, where many services occur. The building is squat and broad. Crab-like it extended its claws over the environment. Inside it is drab, but serviceable, like an old sports coat that is both comfortable and still hints at once being stylish. It hosts many of the memorial services in its three chapels and they also store all the records of where people are buried. I didn’t want to tal to anyone about my uncle, so cast my eyes to the left.

In the distance, I could see a white cross thrusting out of the ground. Its style reminded me immediately of memorial gardens for service men and women, and indeed that is what it signified. Derrick Gardens, hosts more than three thousand headstones, and I was immediately reminded of the scale of death in war. The graves were lined up, like good soldiers, many with flowers on them as far as I could see, each still waving a flag to the country they served. My uncle wasn’t a part of the armed forces and looking out at the sea of sacrifice, I was immensely glad for that fact. He didn’t belong there. I paused for a moment to acknowledge the lives of good men and women and then took the other path.

Under a series of sail cloths was a walkway. Many plaques were embedded in the thick beige brick walls that lined and defined the path. I paused momentarily watching a young man, maybe 18 and an older woman, maybe his mother, talking to each other in front of a memorial plaque. What were they saying? Perhaps sharing stories or perhaps just those platitudes that are simultaneously meaningless and comforting when grief descends upon us. I was in no hurry and waited till they had moved on, holding hands tightly, drinking from the nearest well of life to get them past the hurt of bereavement.

I walked the length of Contemplation Court, as I discovered it was called. I felt nothing walking past hundreds of plaques mounted in the walls. Were the gravel remains of cremated bodies within those walls? I didn’t know. These plaques invoked none of the feelings that the soldiers’ graves did. They smacked of efficiency and bureaucracy and perhaps even poverty, and I was pleased top reach the end of them.

The walkway became less defined. To the left and right were statues, perhaps a metre high. They were made in the style of Chinese urns mounted on grey plinths, carved with flowers and trees. Any airs of pretentiousness were subdued, solely because they were set back several metres from the path. Around them were Chinese Pistachio trees, green and lively, drifting slowly in the breeze, their branches occasionally allowing brief glimpses of sunshine and clear skies. It was pleasant and although I couldn’t fathom why there were statues of pigs (or were they bears?) scattered at random amongst the trees, it felt respectful and calming. I almost felt at ease, although I was well and truly lost.

Caught in my thoughts, I bumped into a man walking along the pathway towards me. A gardener, I assumed from his overalls, secateurs and weed killer. “Sorry” I muttered, looking down at the ground. “No problem sir” he said kindly. “Can I help you?” I paused, unwillinging to ask for support, but he kindly waited, and I eventually told him I was looking for my uncle. He took the details; radioed some central area and they promptly told him exactly where he the burial site was located. “Medka garden, sir” he said “Plot 312”. He offered to walk me there, but I got directions instead, not wishing to make eye contact. and wanting desperately to be alone at the end of my short quest. Fortunately, the Park was so large solitude wouldn’t be an issue.

I had to walk back to a spot near the entrance, past rows and rows of marble gravestones; clean and gleaming in the sun, some with flowers at their bases. If the glory of eternal life was shining there, as Shibayama might have said, I missed it; far too focused on my destination. My uncle was buried very near the main road, although well away from the gates I’d driven through. Whoever had designed this area understood noise management. I was less than 100 metres from the road and couldn’t hear any of the busy hum of cars and trucks. Instead, I was in a realm of wooden decking, cobblestone paths and ponds that looked like they would be more at home in the Land of Oz, than in a cemetery. In a lighter moment I may have allowed the charm of the area to take hold, but a darkness of heart had descended on me and it was all I could do to place one foot after another on the clean and polished cobblestones. I found the grave near a stretch of water some 20 metres long, bound by moss rocks, smelling of wet dirt and serenaded by frogs. All of a sudden, I did not know what to do.

What I had planned I really don’t know. Some gesture. I had thought of spitting on his grave or kicking it over, but I did none of that, stunned as I was by the photo I saw leaning on the gravestone. I knelt in the soft dirt, rage disappearing and being replaced by a deep grief I couldn't contain. I picked up the photo, faded and crinkled, yet untouched by the elements. Stained by time it showed a young girl, in a short, striped skirt popular in the 1960s. And scrawled over the front of the photo were two words, scrawled into the card so hard you could feel them on the back. “I mattered”.

I sat down in the dirt and wondered at the state of mind of this woman, surely in her 50s or even 60s, when she came here. Was she screaming vitriol at this dead child molester or was she crying, knowing she’d been vindicated? I didn’t know. Would never know. But all the anger in my heart was gone and I think I finally understood what the value of a cemetery was.

I’d come here wanting to express my disgust, but I would have walked away, back through the charming gardens, with little change to my psyche, but for this unknown woman, this unknown soldier. She had said things that couldn’t have ever been said when she was young. Words that had maybe taken years to work their way loose of the protective bedrock of her scarred mind to finally escape in the one place where they might have mattered to her. I sat there for nearly half an hour, as my dark thoughts cleared, swept away by this woman’s imagined catharsis. I contemplated taking the photo, before finally replacing it. I left, knowing I would never return.

As I walked back to my car, past the pig/bear statues, I realised that I could now see the value of some cemeteries. Centennial Park may be a jungle of concrete where the gravestones lie, but perhaps not all the dreams are dead. There is a power there, that other spaces do not have, that allows for the past to be put to rest, and a sometimes uncomfortable peace to be made in ways that may not always be as expected.

More stories from Edward Palmer and writers in Humans and other communities.