A Literature Review of Non-Binary/Genderqueer Studies

by Jasmine Smoot-Leyva 10 months ago in lgbtq

How can we really help the non-binary/genderqueer community? How do they fit in with the LBGTQA+ community? 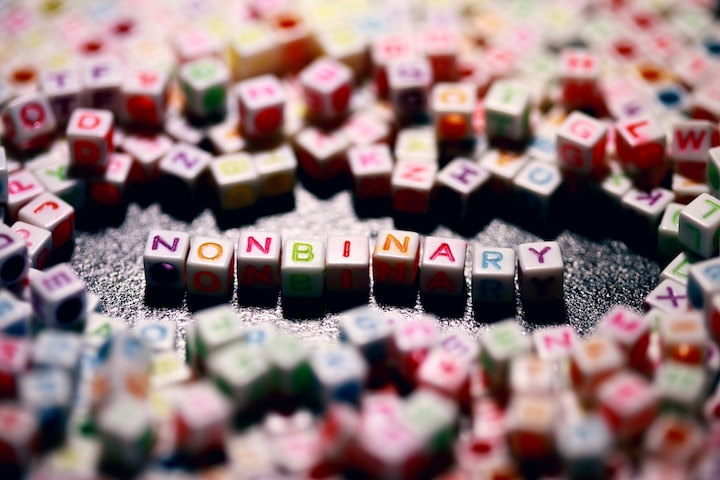 In the last two or three decades, rights for the LGBTQA+ population has skyrocketed. Gay marriage become legal in the United States, the inclusion of GSA (gay-straight alliance) clubs became a staple in most public schools, nondiscrimination laws were passed in various states… the list goes on! However, one particular group within the LGBTQA+ community always seems to be overlooked: the non-binary/genderqueer population.

Perhaps we all imagine gender in a rigid, uniform way: you’re either cis, AKA the gender you were assigned at birth, or you’re not (AKA transgender). But non-binary/genderqueer individuals are somewhere in the middle of the spectrum; not identifying with either male or female. Additionally, intersex individuals (people who are born with both or no sets of genitalia) would also fall within this category. Therefore, people within this category may not identify with our typical “she/her/hers” or “he/him/his” pronouns - so, most have opted to use a gender non-specific pronoun: they/them/theirs.

Many might ask, “so, what’s on their birth certificate/driver’s license/passport? ‘Male’ or ‘female’?” For genderqueer/intersex individuals, this is a loaded question. Many might opt for the sex they were assigned at birth, or they might choose the gender they most identify with. While this might sound like a viable solution to the average CIS person, having a third option available - a gender “X” - might be the answer we’re looking for. Recognizing a “third gender” would allow individuals to choose “X” instead of “M” for male or “F” for female on certain government and identifying documents. In this essay, I will outline the benefits of legally recognizing this gender “X”, the potential problems with implementing these changes, as well as the problems with existing laws and legislation that attempt to be inclusive of the LGBTQA+ community (including non-binary/genderqueer individuals).

The purpose of this study is to outline how we push our gender-binary system on the LGBTQA+ community, and look at the differences in the way that non-binary/genderqueer individuals are treated compared to their transgender/gay counterparts within the LGBTQA+ community. Additionally, I would like to explore ideas on how to improve the lives of non-binary/genderqueer people, why changes are necessary, and problems we could face when we make these changes.

How the LGBTQA+ Community Still Conforms to The Binary

A massive majority of the population does not realize just how much we push heteronormativity and “trans-normativity” on the LGBTQA+ community. These terms both essentially mean the same thing: that members of the LGBTQA+ community still need to fit into our heterosexual standards (for example, with a gay couple, there is always the “woman” or “man” in the relationship, or “the one who wears the pants”) or our CIShet standards (for example, most trans people are not seen as “valid” until they have gone through hormone therapy/gender reassignment surgery, and are expected to fit into gender norms; such as a male-to-female transgender person must wear makeup, dresses, and have long hair, and avoid any kind of masculine traits in order to fit into our binary system). This idea of being strictly “male” and “female” with no inbetween, especially within the LGBTQA+ community, is incredibly harmful and is almost the complete opposite of the goals that non-binary/genderqueer individuals hope to achieve.

In Health of Non-binary and Genderqueer People: A Systematic Review, the authors attempt to outline the idea of transgender individuals fitting within our gender binary system:

”...most of the research on the transgender health tends to consider transgender individuals as belonging to a homogenous population or to straify them on the basis of the gender spectrum to which they identify with (trans women vs. trans men; male-to-female vs. female-to-male), thus falling within the gender binary system.” (Scandurra, et al., pg. 2)

Additionally, an article in Gender Panic, Gender Policy: PART III explains that some transgender individuals and non-binary/genderqueer individuals do not fit into our typical gender binary system:

”Some transgender people do not identify solely as one binary gender or the other. Individuals who fall under the genderqueer or non-binary umbrella, for example, may ‘have a gender which is neither male nor female and may identify as both male and female at one time, as different genders at different times, as no gender at all, or dispute the very idea of only two genders’” (Demos and Segal, pg. 230)

While this study makes the argument that implementing a gender “X” marker “supports the notion that there are two distinct gender groupings” (Demos and Segal, pg. 236), it’s important to note that having a gender “X” marker could be the key to avoiding discrimination for non-binary/genderqueer individuals who may be seeking medical treatment or intervention.

One study found that the desire for medical intervention was much smaller in the non-binary/genderqueer community than the transgender community.

In the same study, non-binary/genderqueer individuals were found to have a more difficult time accessing hormone therapy compared to their transgender counterparts. Perhaps it’s due to the fact that not many non-binary individuals actually seek out hormonal therapy - or, it could be due to the fact that non-binary/genderqueer people are taken less seriously for not conforming to the binary.

It’s also important to take note that in the Gender Dysphoria category of the DSM-5 (Diagnostic and Statistical Manual of Mental Disorders, 5th Edition) pushes for hormone therapy, cosmetic surgeries, and gender reassignment surgery to transgender individuals in order to fit into the gender binary. (Demos and Segal, et al., pg. 236)This perpetuates and completely undermines the idea of non-binary/genderqueer individuals who fall outside of the binary, and have no desire to fit in; as well as gives medical personnel the idea that non-binary/genderqueer individuals are invalid and should not have access to hormonal and other medical treatment.

A study done by Narrain, Arvind and Chandran, Vinay outlines the many different changes our legislation can make to improve the rights of transgender, intersex, and non-binary/genderqueer individuals. Among these few ideas include the right to define their own gender identity and the right to inclusive and competent medical care (including the rights to modify their bodies “cosmetically, chemically, or surgically”) (Narrain and Chandran, pg. 329), among others. These changes would specifically help non-binary/genderqueer individuals with their gender expression and identity. However, in the study done by Demos and Sega, they propose a “better” solution: degendering all together. By preventing legislation from separating the population into two binary genders (male and female), we could allow more leniency and prevent any kind of gate-keeping or discrimination. Additionally, studies have shown that sexual harassment is more prevalent in same-sex prisons than in co-ed facilities. Using this example, we can argue that having single-stall, inclusive, non-gendered bathrooms would be more beneficial to society. (Demos and Segal, pg. 244) Demos and Segal’s main point of interest, however, is the newly-found recognition of gender “X” in Australia and how it’s incredibly harmful.

By requiring non-binary/genderqueer individuals to mark their gender as "X" on government documents such as passports and drivers licenses can lead to further policing, discrimination, gate-keeping, and harassment for said individuals (Demos and Segal, pg. 233) - especially when it comes to medical care. For example, a genderqueer person seeking hormonal therapy might be turned down or “disqualified” from treatment if they do not have the gender “X” marker on their identifying documents. In addition, the management of adding the gender “X” marker would prove to be difficult and could progress very slowly. There are several levels of administration: federal, state, and even private organizations (such as colleges and workplaces) - and getting them all to agree on a uniform policy would be extremely strenuous. Lastly,

“...the third gender category ‘functions to protect ‘first’ and ‘second’ categories from becoming analytically muddled or contaminated’ by implying that the dominant gender categories are ‘inviolable and unproblematic’” (cited in Demos and Segal, pg. 234).

This idea reiterates the concept that there will always be pressure within the LGBTQA+ and even CIS communities to conform to the binary and adhere to standard/normalized gender roles - and, if you don’t fit into said gender roles, you belong in the “third gender” or gender “X” category.

In conclusion, there is still enormous pressure to fit into the gender binary system - whether you’re in the LGBTQA+ community or a straight heterosexual individual. In addition, the non-binary/genderqueer community has a long way to go in comparison to their transgender/gay counterparts - and there are a lot of steps we, as a society, could make in order to improve the lives of our non-binary/genderqueer population. However, there are potential problems with our solutions and, as always, there is so much more room for more studies to be made in order to make the right decision.

Narrain, Arvind and Chandran, Vinay. "Nothing to Fix: Medicalisation of Sexual Orientation and Gender Identity" Pushing the Boundaries of Transgender and Intersex Persons Rights. http://www4.osuokc.edu:2052/login.aspx?direct=true&db=e000xna&AN=1201897&site=ehost-live&ebv=EB&ppid=pp_231

I’m a professional photographer, filmmaker, musician, podcaster, and author based in Dallas, TX. I'm obsessed with tattoos, my two huskies, and being my own person.

See all posts by Jasmine Smoot-Leyva →