Another night of throwing back copious amounts of hard alcohol while the ghosts come out of the woodwork and swirl around Raul; he wonders if this is the reason why they’re both called spirits. 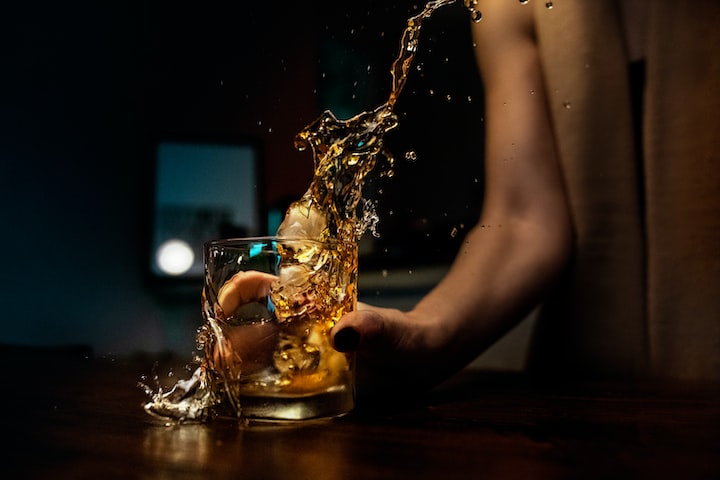 Another night of throwing back copious amounts of hard alcohol while the ghosts come out of the woodwork and swirl around Raul; he wonders if this is the reason why they’re both called spirits.

In fact, he’s only ever asked one person about the ghosts that come out to speak to you when you drink alcohol, his girlfriend-turned-ex-girlfriend-turned-girlfriend-again, Yvette. It was that very question, “You know how when you drink, the ghosts that come out to talk to you are always different depending on where you are?” … that was the question that changed her from girlfriend to ex-girlfriend. And it was this lie, “I was just under so much stress and in a weird place in my life” that changed her from ex-girlfriend back to girlfriend.

That was when Raul learned his lesson… only he experiences this, and this is not something people are receptive to. This lesson came through to him, loud and clear. Just like the spirits.

So why is he here, inviting the ghosts to speak to him more and more with each sip of his gin? They’re distracting, especially when you have company you’re drinking with. Trying to explain to someone why the 1994 version of “Little Women” is not only the superior “Little Women,” but also the superior movie from 1994… sorry Schindler’s List… is really difficult when you have multiple spirits whispering to you how they were killed. Besides the distraction, they’re oftentimes downright terrifying. It’s because he needs to talk to one ghost in particular.

A half-formed body, whiter than snow, remnants of a derby hat atop his head, lingering to Raul’s right. Staring dead into his eyes. Not speaking. Just staring. Jaw clacking back and forth. Yvette stares solemnly into her phone while Raul tries to ignore the malicious eyes burning a hole in his head. The rag lays on the table next to Yvette, half-wet, from cleaning the bar tables. The stale smell of alcohol is in the air, and the stench of the loud and obnoxious patrons that just left moments ago.

Yvette always enjoyed helping her dad, Oliver, run the bar… when he was around. Now that he’s gone, it’s not fun, it’s a chore, it’s a memory of his death. In fact, just to Yvette’s left is the spot where they found him, bloodied on the floor, gash in his head, stiff as the creaky boards beneath the tables. Ruled an accident. Caused by the large amount of alcohol in his system. Aside from the fact Yvette’s dad never drank on the job, everything else about the situation didn’t pass the smell test.

The cops were reluctant to look into anything Yvette asked about. The gash on Oliver’s head didn’t make sense that it could’ve happened from hitting the floor, or the bar, or a table. Something sharper must’ve caused it. It felt like a homicide. There were no signs of forced entry, but the money in the register was short.

“Probably because your dad was drunk.” One cop had the nerve to say. Raul almost punched him right in the jaw.

Speaking of jaws, that one is still clacking away next to Raul’s ear as he sips more gin. The man in the derby hat comes into focus a little more.

“Did it to myself.” He whispers. He imitates a gun going off in his own mouth.

Raul becomes uncomfortable. He swears he can feel the breath of the spirit on him. The air near his neck does feel different. Cooler. Worse.

Raul finishes the rest of his gin. At that moment, a figure starts to appear next to Yvette. It comes into focus. Raul can see the lines from those plaid shirts that were an Oliver-Classic. The legs are a little hazy, but the arms and the neck and the face start to come into focus. He is looking right at Raul. He’s still transparent. Raul’s heavy hand pours more gin into his glass, and he gulps it back. Yvette looks up.

“Maybe you should slow down a bit?” Yvette suggests.

Nope. Her dad is so in focus now, he’s almost opaque. Raul can even read the expression on his face. Mainly sorrow. Some fear.

Oliver glides across the room towards Raul, stopping just before him. The man in the derby hat remains by Raul’s side, clacking his jaw. Another ghost rolls through the room, 20 feet behind Yvette, with a quiet and sprawling scream of despair.

Raul hates this part. All the ghosts are out.

But he needs to know what happened to Yvette’s dad.

The problem is, he can’t ask him. Yvette will hear. She will think he’s crazy… again. She will be his ex-girlfriend… again. Raul needs to look to Oliver with eyes that are understanding… that are receptive. He does his best to show that he is listening. He nods slightly, as if to say, “Go on, you can tell me.”

Yvette looks confused, “Are you drunk? What are you nodding at?”

Raul releases a quick chuckle to hopefully quiet her, like he knows that he looks stupid. He redirects his eyes to Oliver, standing there, so plain for him to see. Yvette is oblivious.

“The spirits did it to me.” He points at Raul’s hand, clutching the empty glass.

Did he really drink himself to death?

The ghost in the derby hat reaches over, places his hand on Raul’s hand… and Raul feels five fingers, stinging cold to the touch.

The shock makes Raul jump! He stumbles backwards over the chair, plummets to the floor and smacks his head on the floorboards.

A ringing in his ears that never fades.

Soft white lights in his peripheral vision that never fade.

The cold fingers on his hand… the warmth of his own blood on the back of his head… and the spirits that did this to him, they never fade.

If you enjoyed this story and want to read more of my work, then please come check out my website stephenavitabilewriting.com where I post all my latest work, plus you can even subscribe for updates!

I'm a creative writer in the way that I write. I hold the pen in this unique and creative way you've never seen. The content which I write... well, it's still to be determined if that's any good.

More stories from Stephen Kramer Avitabile and writers in Horror and other communities.