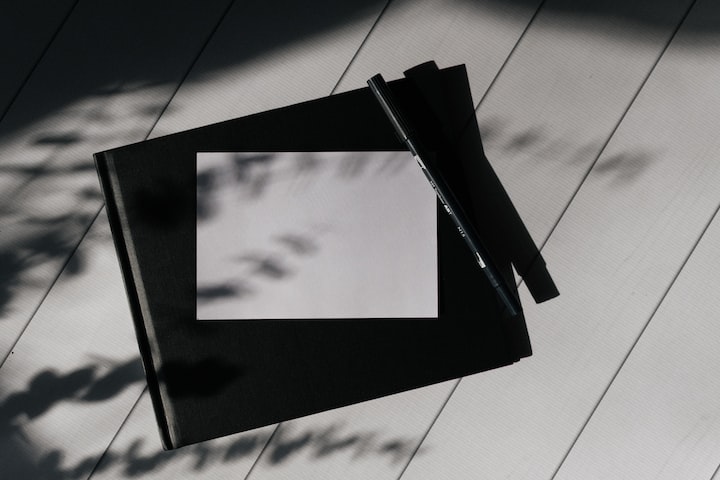 Jack could feel his lungs begin to burn and his calf muscles were already cramping. He had gone out last night and stayed out a little to late. He blamed the sexy blonde who had captured his attention. He was a young stockbroker and prided himself on appearances. He wore well-tailored suits and kept his physical appearance well-toned. He didn’t jog every morning for pleasure, but because it was a requirement of the image he wanted to maintain. The blonde had been a pleasant distraction last night, but he regretted it this morning.

As he jogged, he noticed a little black notebook lying on the jogging path. Usually he wouldn’t bother, but today he needed an excuse to stop for a minute. He picked it up and thumbed through the pages. It contained some foreign writing he didn’t recognize, but the front page had a name and address of the owner written in English. It also promised a reward if it was returned. Jack checked his watch, noticing the address was only a few blocks away. He figured he had ample time to return it and collect his reward before he had to leave for work. He reasoned that free money was a good excuse to stop his morning run.

The house he approached was a modest little cottage. The yard was well maintained and the door knocker looked out of place, on an otherwise charming little home. It was a gold snake that wrapped around itself, consuming its own tail. As he grabbed it to knock, he pulled his hand back quickly and noticed he had a tiny cut from a jagged piece of metal on it. The cut was small and had only produced a few drops of blood, so he avoided the knocker and balled his hand into a fist and knocked.

A tiny little man opened the door and looked up at Jack. He must have been well into his nineties and a cane was grasped in his right hand, helping him to stand. He looked at the little black book Jack held and his face lit up.

“You have found my book!” he exclaimed in delight and reached his left hand out for Jack to give it to him.

Jack smiled down at the little old man “I did, I hope it hasn’t been lost long.” He answered

“Where are my manners! Come in, please sit down while I get my checkbook. I believe you are due a reward.” The old man offered and began walking in the house expecting Jack to follow.

Jack decided he should politely decline the reward, before accepting it “That’s okay, no need to reward me for doing the right thing.” He called out as he stepped inside

“Nonsense! That notebook was given to me by my great grandfather. It is priceless to me and a good deed should always be rewarded.” The man insisted

Jack sat down in an old wooden chair that the man offered him and he waited patiently while the old man retrieved his checkbook. He was going to be really mad if the man gave him anything less than $50. He had after all interrupted his own routine to bring back this man’s worthless little notebook.

The little man returned quickly with a paper and a check. Jack’s eyes grew wide when he noticed the amount that had been written in it. The little man sat down across from Jack and laid the paper down on the table. It was in another language and looked like gibberish to Jack.

“If you will just sign here, I will give you your reward.” The little man said smiling

Jack sat back stunned, the check was for $20,000 and he was sure it couldn’t be for him. “I don’t understand, is that check meant for me?’ he asked

The little man smiled and nodded “I am a very simple man and have lived a frugal life. Truth be told I set the book out on the path last night. I have no children and money is useless to me now. I wanted it to go to someone who deserved it. Tell me Jack, are you a good man?” he asked

Jack didn’t hesitate to answer “Yes, of course I am.” The old man slapped his hand down on the table and exclaimed “Then you shall have my money! I simply need you to sign this paper, it is for tax purposes for my estate and the money is yours.”

Jack looked down at the paper he couldn’t decipher “I don’t know what it says though.” He confessed

“You must forgive me; I bank in Bulgaria and it is written in Bulgarian. It is simply a tax form for my bank, releasing the money to you.” The little man said and smiled

Jack celebrated his good fortune long into the night. He paid for dinner for his friends and bought rounds of drinks for everyone who was helping him celebrate. He had even found a brunette that caught his eye. He kept describing the creepy little man and how easily he had parted with his money. He even bragged that he might go see him next week and perhaps see if he could scam him out of more. He ended up taking the brunette home and didn’t close his eyes until close to dawn.

He woke up and his body felt terrible, he realized he must have over done it last night. He started to sit up and found his arms were weak and he had a hard time pulling himself up. He looked around the room and didn’t recognize where he was. He wondered if he had gone to the brunette’s house, but he usually took them to his house. It was more convenient when he wanted to kick them out so he could sleep. That’s when he noticed himself sitting in a chair across the room from him. He began to scream at the sight of himself.

He got up and walked to the bed and sat down on the edge of it, he smiled a gruesome smile at himself and said “Calm down Jack! You will give your new body a heart attack. You are no longer a young man, but instead are a frail little man.”

“What is happening?” Jack asked himself and looked down at his wrinkled, gnarled hands

“I have taken your body.” The man answered simply

“How is this possible?” Jack asked knowing he must be dreaming, caught in a nightmare

‘Long ago I was a priest in Samaria. I learned the secret to immortality and I have lived ever since. The spell is really quite simple. You must have a drop of blood. You must have the man sign an agreement to change bodies and he must be a bad man. I have all three with you Jack. You were so willing to take my money, you didn’t even question what you were signing. Last night I willed everything I own to you and I have all of your memories and thoughts now. I told everyone last night I would come see you next week. Sadly, I will discover your dead body, and a heartfelt note you wrote. You were so overwhelmed with my kindness that I left it all to you. Soon you will move away from this place and even sooner everyone you have ever known will forget you existed. I will live in this body until it grows old and then once again, I will find its replacement. Life is a circle Jack and it eats itself, unless you can find a way to escape it.” He explained and smiled down cruelly at his old body

“You can’t do this!” Jack screamed

He looked at himself confused “I already have Jack.” He said and then looked around the room at the treasures he had amassed in this lifetime “It’s funny what people collect in their lives. Once I owned an original Van Gogh, but in this lifetime, I preferred to collect Norman Rockwell. I wonder what I will collect in your body Jack? Perhaps, I will get married or maybe I will become a priest again. I never know what I will do when I change bodies.” Now he looked back at Jack and said “Do you know the one thing I can never figure out? No matter how many lifetimes I live?’ he asked

Jack looked up at him terrified and said “What?’

“I can never figure out the price of a man’s life. What makes one man more valuable than another? I have taken a body before by trading 5 shells. I have taken a body by trading cows and sheep. Today I took yours for $20,000 and when this body becomes old, I wonder what I will pay for a new one.” He said and sighed wearily “I suppose I will never know the answer to that question, but at least you know now. The price for your life was $20,000.” He said

Jack watched in horror as the old man pulled a pillow from behind his head. Ad the pillow was lowered over his face and his breathing became desperate and labored, he realized the man had been right. He had put a price on his own life.

More stories from Shawna McCord Bennett and writers in Horror and other communities.