A story that happened on a white bus

by Flagler Danzig 2 months ago in fiction
Report Story 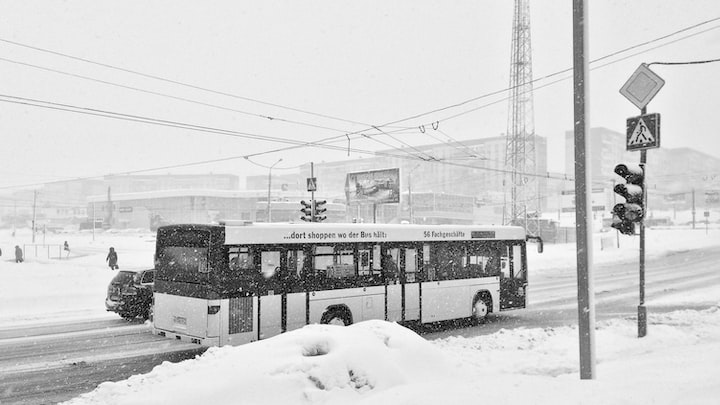 Photo by Eugene Prunk on Unsplash

The monitoring room is exceptionally quiet, several uniformed police officers are staring intently at the computer screen. Sometimes frowning and sometimes stony expressions, as if the picture is playing out what heart-stopping horror plot.

This is from the traffic command center just pulled out a surveillance video, the location is located in the city center of B special control area - City Trade Commercial Street intersection. Due to the dense population of vehicles here from the construction of the last few years, not a few traffic accidents, so it has become a well-known black spot path, that is, from time to time there are non-man-made but bizarre accidents that appear.

However, the case of the unmanned bus that occurred in the early hours of the night is very different from previous crashes and cuts. Not only is there not a passenger on board, but even the driver is also missing, the only proof that can be concluded that there were passengers on board, is left in the seats and luggage racks of large and small handbags and boxes...

Due to the recent pressure from above to publish the news was returned, so he has not collected any valuable new things for a long time, for which he also went out of his way to run outside for several days and finally made a major discovery.

A week ago B city just happened a strange traffic accident, the police have been involved in the investigation but never any results, in order not to cause public panic psychology of the case is kept secret. Fang Hua then got an idea from it and quickly took action, using his contacts at work to find the surveillance video of the intersection that night and found some clues.

So Fang Hua found an old employee, Lao Cao, at the gas station not far from the accident site. Fang Hua took the opportunity to invite him aside to talk, knowing the purpose of the visitor old Cao looked very impatient, frowned and waved his hand, and said.

"A few days ago, the police repeatedly came to ask questions, and now a reporter has come out, so I even work is affected, there is no one to manage ah? I said I just gave the bus to fill up the other nothing..."

Fang Hua saw the situation with a smile on his face his still closed face, lowered his voice, and then said.

"Master Cao, of course, I know your difficulties, I just want to know more about the bus case specifics ..." finished and took out an envelope from his pocket and stuffed it into Lao Cao's hand, after a pause and then asked: "To assist the police in their investigation is a good idea.

"To assist the police investigation is the obligation of every good citizen, but helping reporters to reveal some key information is not an obligation if my report can get the boss's appreciation that Master Cao also has half of the credit, right?"

Fang Hua was prepared for this, after so many years of being a journalist to deal with an ordinary citizen who did not want to give himself more trouble or hard to beat him. Besides, it has been a long time since the mega news was unearthed by him and will get the desired effect, now spitting some blood is also worth it.

Cao pressed the envelope into the jacket pocket of his overalls and suddenly covered his stomach, claiming that he had to go to a large number to get a colleague to replace him, so I followed him as if nothing had happened and went to the public toilet at the exit of the gas station.

Lao Cao looked around to make sure no one was there, touched out a cigarette to light up, and also gestured to me to have one, I know he was organizing his thoughts to tell me about it and took the cigarette in the crack of his finger. To his heart's content to smoke a few mouthfuls of smoke, a few moments later slowly opened his mouth.

"I advise you ah or do not play this idea, too fucking evil ..."

"If it weren't for the police finding me and asking me about it, I think I'd probably keep it in my stomach. I was on the night shift that day because nothing was coming over to refuel the car so I sat on the side and dozed off, almost noon when I was woken up by a blinding light, I think I'll just say I woke up like this because I didn't hear anything..."

"At that time I wondered if I was dreaming, except for the blinding light I could not see anyone in the car window, not even the driver down. So I walked over to get a better look, and just when I got to the front of the car and wanted to ask how much gas to add...guess what?"

Old Cao extinguished his cigarette, threw it at his feet, and stepped on it hard. Seeing my bewildered face, he continued.

"The window at the front of the car was suddenly pulled open and then stretched out a white frightening hand, holding a few hundred dollar bills, I know from experience how much fuel should be added to take the money to prepare for refueling. When I looked up again to see what was in the window but could not see anything, it seems that all the windows of the car were painted black like impermeable."

Fang Hua thought that this should be the old Cao who said the evil place it, and the two briefly said a few words and then dispersed. Seeing Cao walking away, Fang Hua raised the corners of his mouth and smiled as he took out the recorder from his satchel, pressed the button to put it back, and quickly left the gas station.

When he returned to the newspaper in the afternoon, Fang Hua jumped into the office and started tapping on the keyboard. He felt that he would write the best news ever this time, and the whole person was as busy as if he was possessed until the end of the evening.

At about ten o'clock, Fang Hua stretched long and was ready to leave work, only to find that his stomach has long been hungry and screaming. So I didn't even think about typing the last few words at the beginning of the manuscript, 0:15 white bus, and then simply packed up and ran out of the office to lock the door to leave work.

As the time is late around the building restaurants have been proofed, Fang Hua came to the commercial street near a restaurant to find a full stomach, and then look at the time has been 11:30. If the usual Fang Hua will certainly hurry to take a taxi home, but today always feel as if they still have something left to do, the ghosts again came to the gas station during the day.

Unlike the daytime, this place is quiet and weird and there is not a single person in sight. Fang Hua is still standing by the public toilet, does not know why he came and did not want to leave, and began to pass the time with a cigarette. Suddenly, looking at a bright light shining over, instantly in front of a white. Fang Hua subconsciously used his hand to block the light and still could not see what it was until his body began to walk uncontrollably toward the entrance of the gas station.

It was the sound of the car door opening, Fang Hua then reacted but already came to the bus located in front of the entrance. He jerked back a step, and stopped in front of himself in exactly the white bus seen in the surveillance video!

"There are still 5 minutes to drive ah, passengers who have not yet boarded the bus, please hurry, that young man will close the door if you do not get on board..."

Not waiting for Fang Hua to think about who squeezed him hard behind him, then another force pushed him into the car, followed by the sound of the car door closing. The whole process let Fang Hua too late to make any reaction, he looked around at every passenger in the car, but they are low heads as if sleeping for a long time stone statue motionless, not even noticing a breath.

The car is full of people, Fang Hua found the only empty seat and sat down. He stole a glance at the woman holding the child next to him holding what exactly Fang Hua did not know just look like. The woman's body leaned to the side, her head slightly hanging down her invisible face, more invisible should follow the breathing and regular swaying of the body.

Fang Hua swallowed hard and began to feel the infinite fear instantly. He couldn't even figure out if the car had started or not. So the trembling hand slowly reached out to the woman's face...