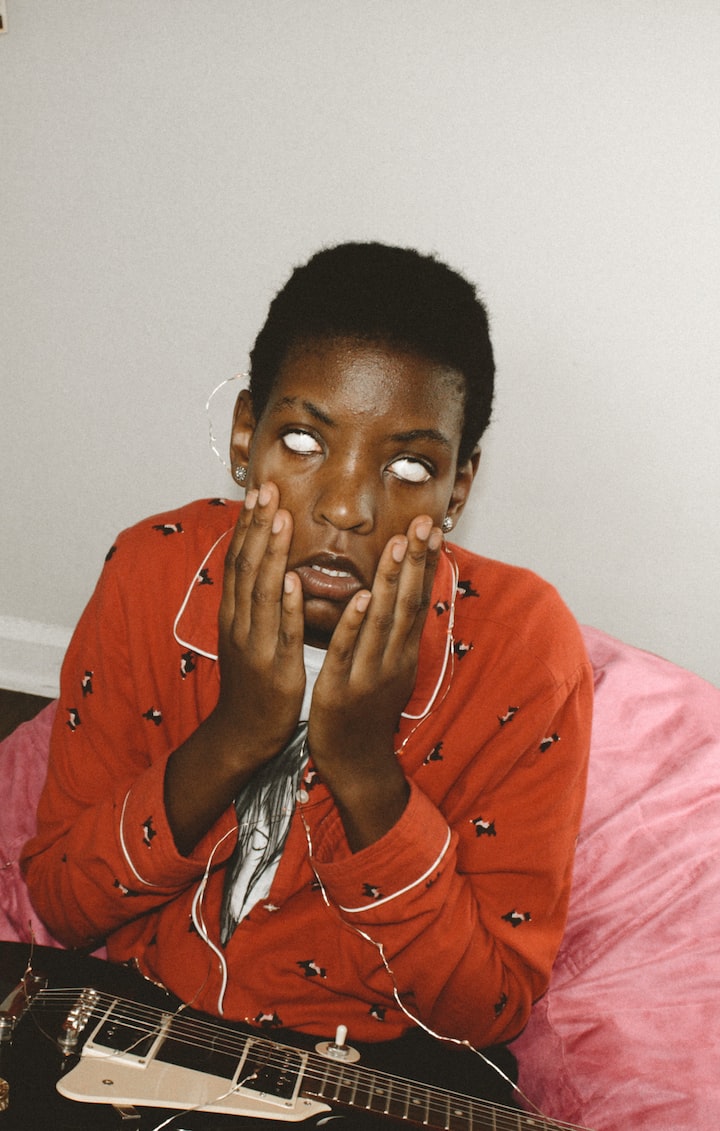 Xiao Xue always sleeps poorly these days, the morning after the skin actually had a lot of acne, at first did not care much, but after a while, Xiao Xue found that the skin acne is not only not good, but aggravated, to be able to live normally, Xiao Xue had to go to the hospital, a variety of tests were done, but the doctor's conclusion is nothing wrong, maybe skin allergies, hastily grabbed some medicine.

This evening, Xiao Xue as usual lying in a pile of snacks aimlessly in Taobao shopping, she usually has two hobby snacks, online shopping. In the eyes of his friends, she is an uncompromising foodie and shopaholic. Because of this, Snow made a lot of friends, but all have similar interests.

"Phew..., it's already eleven o'clock, how come there are so few new products on Taobao today! Wasting my precious time." She was about to turn off her computer.

At this time pajamas like a ghost floating into the eyes of Snow, that is a piece of very thin red silk made of short robe densely woven with silver stars, folded elegant ruffles, delicate lace, with a few attractive lipsticks, the whole pajamas all through the noble, elegant temperament. Snow has long been fascinated, and then look at the price, within the range of acceptance, plus the recent skin allergies, sleep at night can wear pajamas. So Xiaoxue did not hesitate to shoot down.

The pajamas arrived in less than two days, but strangely enough, there was also a letter attached, and the envelope looked like it had been soaked in bright red blood, and from time to time, it smelled like decay. Snow stared straight at the letter, her heart indescribably strange.

Just as she was about to open the envelope, a sharp knock on the door woke up the pensive Snow, she nervously hid the bright red letter in her hand under the sofa cushion, walked to the door, and fixed her mind, "Miss Snow, I forgot to tell you, the merchant asked me to make sure to convey to you when shipping the goods, make sure to look carefully at the attached letter when trying them on." Xiao Xue looked at the back of the mailman's departure and did not look back for a long time.

"It's just a pair of pajamas! No need to be so exaggerated!" Snow opened the box, inside are red pajamas and the picture is not very different, very thin white silk is made of a short robe, densely woven with silver stars, folded with elegant pleats, delicate lace, love it Snow can not wait to wear on their own.

"Phew..., it's already past ten in the evening." Xiao Xue couldn't wait to pull out that nightgown and put it on herself.

Immersed in excitement, she had long forgotten about the letter and the merchant's advice! The next morning, Xiaoxue was surprised to find that the acne on her body was much better, and her face was rosier than before.

This evening, due to the preparation for the exam, Xiaoxue studied until late to get home, and after arriving home and washing up, she went to bed early. In the latter part of the night, she was awakened by a noisy sound, like tearing something. Xiao Xue held the bed and fumbled for the switch in a daze. The switch was at the head of the bed and could be reached every time she reached for it. She touched a round sticky thing, and suddenly Snow's protruding eyeballs stared firmly ahead, her hand retracted like an electric shock. Because what she touched was not a switch but a still dripping blood - a dead man's head.

In the tragic white moonlight, a skinless, dark red muscle mixed with white connective tissue, embedded in the muscle of the blood vessels rhythmically beating, full of white teeth exposed, between the teeth from time to time there is a dark red mucus out, two eyeballs hanging on the bridge of the nose, is staring hard at Snow, constantly turning. That's right it was a dead man who had been skinned, lying on his back in an unbelievable position at the head of Xiaoyue's bed.

"Ah...! Ghost! Help!" She rushed out of the room desperately, "bang" on a person, she gasped, her fearful heart calmed a little because she smelled the familiar perfume, "Mom, there... there are ghosts, help me, so scary. " Snow helplessly hugged her mother, suddenly she froze because her mother's body was wet and sticky, and a strong smell of blood made Snow about to throw up.

"Hey..., you said ghosts look like this from time to time!" She hugged there or her mother, this is a lying corpse, covered with maggots back and forth, mucus is squeaking out from the rotting torso, the face is only a pile of rotten flesh, every word said mouth will spew out a bunch of maggots. Snow embraced this corpse, when her father came out in the kitchen, carrying a bloody half-arm in his hand, but it was a half-arm that had just been cut off his own body. He was also covered in skinlessness.

"Good girl, come to daddy, it's fresh, try it." Snow broke down completely, and she walked slowly toward them. That's when the red-skinned letter slid out from under the sofa cushions. Through the miserable white moonlight vaguely see a few lines of bright red words "Yin year, Yin month, Yin day born woman can not wear at midnight, or else the consequences are self-imposed." And Xiao Xue is a woman born in a cloudy year, a cloudy month, and a cloudy day.

It turns out that the pajama factory saved money to use the skin of the corpse shortly after burial as material, but soon the factory closed and overnight said employees were skinned to dry on the factory shed, like the dried frog meat, extremely horrible.

The next day the police found three highly decomposed bodies in Snow's house, and all had been skinned. The red pajamas were also missing.

"Buy a nightgown! This is the real leather pajamas yo! Hey hey hey!"