Egyptians Accomplished A Feat Almost 5,000 Years Ago Building The Great Pyramid At Giza That We Can't Recreate Today

by Jason Ray Morton 4 months ago in Historical

Did They Have Help From Some Advanced Civilization? 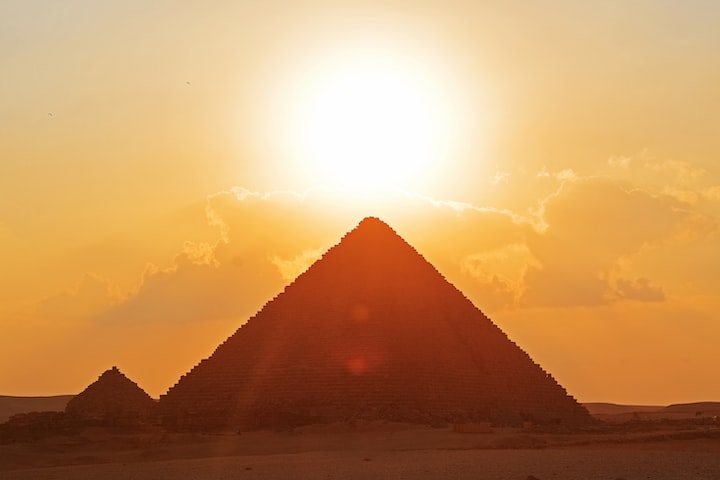 Some mysteries will plague humanity until the end of time as experts, scientists, and historians continue to hunt for the answers of what if, and how did this happen. One of those mysteries surrounds The Great Pyramid Of Giza, how it was built and was there an advanced civilization that aided the Egyptians.

We Can't Remake Something From 5,000 Years Ago

For centuries, the ancient pyramids of Giza, have been a source of amazement and spectacle for people around the world. At 455 feet tall, the Great Pyramid, thought to have been built by Pharaoh Kufu around the year 2550 BC, was once the largest structure on Earth.

Scientists over the years have studied the Great Pyramid and pondered what it must have taken at that time to construct such a wonder. Many believe that it took 20,000 workers 20 years to finish the Great Pyramid. This would be an astounding task when our history shows that they only used wooden implements with ropes and pulleys. Due to there being such detail and the precisions alignments of the pyramid, it’s hard to believe that such a magnificent structure could be completed in 20 years with so few people and such limited tools and the resources of that period.

Despite all the study and examination by scientists, exactly how the pyramid was built remains a mystery. With modern-day tools and know-how, scientists have not determined a way to recreate the pyramids, even on smaller scales, with the same precisions as those that built the originals. The technology to do so, in that era, simply didn’t exist according to historical teachings. It shouldn’t have been possible to construct the pyramids when they were built. Adding to the mystery of the Great Pyramid, it is the only one of the Seven Wonders Of The World to remain mostly intact.

The massive size of the pyramid alone creates a very convincing argument that there was some unknown technology used in the construction. The largest of the three pyramids, and the largest in the world, it consists of 2.3 million stone blocks, each weighing 2.3 to 15 tons. Archaeologists believe they were quarried from a nearby source. At such an incredible weight, the question of how human workers moved the blocks has been the subject of debate for generations.

The theory suggests that large groups of workers would have pushed the blocks over wooden ramps. This is hard to believe, as there is no known material, much less the wood believed to be used in the construction, that could have supported the weight of the massive stones. Doing the math for the timeframe of construction, it comes out to the workers setting a block every two and a half minutes. It seems an incredible feat, if not an impossible one.

As the studies of the Giza pyramids continue, discoveries are regularly made. The tunnels found below the pyramids allude to a truly advanced civilization. Carved from bedrock made of limestone, the labyrinth of tunnels protrude deep beneath the desert and have much left for scientists to discover. There are still new facts, and new chambers being discovered, that have remained unseen by man for thousands of years.

While going into the deeper mazes of the pyramids, there were 20 boxes discovered that were cut with precision from Aswan granite. Each of these mysterious boxes weighed in at 100 tons apiece. Experts in the fields studying the pyramids believed they were places to bury prized bulls. The only issue is there have been no bulls ever found. Others believed that they were the storage place of ancient forms of energy. That would make more sense than the boxes being for bull burials.

The materials in the construction, specifically the mortar, have been examined and although the composition of the mortar has been determined, our modern technology can’t recreate it. The mortar was made of processed gypsum, and it wasn’t used the same as the cement we use to make modern-day bricks.

Could hieroglyphs found within the Giza pyramids someday answer the question of how the people of the time built such a magnificent structure? Perhaps they could answer the question, why can’t we reconstruct one with the technological know-how we have today? When looking at the glyph above, what do you see?

Near the top and left of the center do you see the same thing many others believe?

The similarities between the image and modern machinery and aircraft are worth noting. And, while many choose to believe its’ all purely coincidental, it certainly would answer some of the questions about how was the pyramid constructed.

There are many mysteries that surround our world. We’ve only just begun to explore the deepest depths of our oceans and while preparations are being made to return man to the moon, and eventually to Mars, what about Earth? While the pyramids remain shrouded in mystery, there is still much about where man came from, events of the distant past that shaped us, and mysteries like the pyramid that warrant solving. When I look at the helicopter above, I see the similarities. When I look at the glyph, to me, it seems clear that the artist was carving shapes that history would have taught us the people of that time would have no frame of reference for. The tech wasn’t there in that era, or was it?

If you found that interesting, learned something, and would like to come share your stories with the world click here or below. As a Vocal plus member you'd have the opportunities to write for cash prizes as high as 20,000 dollars, tell the stories you have to tell and support other independent writers while developing your own income stream as well. Becoming a member costs us nothing extra and through the referral program the writer benefits a small amount off of their referrals.