When the Tide Meets the Sand

by Lee about a year ago in comedy
Report Story

A young affluent prince adjusts to life offline with his father. 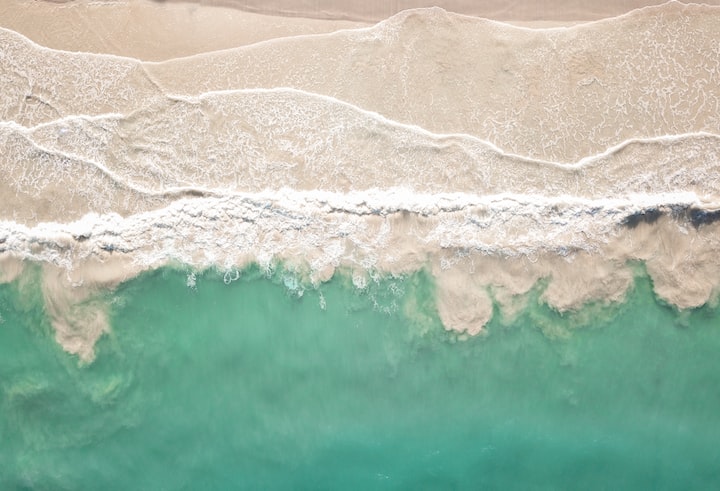 Photo by Michael Olsen on Unsplash

Although it had ceased to have any use for a month now, the glass pebble that once connected him to the world, his fans, and his girlfriends, still never left his pocket. 2072 was the year New Dubai crashed; financially and literally. If not for his father’s divergent nature, The Young Prince would have met his end along with the rest of the family when a freight drone the size of a stadium was sent through the spires of the ‘Sky Department’.

The Young Prince had been content living in the clouds before the internet dropped. He didn’t share his father’s love of deep-sea diving and meeting new people. His passions were poetry and skincare, which he practiced in solitude yet broadcasted daily from his estate of mirrored towers. These exercises in vanity, reflected online, were what brought him the most joy. It's no surprise then that two weeks offline were devastating. Neither The Prince nor the remaining population of the world ever would recover.

When the net came back online, not only was every account of any kind reduced to zero but so too was every single line of code. Power had returned to the essential hubs around the globe and the connection appeared to be intact, yet every last Bit of data was set to zero. It was as though the net had decided to simply say 'no' indefinitely.

Without trade, cities became barren. Before any nation-leaders with the sense to cooperate had the chance to formulate a plan, land was seized everywhere by military factions - local or international - and city-folks gone savage. People who had been living almost entirely online now wondered the countryside like the walking dead, though with less instinct.

The Prince’s father had lied to him the night before their escape. His father said that he was finally taking him to see one of The Prince’s poems engraved on the dessert floor, large enough to be seen from space, just as he’d asked. The Prince took some convincing as his father had shown such disapproval to the original request; his father had always hated the sprawling plain of signatures left by New Dubai’s now deceased elite. They were deep scars on the earth that required constant upkeep, which the owners had continued to pay for readily. Hundreds of tonnes of sand were moved every day so that those onboard a commercial space flight might see their hideous memento. When the people of Old Dubai died of thirst, maintenance came to a halt and the dessert erased their efforts within a week. Although it towered over the old city, the Sky Department offered no shade for those below.

‘Thanks, father. Seeing my poem written on the land will perhaps cheer me up,’ said the young prince in the private jet. ‘But did we have to fly in this contraption? It’s hardly ideal.’

‘Yes, my son! Yes! Every damn modern aircraft used AI pilots, and they’ve vanished along with the net.’ His father sighed.

‘Right. But why not a helicopter? We’ll pass over the poem too quickly in this thing.’

‘Listen, son, I have something for you.’ His father interrupted. He placed something into his son’s hand: a heart-shaped locket made of dull silver, as old as the vehicle they sat together in now it seemed. ‘It was your mother's' His father said with a solemn look on his face. The Young Prince opened it and saw a tiny, much younger image of his father looking up at him.

‘I'm surprised she put a picture of you in here.’

They both looked out the window in silence.

Just then Rami, the family's cook, butler, and now pilot, shouted back to them from the cabin. ‘We’ll arrive in about four hours and a half roughly - I think!’

‘Don’t be dramatic. And don’t worry either, okay? Everything's going to fine.’

‘I’m not worried, I'm just done. With the world, and you mostly’.

‘Again, don’t be dramatic. And ungrateful! I’ve just saved your life…eh…I mean, reputation. Imagine wanting to be like one of those conceited, capitalist fools with their names carved into the Earth. I thought you were an artist and a seer like me!’

‘First of all, you were never an artist nor could you ’see’ anything of worth. You failed at business and couldn’t be trusted with the family’s estate; then you abandoned reason altogether and started funding pseudoscience projects based on incredibly moronic predictions!'

‘And look who I've helped! South Korea successfully jettisoned themselves just in time before the United States and North Korea went at it. Now they’re on their way, the whole country! to become the new Philippines, or well, whatever they want to be! No one’s stopping them! And I played my part.’

‘Of course. And they’ll have internet as well I assume.’ The Young Prince remarked sardonically.

His father looked down, clearly disturbed, then faced the window and said quietly, more to himself than to his son. ’No…they won’t have internet’.

With no intention of trying to understand his father, The Prince shook his head, looked out the window also, and inwardly recited his poem that was meant for the sand.

The Prince couldn't decide what was part of their arrival in Russia was more unexpected: that they landed on an airfield atop a tall structure completely surrounded by water; the fact that his father was actually expected by these people; or, that he spoke perfect Russian with them. It was all too much. He seriously asked himself if he were dreaming or not, and checked twice; something he'd done too many times already this month.

Two intimidating Russian men in military attire were standing on the platform awaiting them to step down from the plane. One of them said loudly, ’Hello Doctor, it’s great to finally have you and your family here. Welcome to St. Petersburg.’

‘Thank you. This is...Err...really something.’ The Prince’s father shook their hands and looked around him. Standing on the runway, you had no idea quite where you were. You could see mountains on the horizon; but before them, countless things were protruding from the sea. The peaks of hills, now minuscule islands. The tops of tall buildings, now tiny platforms on the water.

‘It’s a pleasure to meet you, Prince.’ One of the Russians said, sincerely, in English to the boy, kneeling down to his level. ’The Doctor... forgive me...I mean your father, has told us all about you’.

Without responding to the man's greeting, the Prince spun round to face his father and nearly shouted. ‘Doctor?! The Doctor?! How have you managed to fool this nation as well father? Do they know you are incapable of using an abacus, never mind a microscope?’

His father just laughed and followed the Russians into the lift a few feet away from them, the only thing on the surface of the airfield besides lights and painted lines. The Prince considered running off the end of the runway but Rami was quick to guide him towards the lift.

‘Luckily it's quite spacious in here; this used to be offices.’ One of the two men said. The Prince deduced that a tall building had been converted into one lift that now served the airfield that was built around it. ‘Unfortunately’, said the man interrupting the Prince’s chain of thought, ‘the next lift going down at ground level is much smaller, and takes some time.’

The quieter of the two Russians now interjected in his own language; it was clear he had been wanting to say this from the beginning. ’Did you explain your prediction to your son Doctor? Your premonition? Does he know what has happened while you were in the air? Surely, he must be disturbed?’

‘Not yet, no’ The Young Prince’s father replied.

It was two weeks before the Prince left his quarters inside the base underneath the Baltic Sea. He and his father had exchanged heated and perhaps regrettable words. The Prince had accused his father outright of coordinating what happened to his palace in New Dubai; but although he couldn't work out how else he would have known, The Prince concluded that his father didn’t have the intelligence or hate required for such a thing. The Prince could however believe that his father might have only chosen to save his son, even if he had the means to do more.

The Young Prince was looking at the locket he was given on the jet, questioning all he knew about the man who had brought him here. The man who had saved his life so he could continue living in this half-submerged, starving, and rabid world that was foretold generations ago. Just then, the very same man knocked on the cabin door. He told the Prince to come to the control room, that he'd want to hear this.

A wide, half-a-meter-thick sheet of glass served as the backdrop to the meeting, through which you could peer into the pitch-black Baltic Sea. A crowd had assembled. The Prince’s father was up-front beside a Russian officer who stood a foot taller than him. His Father and the officer were beginning, in English, to give an important update.

‘Sources tell us that the collision with the “Sky Department” was one of many impacts that occurred almost simultaneously in nearly all of the remaining nations with power. We remain untouched, although we are beneath the sea.’ The Russian officer stated. ‘But we know very little, as is to be expected these days without an online connection and allies.’ He paused. ‘We do have one discovery that we would like to share, however. One we believe that is ours alone, thanks to the Doctor.’

Every time he heard someone call his father “The Doctor”, The Prince winced with embarrassment and utter confusion.

'Thank you,’ The Prince’s father began, ‘we witnessed the net die over a month ago, and then beheld its anticlimactic resurrection two weeks later. Since then I’ve found evidence that it is still operating; and that what appears to be inactivity is more like a refusal to cooperate.’

This personification of the internet was not unfamiliar language to The Prince; he had heard his father take this stance before when he warned him about the amount of time he spent inside of it. In his mind, however, The Prince knew more about the net than any adult he had known, especially his father.

‘I’ve been looking at the Internet with a system much like an oscilloscope, or a cardiac monitor, and I've been recording the signal ever since it came back online. When analyzed, very closely, we can see that there is in fact activity, albeit for milliseconds at a time. And this afternoon, I recorded activity that coincides with the incidents.’

The Prince knew already where his father was going with this and yet doubted that anyone else in the room did too. He knew that his father would bypass the thought process of a rational man and jump to the conclusion that the net was acting of its own accord, and not under the control of a real person somewhere in the real world. His head ached more and more every time the concept of his father as a useless man was challenged. He believed this dissonance inside his mind was more than even the Earth had to bear.