by Reid Moore 2 years ago in space

An amateur astronomer claims to have photographed a Black Triangle UFO flying above the surface of the Moon.

A UFO sighting on the Moon is making the rounds in Europe with photos taken by an amateur astronomer showing what looks like a black triangle spacecraft hovering above the surface of the Moon.

The photos, taken by an as yet unidentified Earth-bound lunar watcher with a high powered telescope, appear to show a gigantic, black, triangular shape visible against the backdrop of the Moon's rocky surface.

In a subsequent photo, taken a short time later and from the same angle, it seems the triangle shape has moved.

UFO watchers are speculating the unidentified flying object was hovering above the hilly lunarscape and could be evidence of an airbase on the Moon.

Skeptics argue it's merely a shadow cast by a craggy formation on the surface, but can't explain why that shadow has moved in the subsequent photograph.

Others argue it's just an anomaly on the lens of the photo-telescope, but, again, there's no explanation for why the triangular object appears to be moving across the desolate lunar landscape.

Of course, photos and videos of mysterious objects either flying across the lunar surface or even launching into space around the Moon are nothing new.

Most recently comes a video purporting to show a saucer-like UFO blasting off from the Moon and flying at an incredible speed into lunar orbit.

While UFO sightings have been viewed with increasing skepticism in recent years, the pendulum seems to be swinging back with a new generation of skywatchers who are open to debate and show a willingness to believe in something which so-called scholars and experts may openly scoff at.

And, with the recent successful flights of the Chang'e lunar orbiters and landers launched by the Chinese government, renewed interest about the Moon is producing lots of new lunar UFO sightings and reviving the age-old debate.

Even NASA is getting in on the action, going so far as to crash-land the LADEE spacecraft on the far side of the Moon in 2014.

The results are technologically cutting-edge images from the "dark side" of the Moon, fertile ground from which many lunar UFO base and alien watcher theories spring.

In fact, one intriguing photo shows the LADEE orbiter flying above the Moon's surface before the intentional crash landing.

In it, the spacecraft is barely visible, leading to speculation that the black triangular UFO in the most recent photos must be of gigantic proportions.

NASA Snaps Photo of LADEE Spacecraft Orbiting Above the Moon 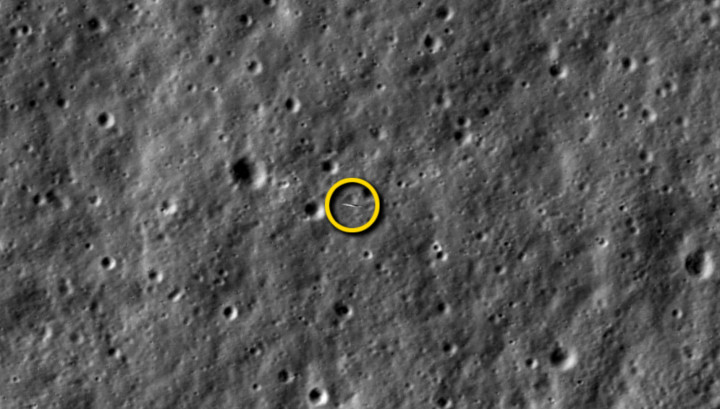 Since the dawn of civilization, humans have been skywatching and thousands of stories abound about alien observers using the Moon as a base to monitor and, possibly, influence our society.

What sets this UFO sighting apart is the shape of the object.

Most recent UFO sightings around our own planet seem to lean heavily on the theory that black triangle UFOs are possibly the product of our own futuristic aircraft design capabilities.

Or, that they are the result of our being watched by alien entities flying around the Earth and guided by a far superior race of beings capable of defying gravity in highly advanced, triangular ships with phenomenal aerodynamic properties.

In 2020, the Chinese government plans to land an orbiter on the Moon which will be able to scoop up rock samples and send them back to Earth for examination and comprehensive study.

By then, technological advances in telemetry and imaging will have increased even further, so it's not beyond the realm of possibility that evidence of alien intelligence exists, and will be discovered, on the Moon.

For true believers, it's already a foregone conclusion.

But, for the skeptical, the mission may prove to reveal what many have long suspected:

It's also a brilliant documentary...

I am a Freelance Writer living in Riverside California who writes on a wide variety of topics including News, Politics, Popular Culture, Science, Music, Poetry and Art.

See all posts by Reid Moore →