Leave The "Old Boba Fett" In The Great Pit of Carkoon

by Danny Fantom 2 months ago in star wars
Report Story

Stars above just let that man be kind and wise, please! 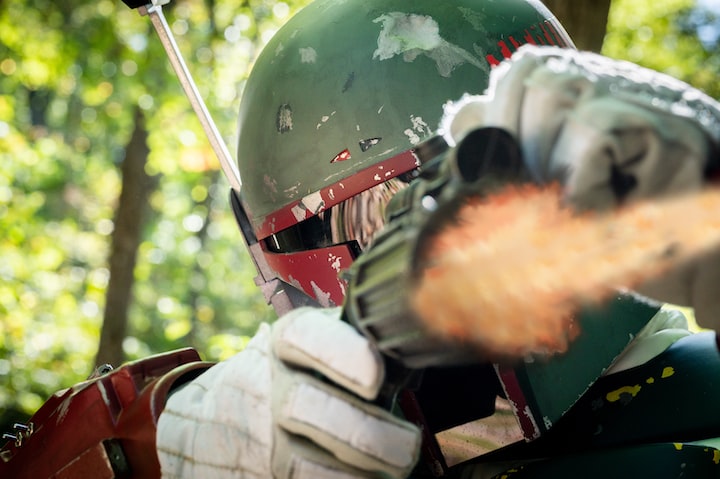 Photo by Bryan Huff on Unsplash

Jesus Christ I can't tell you how annoyed I am at having scrolled the third iteration of "Bring Back the old Boba Fett" article that popped up around last week. And it's really disappointing to me that Temuera Morrison is seemingly in agreement and wanting to "bring back" a more brutal Boba Fett. So I'm here to argue for the graceful, wistful aging of hotheaded youngbloods into thoughtful, mature old men.

Boba Fett was brutal for all of three minutes in season two of The Mandalorian. If we go back to his original appearances in The Empire Strikes Back and Return of the Jedi he was . . . cautious, patient, and in the end was super unprepared to face the jedi knight Luke Skywalker and the outrageously lucky Han Solo. Not a bit of those scenes had him acting like the toughest man in the room, or some aggressive rogue looking for a fight. He was confident, brokered no bullshit from Darth Vader, and never just jumped into action without some forethought. Despite that he still took some hits from Luke, because Boba Fett was of course a bad guy that the good guys would always overcome, and in the end he was jettisoned into the sarlacc pit . . . by accident sort of? Like Han did not thrust a spear into Boba's jet pack with a roar of manliness and victory. Han Solo literally yelped "Boba Fett? Where?!", flailed, and his improvised weapon literally just jammed Boba up and inadvertently sent him to his "death."

Nothing particularly badass about that my dudes.

So where the hell is this "old ways" argument coming from? The three minutes? Three minutes where Boba Fett wielded a weapon we'd never seen before and he bashed Stormtroopers heads in? Uh, that was literally the only weapon he had, and the M.O. of most Star Wards heroes is indeed to kill their enemies. If Boba had been using a blaster I don't think we'd be seeing arguments of "badass ways" because blaster shots just aren't as close up nor, I'll admit, as cool looking as mauling via gaffi stick. He learned those brutal moves from The Tuskans! They're the ones who are brutal and badass, Boba Fett has always been an efficient and no frills hunter. Now if you want to start throwing in his comic book run then, sure, you can begin a more evidence-based argument as to Boba Fett's ruthless ways and violence. And in spite of any smug retorts featuring such and such issue where Boba Fett was the epitome of testosterone to you, I'd still like to offer my rebuttal:

Characters Should Grow And Change

Let's continue that "badass" argument right? Oh, Boba Fett was a hard edged dude. He was a gun slingin', missile wieldin', raspy voiced bastard of a killer, colder than the pitiless expanse of space. Right?

Well that Salty Spitoon hall of famer took a hell of a tumble into the stomach of a monstrosity. Alright? He was as good as dead, doomed to years of unfettered agony slowly dissolving in the stomach of the sarlacc until death finally showed mercy upon his flea bitten soul. But that was gonna take a while- years as I previously mentioned- so I think its a fair assumption to say that Boba Fett was probably thinking about how he got there, in the few moments where his mind, fuzzy with pain and terror, cleared long enough for some lucid function. It's only natural, right, that we regret things when a situation has gone south. And when Boba Fett awoke after saving himself, burned skin getting an extra sear from the twin suns of Tattooine, sans family armor, and the prisoner of Tuskens . . . perhaps Boba Fett had some bloodthirsty thoughts. Maybe he thought about killing the Tuskens for the way they treated them. But, I think he spent a hell of a lot more time cursing the events that got him to rock bottom in the first place.

I bet he thought about all the choices, the situations, the hatred inside that pushed him down the path of self-destruction. He thought about that hatred born in him at such a young age that warped his thoughts, his feelings, and had him working with the Empire that was born from the blood of his father, and his people, so to speak. Maybe he thought about that young Boba Fett who accrued scratches and dents in the armor of his father, the one who did whatever was necessary to survive. Maybe he pitied that young fool.

Boba Fett grew from his mistakes, his shortsighted methodology, and started to think about the future. The life he'd been living before had only led him to ruin and, were he not so accomplished a warrior, a painfully torturous death. Why then would he attempt to repeat that? Why would he look at a life of bullheaded aggression and callousness and think, "It'll work this time"?

The Book of Boba Fett was all about Boba Fett learning how to balance his rabid past self with his older, more tired current self to create a sustainable future for himself and the ones he'd come to care for. He was broken down and cast from the pedestal he'd climbed on top of with his choice to work for the ruthless Empire, and then he'd been reforged in the eroding waves of the Dune Sea. He learned how to work with others, consider other opinions, and to achieve something that was not solely for his own benefit.

Like . . . is it really so bad? To see an older man eschew needless violence and cocksure posturing for thoughtful words and thorough action? It's not as if Boba Fett didn't do his fair share of ass kicking in the show- The Nikto Speed Bikers at that bar, the Assassins of the Night Wind, and Cad Bane were some excellent fights. Are people upset that he didn't just wipe the floor with them in two seconds flat like some kind of Gary Sue? I'm just not understanding everybody crying about how "soft" he supposedly was in his show. Was he supposed to solve every single problem with fists and grunting, hoarse epithets spat at his opponents or something because I'm just not seeing the problem here. Is talking through issues with contemporaries, learning how to care for others beside yourself, and learning how to be approachable, even gentle, what y'all are calling "soft" now? I just have so many questions . . .

"I intend to rule with respect." That's what Boba said to Fennec Shand as they walked from Garsa's Sanctuary. Part of ruling with respect is not acting like a senseless fool slinging missiles and fists everywhere you encounter resistance. Boba Fett doesn't just go in guns blazing because the consequences of his actions don't just affect him anymore, it affects his Gotra and Tatooine. Boba Fett doesn't play at being a vicious hunter because he's so much more than that now. He doesn't need to prove anything to anyone because- because-!

He is That Bitch!

Confident, mature, and really tired of these games! Listen if there's one thing Star Wars does extremely well, it's give us great, mature, fully grown up characters that still understand a need for growth while using the wisdom accrued through their decades. So many times a show focuses on the "next generation" or some snot-nosed teenagers who are supposed to take over the tired and failed adults with their enthusiasm and youth. But Star Wars always gives us quality, emotionally complex adults who are incredibly competent and I fucking love it.

And that? Is Boba Fett. A strong, competent adult who has little need for posturing and prancing around waving a blaster like he's got so much to prove to somebody. Boba Fett doesn't have to prove a damn thing to NOBODY. He is a legend. He is a Daimyo. And he is a badass.

So that younger, impetuous, "my dumbass decisions got me stuck in a sarlacc" Boba Fett can stay gone. Please.

Hi I'm Danny! I write about Halloween, music, movies, and more! You can chat with me or follow me at Twitter: Danny Fantom @ThrillandFear

More stories from Danny Fantom and writers in Futurism and other communities.