by Danny Fleming 2 years ago in space

The planet Mars has been an object of interest to many for many years. There have been many science fiction books about traveling to Mars.

Several books have been written about "Martians" that are extraterrestrial beings from Mars that visit the Earth. They are usually red and often have tentacles at the top of their head. H.G. Wells wrote an excellent book titled War of The Worlds that is about Martians that travel to the Earth in small capsules that have ray guns. The Martians try to destroy the planet using their ray guns. There is a very good movie that closely follows the book with the same title starring Gene Barry.

Mariner 4was launched on November 28, 1964. It made the first successful flyby of the planet Mars and took the first closeup pictures of Mars. Since the Earth and Mars are dark objects because the distance Mariner 4 will be from the Sun when it approaches will be millions of miles from the Sun, the star Canopus was used. Mariner 4 had difficulties finding Canopus because its star tracker could only find objects from one-eighth to eight times its brightness. 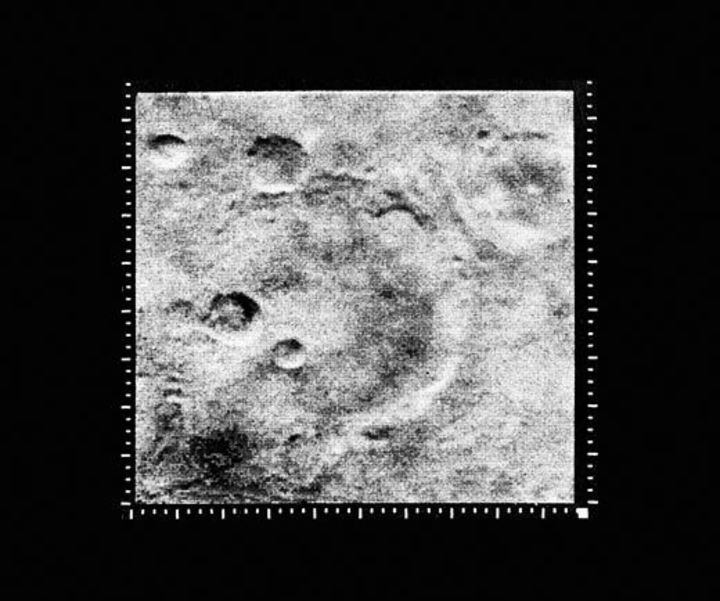 One of the first closeup pictures of Mars.

Viking 1 and Viking 2 landed on Mars more than 40 years ago. It sent back pictures of the planet, but while testing the soil of Mars it might have found evidence of organic matter. However, the evidence was accidentally destroyed a few seconds after its discovery. NASA is sending a rover in 2020 to test the soil on Mars for organic matter.

NASA expects to be able to visit an asteroid in the year 2025 and send a human to Mars in the year 2030. A lot has been learned about living in outer space from the astronauts on the International Space Station.

Spirit was launched by a DeltaII rocket on June 10, 2003 and landed on Mars on January 4, 2004. It was a rover designed to examine any minerals, rocks, and soil in the vicinity of its landing site. The names of Colorado peaks over 14,000 feet were used to name some of the rocks examined. In June 2007, a Martian wind blew dust off of Spirit's solar

panels, increasing its power by 120 watt hours. However, Martian winds a few days later threatened the existence of both Spirit and Opportunity.

It was also capable of analyzing any soil or rock that might have evidence of ever having any water. Water is one of the requirements for life to exist on a planet. It did not, however, have the capability of determining if it had come across any life forms in its path. A small whirlwind was photographed by Spirit while it was moving across the surface of Mars several feet away from it 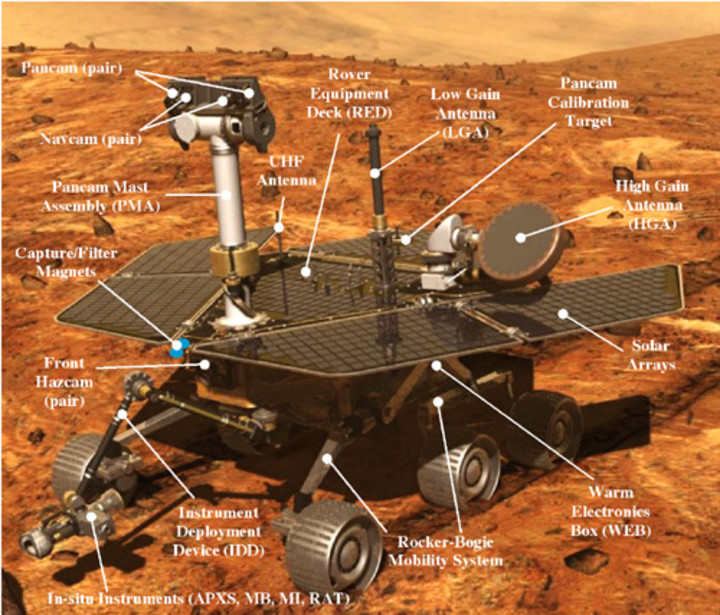 The artificial satellite Opportunity was launched for Mars on July 7, 2003. It arrived on Mars three weeks after Spirit landed on Mars. Opportunity went into hibernation on June 10, 2018 probably because of a global dust storm on Mars. Global dust storms only happen about every six to eight Earth years. Sunlight and its visibility have been reduced at its location in Gale Crater.

However, NASA's Curiosity rover is studying the soil on Mars at Gale Crater without interruption due to the global dust storm. This is because while Opportunity is powered by sunlight, Curiosity runs on nuclear power 24 hours a day.

Curiosity is part of NASA's Mars Science Laboratory Mission. Its main objective is to determine if Mars could ever have had the very small life form microbes exist. Its tests on rocks and soil have found evidence that microbes could have existed on Mars in the past. 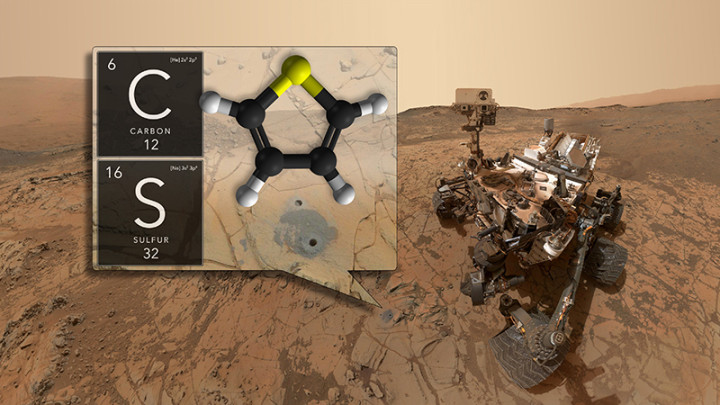 There are four goals for the Mars Exploration Program. Goal one is to determine if life ever existed, or does exist on the planet Mars now. The Curiosity rover has found evidence of organic molecules that might or might not mean life existed or exists on Mars now. The existence of water is another condition necessary for life to exist on Mars. It is known that water ice is present on the poles of Mars.

Carbon (or silicon) is also known to be a necessity for life to exist. The organic molecules found by Curiosity contain carbon. There is also carbon dioxide (CO2) in much of the atmosphere of Mars. Carbon dioxide contains oxygen, which is also necessary for the existence of life.

Goal two of the program is to study the climate of Mars. It will study the polar regions to determine how it formed many years ago. Goal three is to study the geology of Mars. The Mars Global Surveyor spacecraft found magnetic materials on Mars, which is evidence of a magnetic field. A magnetic field would have protected the planet from cosmic rays that are a hazard to the existence of life.

Goal four is to prepare for future human exploration of Mars. The Mars Exploration Program and the private firm SpaceX are making plans to send land a human on Mars within the next ten years.

President of the United States Donald Trump told NASA to redirect its space exploration to include the Moon in his space policy directive:

"The NASA Administrator shall, 'Lead an innovative and sustainable program of exploration with commercial and international partners to enable human expansion across the solar system and to bring back to Earth new knowledge and opportunities. Beginning with missions beyond low-Earth orbit, the United States will lead the return of humans to the Moon for long-term exploration and utilization, followed by human missions to Mars and other destinations.'”

NASA is planning to use a manned spacecraft that will orbit the Moon. It will be used for exploration of the Moon and as an aid to astronauts who are on a mission to Mars.

Another mission of the Mars Exploration Program has planned a launch of an unmanned rover to Mars in the summer of 2020. It should land on Mars in February 2021. It will take samples of soil and test them for any signs that Mars could have had the conditions for life to exist on the planet. A future mission might return the samples to Earth.

The rover will try to find a way to produce oxygen from Mars' atmosphere, try to find subsurface water, and study the environmental conditions on Mars. This information will be used for the first manned flights to Mars.

NASA is thinking about using balloons to study the surface of Mars. Helium balloons are being developed for the Ultra Long Duration Balloon. It could last as long as one year. Balloons can get much closer to the surface of Mars than orbiters and travel much faster than rovers. 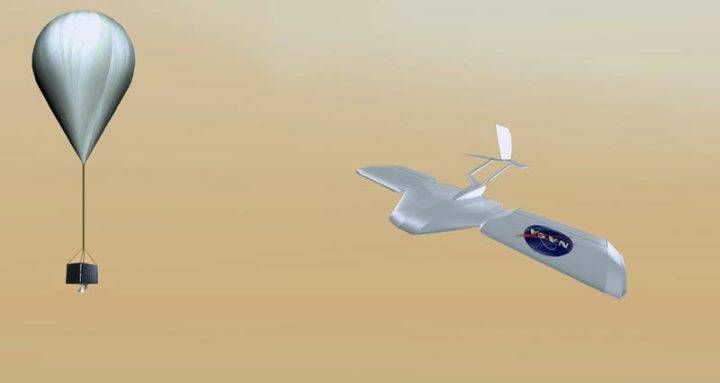 Balloons would be faster than rovers

A Montgolfiere balloon (named after the French brothers who flew the first hot air balloon) would not have to be inflated on Earth, but would use the atmosphere of Mars to inflate it.

There has been a campaign to put a man on Mars led by SpaceX's Elon Musk the past few years. He thinks we have to colonize on another planet because Earth will be so crowded in several years that it will cause extinction of Man. The best time for a launch happens every 26 months when Earth and Mars are aligned.

SpaceX will send a satellite rover designed to test how heavy spacecraft will operate on Mars called Red Dragon in 2020. It was originally planned to be launched this year (2018), but other projects like their crew program and Falcon Heavy have been given top priority.

The first cargo mission is planned to be sent to Mars in 2022. It will confirm water resources and identify any risks involved in setting up a base where humans can live on Mars. The second mission will be in 2024 and will include cargo and crew. It will build a propellant depot and preparing for more crew flights.

SpaceX finished designs for a spacecraft that can get a human from the Earth to Mars. It was named BFR. It will replace Falcon 9, Falcon Heavy, and Dragon. Resources can be redirected from these three systems to BFR to cut down costs. BFR has a larger payload than Saturn V and will be fully reusable. 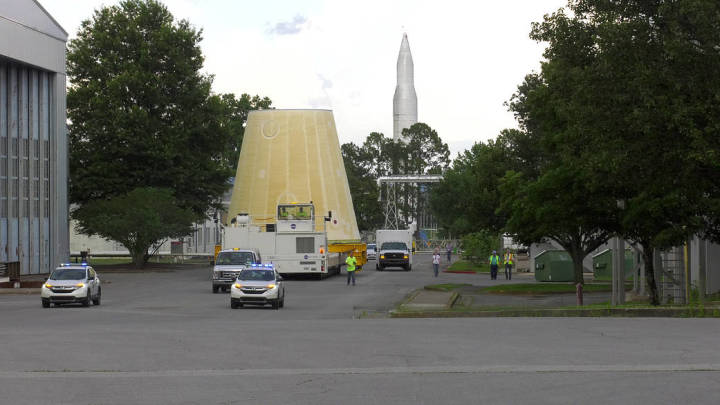 I received a Bachelor of Science in Mathematics in 1996. I have written several sonnets. I also wrote How to Prove The Collatz Conjecture and Many Articles on Many Subjects.

See all posts by Danny Fleming →