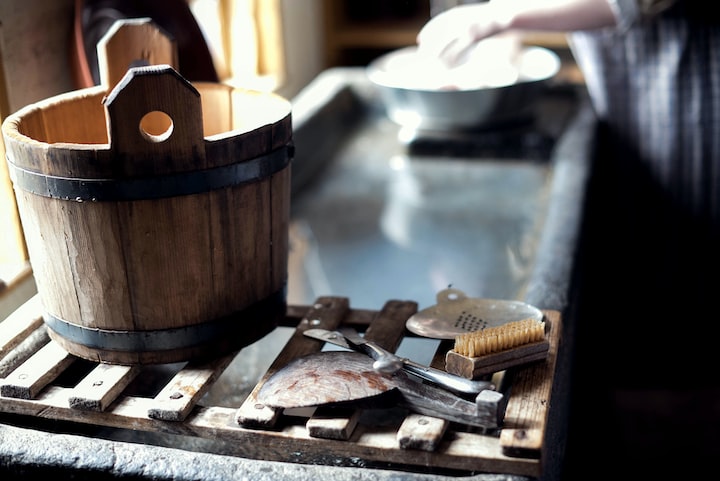 Photo by Jennifer Burk on Unsplash

To all intents and purposes he had. During breakfast, which the group took at a communal table, Hal had sketched in for Freddy the commune's ideals. He had leaned forward earnestly across his plate. “What we stand for here, Freddy, is Universal Love. We strive for unity with the Cosmos. We love everyone and everything, Freddy. Petal, here, she loves me; she loves Zip, over there; Zip, he loves Sheila; Sheila loves me. Me, Freddy? Me? I love …you. He placed a hand over Freddy's arm and shook it gently.

A phrase sprang immediately to Freddy's mind as he automatically clenched his buttocks with a look of alarm.

“No Freddy, you mistake me. Not in a physical sense. None of us love in a physical sense. Physical love is abhorrent; sexual congress a blasphemy.” His voice took on a manic quality. “Desire is to be purged! Purge the body. Exhaust it of all carnal feeling. Drain the rising sap. Rigorous exercise, cold baths and contemplation keep the body clean, the mind healthy. False modesty inflames lust. Hide not the body but reveal the spirit for all to share.”

Hal's words were having a curious effect on the rest of the group who took on glassy-eyed expressions. Hal continued, his voice rising to a new crescendo of mania. “Celibacy is divine. The purest love of all is spiritual. I sense your spirit reaching out for love, Freddy. I want to touch it. Peta1 wants to touch it. We all want to touch your spirit, Freddy.”

The pseudo-religious clap-trap that Hal was spouting mesmerised the group and all reached out with beseeching arms, taking up a ragged chant of “Touch me, touch me, touch me.” In Freddy's opinion, Petal's gaping robe revealed a somewhat more inviting prospect altogether than the daunting philosophical picture that Hal had just painted. He tore his eyes away from the tantalising vision and turned his attention again to the Leader. Hal was now on his feet, advancing on Freddy with outstretched arms and a visionary light in his eyes, closely followed by the remainder of the band. Freddy sprang to his feet in alarm - and caught his head a resounding 'crack' on a low beam. The room exploded in a red mist of cant and babel and Freddy collapsed like a felled bull amongst the bacon rinds and porridge.

When he awoke it was Freddy's body that occupied the bed, but it was certainly not Freddy who occupied the heavily bandaged head throbbing on the crisply laundered pillow. In fact, Freddy didn't know exactly who it was who lay there, wherever there was, or whether there was even a there to be at. He/it stared with glazed and slightly crossed eyes through the unfamiliar window, trying to make sense of the woolly clouds that sailed by high in the sky, and drifting in and out of consciousness dreaming, for some reason, of Chinese ladies, dancing naked on a tractor while large men with moustaches tried to hit them over the head with machetes. He plunged finally into a deep well of unconsciousness, from which he emerged three days later, mercifully with no headache, but also with no sense of lost time - and no identity

Another zombie answered Slipper's knock. He was used to seeing the effects of the previous night's excesses on Harris's face, but the picture he presented that morning surprised even Slipper, as Harris opened the door to him. It put him very much in mind of the late Lord Pemberton Horrocks' expression when found sprawled lifeless at the bottom of the staircase. Whatever it was that was ailing the lad, Slipper hoped it wasn't catching.

However, Harris was made of sterner stuff than his appearance suggested. In Carmen's words, he was ‘built like a bull’ and, although (in her uncharitable view) he might ‘keep his brains in his bollocks,’ his present lethargy was nothing that a good strong cup of coffee and the prospect of some extra cash wouldn't put right. He soon perked up when Slipper offered him a weekend's overtime, shifting furniture over to the North Wing. Slipper himself, he explained, had urgent business away from the Hall, which made it impossible for him to attend to the matter personally. It grated on him to go cap-in-hand to Harris in this way, but the lad had a strong back and it gave Slipper the opportunity to put his plans into first gear.

He was a frugal man and had little in the way of possessions. His books and Melsham family records were about the only things approaching relaxation he allowed himself, and he had seen these safely packed away in a crate the previous night. He was very proud of the family history he had painstakingly compiled over the years. Apart from an irritating gap round about Cromwell's time (when the then Earl of Melsham had conveniently avoided espousing either side by disappearing with the family silver) and a confusing period during the Restoration when any number of Pretenders to the seat of Melsham had surfaced claiming to be the rightful heir, the records were fairly complete. Packed away in a crate, even Harris could be trusted not to misplace them. With the North Wing only a 100 yards level distance from the Gate House, the lad should be well capable of shifting Slipper's belongings by the due deadline, he reasoned, leaving the entire weekend in which to further the scheme now fermenting in his furtive mind.

To catch a rat - and what expression more appropriate in Melsham's case - first lay a trap. Slipper was not used to thinking in metaphors, and the precise figure of speech escaped him, but if ever a rat were trapped, then Melsham's downfall was going to be the mother and father of all such analogies. Slipper's discussion with an indignant Doris the previous night had been enlightening. “I can't do me parlours wivout bendin' down, Mr. Slipper” she had complained. “I dares'nt turn me back in case 'e 'as me drawers down. 'Ow'm I goin' to do me parlours wiv me knickers round me knees, Mr. Slipper?”

Slipper considered the possibility of Doris polishing the floors drawer-less with her accustomed vigour, and rejected it hurriedly. “Yes, I can see that would be an encumbrance, Doris. I shall speak to his Lordship about it.”

“You can speak all you like,” retorted Doris “but not on my account, 'cause I won't be 'ere. I'm packin' me bags and goin', I am. Dirty old man. Should be locked up, 'e should. Lock 'im up and throw the key away, I say” With that Doris had torn off her apron and thrown it on the table. “As good as threatened me wiv' the sack, 'e did, if I said any thin'. Well, 'e won't 'ave the satisfaction. Not as I suppose 'e ever did, dirty old sod! I'm 'andin' in me notice, Mr. Slipper, an' I 'opes you can find someone as can put up with 'is lecherous ways, that's all!”

Seeing that Doris' mind was made up, Slipper could do little to dissuade her and, with regret, watched her leave the kitchen. She had been a conscientious worker. Then, something that she had said niggled away at the back of his mind, until with evil clarity, he had seen a way to show Melsham that Reginald Slipper was not a man to be trifled with. Fat Lil would be surprised to see him in the morning, it being neither a Bank Holiday nor his birthday, but the trip this time would be purely business.

While Slipper made his way to Rossiter, Melsham spent his morning on the telephone, pulling strings, calling in old debts, administering pressure in appropriate quarters, transferring the odd illicit sum to numbered bank accounts: in short, doing what his devious mind did best to ensure that his new project sailed through the bureaucratic system with the minimum inconvenience. By lunchtime, a foundering planning permission had been assured success, a restaurant licence was a forgone conclusion …and the Chairman of the local Licensing Justices was reflecting glumly on the fact that Melsham was in possession of certain irrefutable and nauseating evidence about himself and the Chief Constable of a Shire County that he would much rather no-one else knew about.

He sat back in his chair, well satisfied with the morning's work. One of the privileges of money was the power that went with it, and Melsham had inside information on enough men of substance in the Establishment to set up his own Government Department. A final 'phone call to his builder to kick arse and confirm arrangements for the inspection on Monday morning, and Melsham was ready for a little light entertainment. He went in search of Doris.

All he found was Doris' apron left where she had thrown it on the kitchen table the night before. She had been up at first light and gone before the larks. None of the other females on the staff were to his taste and, although the cook was the right build, the might with which she wielded a meat cleaver gave even Melsham pause for thought. Disappointed, he trailed off back to the family quarters., his earlier mood of smug satisfaction turning minute by minute into one of frustrated irascibility. Finally, he could stand the cloying peace and quiet of the Hall no longer and, flinging himself into his Rover, roared out of the courtyard, sending Harris scampering for his life under the full weight of Slipper's iron bed-stead. It was about time, Melsham thought, that he found himself the bright lights of Rossiter, such as were to be found of a Saturday lunchtime.

Carmen had finally stirred from the Stable floor during the early hours of that Saturday morning, disappointed to find that Harris was no longer there. Slipper had, by then, locked up, but this was no great hardship to a dishevelled Carmen. Clandestine exits from bedroom windows were her stock-in-trade, and the process could just as easily be reversed. Luckily, a wisteria twisted its way up the walls below her bedroom window, which was always kept open for just such an occasion. After a strenuous few minutes, during which the remaining buttons on her clothing were lost to the wisteria's clinging branches, she had scrambled through the bedroom window and collapsed onto her bed.

Her father's hurried exit from the courtyard woke her. A glance through the window saw Harris just picking himself up from the ground from beneath a scattered bedstead. A quick shower and change of clothes later, and Carmen put him to the floor again in Slipper's new quarters.

Quirky humur underlines a lot of what I write, whether that be science fiction/fantasy or life observation. Pratchett and Douglas Adams are big influences on my writing as well as Tom Sharpe and P. G. Wodehouse. To me, humor is paramount.

More stories from Malcolm Twigg and writers in Filthy and other communities.