The early morning air was invigorating. In the pre-dawn light, Hannah groomed her horse in the breezeway of the stable. Sheba, a four-year old roan mare, quietly munched her breakfast of sweet feed and alfalfa pellets from a bucket. She had no idea of the long day ahead of her to the Manzana School House and back. The building was over 100 years old and built by the early settlers in the area.

The approaching sound of her friend’s truck broke the silence of the new day. Hannah had been dating Mitch off and on for a couple of years. When he had offered her the manager job of the horse rental business he started, she jumped at the chance. It was her dream job, and he was her dream man.

Mitch walked up behind her, reached around her and fondled her breasts. It was one of the things she loved about him; the way he touched her. His hands on her body always caused her heart to leap.

She reached back and caressed his neck. Knowing that this foreplay couldn’t go on too long, she turned to face him. “You should go get your horse from the herd. It’s a long ride to the schoolhouse.”

“You’re right,” he said as he picked up a halter and lead rope. If they weren’t going on such a long ride, he would have taken her in the tack room before they left.

Mitch moved up to Popcorn and scratched his neck a bit. He eased the lead rope around his neck and put the halter on. As he led the horse back to the barn, he thought about having sex with Hannah. She loved to fuck, and sex with her was frequently wild and unrestrained. She could be insatiable, wanting more and more until she was spent and satisfied.

“Hey, cowboy! Where’s your mind this morning?” her horse was already saddled and ready to go.

“Deep in your pussy!” he said as he quickly brushed Popcorn and saddled him.

“Hmmm, just where I prefer your hard cock,” she flashed him a smile as she mounted her horse.

“And I’d rather have you mounting me right now, not your horse.” Settling into the saddle, he turned Popcorn and headed down the road that led to the end of the canyon.

Hannah trotted her horse up beside him. Edging the mare close to the gelding, she grabbed Mitch’s arm and pulled him over to her. She kissed him deeply. She wanted him already. It was going to be a long ride.

It was a steep climb out of the valley. The trail crawled upward in switchbacks to the top of the ridge. They stopped to let the horses rest and catch their breaths. It was all downhill now until they reached the canyon floor. The river would lead them to the schoolhouse.

“What a view!” Hannah exclaimed as she took in the mountains stretching eastward. All national forest, it was only accessible by foot or horseback. Too rugged for homesteads, it had never been developed by the early settlers who preferred the wider valleys.

“Let’s get moving,” Mitch said and headed down the trail. He led the way as the dangers of the unknown were all too real here in the backcountry.

The mare followed the gelding easily, allowing Hannah to watch Mitch's body move with the rhythm of his horse’s gait. She knew his body well and loved to touch it. She wondered how far it was to their destination. Her hunger for the man on the horse grew as they slowly descended to the canyon floor.

The small river flowed swift and clear. They dismounted and allowed the horses drink. Mitch took the opportunity to kiss Hannah. He held her tightly, kissing her mouth, her neck, then back to her mouth. He suddenly stopped, aware that the horses were done drinking.

“Let’s get moving or we won’t get back before dark,” he mounted his horse and headed down stream.

Back in the saddle, Hannah hurried her horse to catch up with Mitch. His kisses had aroused her even more. She knew her crotch was wet. By the time they reached the schoolhouse, she would be a hot, wet mess. She didn’t care. She needed him and little else mattered.

It was a pleasant ride through the canyon. The trail followed the river as it wound along the ins and outs of the mountains that rose skyward. She was lost in thoughts of sex with Mitch when he pointed. “Look, there it is!”

A one-room log structure stood by itself in a small clearing. They rode up to it and dismounted near the door. Mitch hobbled the horses so they could graze. He also grabbed a blanket from a saddlebag. They went inside.

“You think of everything, don’t you?” Hannah motioned to the blanket, glad that he had brought it along.

She put her hand on the large bulge in his pants. “And I think about how good it feels when you fuck me with this.” She gave his dick a hard squeeze.

They spread the blanket on the dirt floor and helped each other out of their clothes. Hannah kneeled on the blanket and grabbed Mitch’s dick with both hands. She slowly stroked him while she licked and sucked on the swollen head. As she fondled his balls, she took his cock into her mouth. As she bobbed up and down on it, her tongue was driving Mitch crazy. Such a sensation!

As much as he hated to do so, he pulled Hannah's mouth off his dick. He wanted to eat her pussy, to drive her crazy as she did him. He shoved her down on the blanket. Thrusting his fingers into her wet snatch, he felt her body respond to his movements.

“I’ve been waiting all day for this,” she said, her heart already racing. She looked around at the surrounding walls of the schoolhouse. “Are you going to teach me anything new today?” she teased.

“No, I think we’ll do some review on what you’ve learned in previous lessons,” Mitch played along. His mind raced over past sexual relations with her. She had a long list of techniques, each designed to drive him crazy. Not that he didn’t have a few tricks of his own.

He removed his fingers from her juicy slit and she spread her legs wide. Lowering his face to lick her pussy with long strokes, each one ending with a nibble on her very sensitive nub. She moved her hips in rhythm with his tongue. It drove him mad with desire. She was so damn hot!

Mitch moved to mount her and slid his big cock into her. She gasped as she moved to accommodate all of him. God, she was so hot, too hot! She clawed his back and bit his neck. Knowing he was in for a wild ride, he rode her slowly at first. He paced himself, but she moved her hips even more, trying to encourage him to pick up the pace.

Hannah whimpered. She had reached her tolerance for the slow movements when she really needed more, harder, faster, deeper. “Please, please fuck me now!” Her words were drawn out, each one matching a thrust from her hips, pulling him deep into her boiling depths.

Her hips were more than he could stand. His cock was hungry and he rammed into her over and over! He couldn’t think, lost all control and buried his cock one last time. She opened wider to receive his cream as her own juice gushed forth. Mitch held on tight as her orgasm shook her. He thrust into her a few more times.

Hannah slowly came back from her satisfied sexual haze. “You make me feel so good,” she kissed his neck.

“The way you respond makes me want to take you to another plane. I love pleasing you. You truly enjoy being fucked, and I can’t resist you,” he smiled at her.

Hannah smiled back, wondering how she was going to sit on her horse after being ridden so hard by him. She started to pick up her clothes.

“I’m going to take a quick dip in the river,” she said.

He watched her splash water on her naked body. "I'll join you." 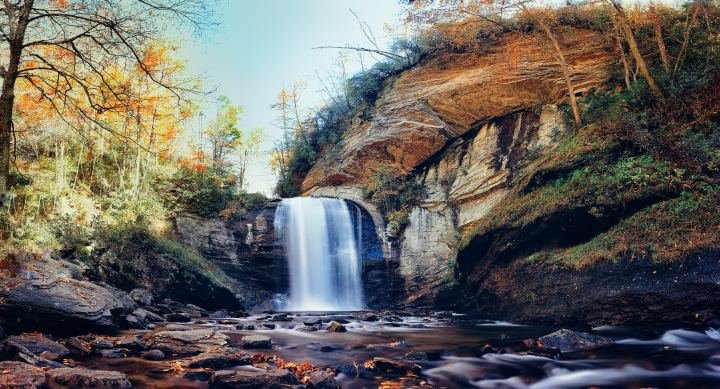 Photo by Justin Novello on Unsplash

I have led an amazing life with many varied interests including loving road trips, being a professional belly dancer, hand carving selenite, providing wise woman advice and intuitive readings for current problems. I love my life. Do you?

See all posts by Jean Sumrall →