by Hedone about a year ago in fiction
Report Story 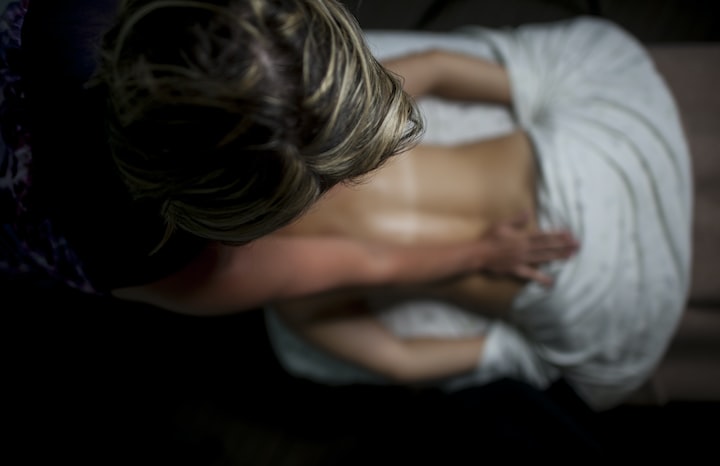 She needs to be touched. That is why she went to him.

It is her turn. He comes to fetch her. She inhales. She exhales.

He introduces her to the room. He leaves, allowing her to prepare.

She inhales. She exhales.

He returns. He touches her.

It is an intimate act. To touch another person.

It is a freeing act. To be willingly touched by a stranger.

They are strangers. She has asked for a service. He has agreed. But that is all they know of one another.

There are rules. They both know the rules. But that is all they know of one another.

He is hands. Hands and soft whispers.

She is flesh. Flesh that becomes sensation beneath his hands.

All she is now, is sensation.

Beneath his hands, sensation exists to become pleasure.

And she transforms beneath his hands.

And what of his pleasure? It also comes through his hands. He needs to touch.

He hands are the conduit, and in this room, his hands create pleasure for them both. It flows from his hands into her flesh and back into him.

There are no words. Excepting what is absolutely necessary. A gentle instruction. A simple response. Each word existing to enhance the work of his hands.

Her eyes are closed. She does not see, so that she can fall more completely into his touch.

His eyes are open. He sees, so that he can make the most of his touches. He looks. He sees.

He adjusts his touch as his experience and her body show him the way.

She is naked. Save for a cool, smooth sheet. Her body is laid out for his hands. It is understood that her body is his to touch.

There are rules. They know the rules. But these rules. They have been established by others. As she lies there, falling deeper and deeper into his touch, as his hands explore her body, she wonders if he will be bound by these rules. And as that thought occurs to her. She wonders if she will. Can these rules stand in this room of skin and hands and touch? Can this flesh and these hands and this touch and these sensations be bound by rules. Sensation is a powerful force. Her thoughts travel and she wonders what all of those possibilities might mean.

They fall into traditional roles. He is male. He will fulfill that role. He will lead. His is the active partner. She is female. She knows the place she wants to inhabit in this dynamic. She will follow. Her role is to be passive. This makes her happy. This surrender fulfills her.

He massages her body, performing what was agreed upon. Her muscles relax. Her body softens and becomes pliant. His hands continue their work. Sensation.

Then there is the sheet. The sheet. He is not quite so careful with it as the rules require him to be.

The sheet is how he makes his proposal. It could be an innocent mistake, easily corrected. It is not. Although he is anxious, his hands have read her body. They are expert. They know.

Her body answers them.

His hands continue their work. Flesh, hands, sensation, pleasure. From him, through her, returning to him.

She is floating. She is warm. She breathes.

There is a new sensation. Cool. He has moved her leg. This was agreed upon. This follows the rules. But the coolness. The sheet should shield her from the cool. The sheet. The sheet is not where it is supposed to be. Cool between her legs. She is exposed. Truly naked now.

Her eyes are closed. She does not see.

His eyes are open. There is no way he does not see what is there. Moist. Glistening.

So. The rules fade. They are replaced with something more instinctual. And with that instinct comes an almost irresistible pull. Sensation. Promise. Pleasure.

She is female. She is prone. She is passive. She needs to be touched. She is patient.

He is male. He is active. He is leading. He needs to touch. His hands decide.

There is a caress. Between her legs. Only one. Just barely. A ripple on a boundary. A vibration on a spider’s web. It is beautiful and entangling.

If she could see his face. She would see an expression spanning joy and relief. Mischief and lust. Experience and fascination.

She holds her breathe. She does not move.

Her heart beats. She waits. Her body waits.

He does not falter. He continues. Following the rules again.

Until there is another touch. Then another, mixed in between caresses that the rules deem appropriate. Their temperatures rise in tandem. Facing no resistance, no reprimand, his hands become bold.

Has he given pleasure like this before? She wonders. She smiles. She does not care. It does not matter because nothing exists but her body and his hands.

Has she received pleasure like this before? He wonders. He smiles. He does not care. It does not matter because nothing exists but his hands, his eyes and her body.

She does not move. If she were to, she would be complicit. Active. If she stays still, his hands remain in control. Silently, in complete stillness she wills him to continue. His hands understand.

He reaches between her thighs to the waiting flesh between her legs. His caresses become specific. Intentional. Purposeful.

She breathes. Can he hear? She does not know. She is breath and flesh. She is sensation and pleasure.

He can hear. He loves the sound. It speaks to him, adding to his own pleasure.

His touch intensifies. Warm. Firm. Exploring. Massaging. Enjoying. Waking the tingling, rippling fire inside of her. Connecting with the desire that is inside of him. She is slick. So slick. And his hands do not hesitate. He slips a finger inside of her. She does not resist. Before she can stop them, her hips rise, unbidden, in invitation. Another finger joins the first, and deep inside she begins to pulse. Her sex grasps his fingers as her hands grasp the sheet. His hands know what to do. Slow thrusts. Pressure inside of her. His fingers know the place. Deep. Filling. Caresses outside of her. His fingers know pattern. The sweetest movements. Tantalizing. Tickling. Electrifying. Her body burns. It pulses. She is sensation. She is pleasure. She knows nothing but the ecstasy of his hands. He continues, taking her to her climax, following her with his eyes. She rides the sensation. The pleasure. Through his hands, his fingers, he receives it back from her. He is awash in her pleasure. He continues. On and on until she returns, coming back to herself.

She is flesh again. Flesh and breath and satisfaction.

His hands smile and he smiles with them.

A gentle whisper: “All is ok?”

She cannot speak, so she sighs. “Yes.”