Around the World with Naked Ambitions

by Rob Sloane 2 years ago in photography

A Nude Photographer's Confessions; In Many Parts

Where to begin the beguine (and not tap dance around the issue)?

This is a confession of sorts, and so it may be better to start with a simple truism and admit: holy shit, photographing really naked ladies; it's cool! It's the dream job! It's a huge amount of fun! It's ...love!

Several dizzy years later and it was off on a plane to London; and halcyon days spent in Kenwood in Hampstead and bells and tambourines and guitars, riffing rhythmic sounds—T-REX and David Bowie and The Beatles and the Rolling Stones, all accompanied by the ambrosia of real Coca-Cola in glass bottles—surrounded by gyrating, bead-dangling, half-naked sweaty cleavage and gypsy skirted Hippies in a haze of bong smoke and saffron with Legs &amp; Co in living colour on Top of the Pops; and illicit peeks between the covers at gauzy, soft focus swollen breasts, fuzzy back-lit peach round derrieres, and alarmingly hirsute (fluffy even!) pudenda in 1970s Playboy's.

All this informed, corrupted, and pulped my misspent and ill-begotten youth; and here were sown seeds of creativity that should have taken root in that fertile artistic loam. Yet, without a channel or vessel for my art, that crop failed to blossom at all. I was reminded ever more keenly of how excruciating it was to attempt drawing, painting, sculpting, writing, or any of the many forms of crudely rendered self-harm I attempted through my adolescent and teenage years. As I entered my 20s, I was, if possible, even more angsty, addled, self-critical and anxious.

Much headbanging and listening to goth and industrial music ensued while I wallowed in my general uselessness in Camden Town, London. (A very good place to be professionally glum—in fact, the more living dead, listless, pale-faced, and out-of-it you are drinking oily red Snake Bites and wandering the Northern Line stops like a Kentish Town Nosferatu—the way cooler you are).

Comic book and painted nude art became my collecting passion: the works of Milo Manara, of myriad Spanish artists, of Simon Bisley, of Richard Corben conspired and inspired, and taunted, my as yet unrequited artistic animus and began to shorten my sleeping hours; an insomniac's funk that has remained with me; that stealthy whispering imagination that has often overridden any sensible and rational bodily regeneration; and forced me to work through caffeine fueled daylight zombification.

Videos matured with the advent of MTV. "Girls on Film," a full-on fetish assault from Duran Duran (the band name, echoing another favourite of mine, Barbarella). Then Malcolm McLaren released the debauched "Madame Butterfly" video; a Playboy double page spread brought to life.

So, like the itsy-bitsy spider of renown, not easily deterred or prone to knowing when to stop (even before starting), I was suddenly gripped with renewed interest. Film, video, photography! These were technical and I knew technical! I had even directed sequences for video games and motion graphics; I had assembled actors for recording sessions and designed cover art.

So even when confronted with my own prosaic mediocrity, and a constant procession of unsatisfying dull video game and IT jobs, I was willing to laugh at karma and fart in the direction of fate. I was certain in my ability to escape my ineptitude, to overcome my many and varied shortcomings, and prove that somewhere, somehow, in some form, I could, and would be vindicated as a tits and ass artist!

Slogging through 1999–2000, I was up-to-my-chin and drowning in corporate design contracting—creating logos and branding websites mainly, with some .gifs and web banners and kick ass "on mouse over" animations for shits and giggles—but, it wasn't helping my malaise; I was still in a state of creative ennui, bordering on permanent po-face and a moue pout at my peers. Little did they know that even 16-bit graphics didn't excite me anymore. Vectors, your face! Polygons, bah humbuggery! 3D-smee-dee, dammit. I yearned for millions of colours and pure photo-realism—I wanted to capture fleshy tones: flushed scarlet thighs, febrile browny-freckled cheeks, dark coffee-stained areola, golden sun-kissed tans, and deeply mysterious trembling wet pinks.

Fate intervened, and not before time; I was commissioned by some editorial people with actual real money to start writing about how the humble pixel was poised to replace film and usher in a digital hegemony; and so to put money where mouth flapped—and shut me up, they financed my spanking newfangled and completely film-less Nikon Coolpix 990.

I had the camera! I had the know-how (...or, more so, I'd got books; quite a few books actually. And several back issues of Zoom magazine; even an exotic copy of Photo France! I'd discovered Man Ray, Mapplethorpe, Bailey, Newton, Hamilton, Jeff Kaine... I'd researched my F-Stops and my EV's and my ISO's to the nth degree of certitude, I knew my histograms, and had worked out what a shutter release cable did; I was technical, practical and methodical and confident that I could actually do this).

I was packing 2 megapixels of spooky futurist doohickey, and felt like a mad scientist! Locked, loaded, loins were girded... but, hmmm, what to shoot? Not what, of course, the nude world was finally my oyster, and I was all in for pearls; but who! Who? 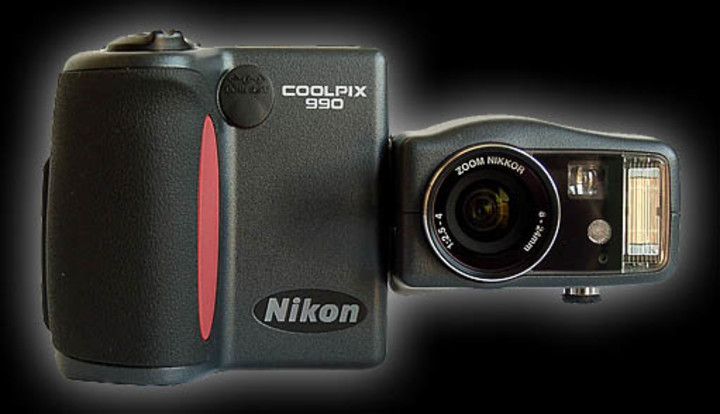 See all posts by Rob Sloane →