by Majique MiMi 4 months ago in Young Adult
Report Story 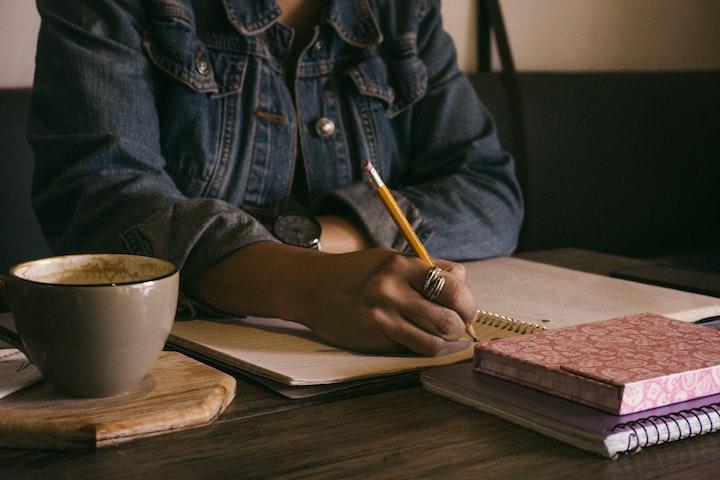 Sadiah must have slept the whole day because her stomach aching and her head was throbbing when she opened her eyes. The room was dark, but she knew Brett wasn't in the bed with her because she could see the alarm clock blinking, eight-thirteen.

Damn I only have forty- five minutes to get to the club. I can't miss work again or Brett will kill me for sure this time.

She got up and shakily walked over to the sink and turned on the light. Her head almost fell off her neck when the light shined in her eyes, but she still backed up and took a survey of her appearance. All in all, Sadiah, still thought of herself as pretty but she thought she may be a "little" skinny. She rubbed her hands over her false, swollen breasts.

But as long as I have these, I'll have money.

She walked over to the bed and reached down under it. She pulled out an old gym bag, put it on the bed and opened it up. Sadiah then took a piece of newspaper, balled it up and stuck it in the drain of the sink. She let the hot water run into the sink as she squirted some cheap bath gel into it. She missed getting a bath but now a days the only way she could get a bath is if she went home with some john at the club. She winced at the thought, took a plastic razor out of her bag and placed it on the sink.

But anything was better than home.

When Sadiah was a little girl she would fill her oversized tub up with suds every night. Her mother would come in and wash her back and they would sing spirituals together. Sadiah's mother was a tall, crimson complexioned woman, with waist length raven hair. Sadiah remembered that Mama had the softest skin.

Didn't even use a washcloth when she washed Sadiah's back.

She didn't need to.

Her Daddy worked long hours at the meat packing plant but when he was home, he and Mama doted on Sadiah. There were always picnics in the park, walks in the Old Market to get ice cream, and of course church on Sunday. Sadiah couldn't wait to turn thirteen because then she could join the young adult choir. Mama and Daddy both promised her that if she brought her algebra grade up to a B that she could join. The last day of the marking period when "Ms. Howard the Horrible" handed Sadiah her report card, she almost threw up.

Ms. Howard seemed to like all of her students except Sadiah. She just thought she was a spoiled snob.

So was her mother frankly.

Neither one of them had to lift a finger because Daddy took care of everything.

Shit some bitches get all the luck, Ms. Howard thought.

If that red skinned bitch had to work two jobs just to put a roof over her head and take care of the two trifling boys that no good husband of mine left me with, Sadiah wouldn't be so spoiled then, that's for sure.

Sadiah waited until she was six blocks away from school before she opened her report card. With her eyes she skimmed past all of the other grades until the very last one.

When she lifted her thumb off of the square a "B" smiled back at her. Sadiah ran the rest of the way home.

When Sadiah got to the top of her block, she hesitated because she noticed there was a police car in the driveway. She began to pick up the pace again until she was running full speed into the house. When she came in the house a female officer was rubbing Daddy's back and he was sobbing.

"What's wrong?" Sadiah screamed as her report card fell to the floor when she knelt before him.

"Go take a shower Sadiah." Daddy said between sobs. "We have to go to the hospital to say goodbye to Mama"

Sadiah took showers instead of baths every day for the next year.

A drunk driver coming home from the market at one clock in the afternoon killed Mama. That didn't make much sense to Sadiah.

Who drinks alcohol so early?

Sadiah was a young thirteen but she did her best to keep the house in order while Daddy was at work. But most of the time she would fall asleep doing her homework which made her grades suffer. Instead of going to church on Sundays, now her Daddy would go out to lunch.

Sadiah was mad at God and never wanted to go back. Daddy just found the memories too tough to handle. Most nights Sadiah could hear Daddy crying through her bedroom wall.

Then one week or so Daddy was coming home whistling and singing Godly songs. Sadiah was happy that Daddy was smiling but she missed him when he would go out at night. Sometimes Daddy didn't come home until three o’clock in the morning. She would stay up until she heard the front door shut tight.

One Sunday while they were at lunch he told her why he was so happy.

"Sadiah, we have a guest for lunch today." Daddy said across from her in the booth smiling.

"We do?" Sadiah said munching some French fries.

"Yes, and she is a really nice lady and I want you to meet her. I like her Sadiah."

Sadiah hasn’t seen her father smile this much since he would smile at Mama singing at church. Even though she felt funny about the whole situation, she figured if this woman made Daddy smile as much as Mama did, she can't be all that bad. Just then she saw her father get up and smile. Out of the corner of her eye Sadiah watched her father lead a woman to the table. Sadiah picked up her milkshake and turned around in the booth.

"Sadiah, I like you to meet..." Sadiah was so shocked her glass hit the floor and shattered. The milkshake splattered all over Ms Howard's dress.

Within the year, Ms Howard had moved in and kept her Daddy happy but made Sadiah's life hell. When Sadiah would come home from school there was always loads of laundry to do, dishes to wash, and toilets to scrub. Sadiah just knew that Ms. Howard dirtied the place purposely just so Sadiah could clean it.

Not to mention that, Ms Howard called her names like, spoiled prissy bitch, and would hit her with a broom when Sadiah didn't finish her work fast enough. Ms. Howard often threatened her that if she ever told Daddy, she would have her youngest son Zeke come over and teach her a lesson.

Sadiah knew what she meant by that and she shuddered at the thought. She didn't even like boys yet and Zeke was not only eighteen but he was ugly, fat, and slow.

Because of that, Sadiah kept her mouth shut.

One day, Sadiah came home and noticed that Ms Howard was gone and Daddy was sitting in the living room goin through a whole bunch of tapes.

"Oh, she's getting her hair done,” Daddy said without looking up.

"Whatcha got there?" Sadiah said as she sat on the couch next to her father.

"Oh,” said Daddy fondly, "Some tapes of your mother singing at church."

Sadiah snatched the tape from her Daddy and began running up the stairs.

"Where you off to? We have a stereo down here?" Her father called after her.

"To take a bath!" she shouted back. Sadiah ran into her room grabbed her tape player and rushed into the bathroom. She filled the oversized tub with hot water and squeezed some of Mama's lavender bath gel in it so it could suds up. She stripped naked and looked in the mirror hanging on the back of the door.

She quickly turned away from the mirror and put the tape in the player and let the sounds of Mama fill the bathroom. She delicately got in the water because it was hot and she didn't want to burn her stuff. Once all the way in she began singing at the top of her lungs. She would reach over the tub and hit rewind so she could re-sing her favorite parts. Her Daddy tapped on the door.

She shut off the music, "Yes Daddy?"

"Okay Daddy." she began rinsing herself.

"Diah?" he said again through the door.

"Turn the music back on. You sound just like your mother."

Sadiah smiled and turned the music on so Daddy could hear her sing. She stayed in the tub for hours. She even drained then refilled the tub when the water got cold. She heard the front door shut and started singing louder for her father. She heard him come up the stairs and she even smiled knowing that Daddy was smiling too. Then the bathroom door came crashing open and the mirror shattered on the wall behind it.

"What the fuck you think you are doing?" Sadiah was stunned. Ms. Howard unplugged the radio and smashed it against the wall.

"I said what the fuck you doing?"

Sadiah was angry now and stood up in the tub. "I'm taking a fucking bath, you dyke looking bitch." All Sadiah remembered after that was being hit back into the water. She had hit her head on the wall and became dizzy and sick.

Ms. Howard was screaming at her saying, "I'll show you a dyke you spoiled bitch." Next thing Sadiah remembers was Ms Howard coming at her with a plunger. Sadiah tried to shield her face expecting blows but Ms. Howard jammed it under the water instead.

Her womanhood was jabbed until she passed out.

The only thing Sadiah regretted was not saying goodbye to Daddy. She stole money out of his wallet left in the middle of the night.

Left with a gym bag full of clothes and some of her mother’s tapes. She's been on her own for about two years now.

It hasn't been all-bad.

One of her johns bought her these tits and when the club is closing the owner sometimes lets Sadiah sing.

Sadiah shaved her legs in the sink and looked in the mirror.

Yeah, she thought, it could be a lot worse.