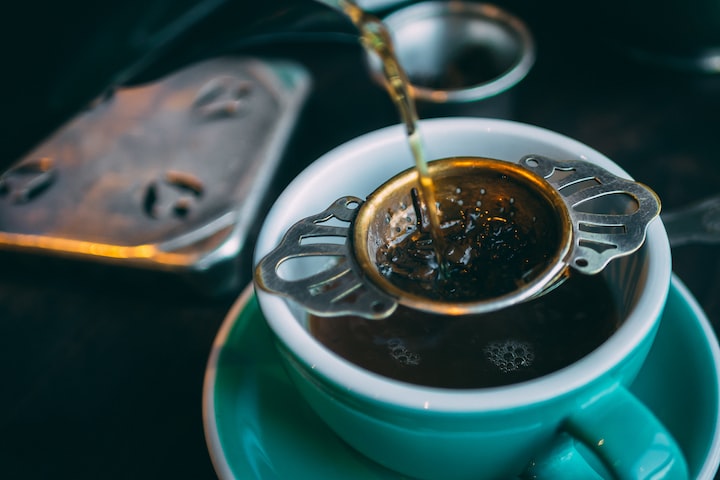 Photo by Matt Seymour on Unsplash

It’s the first Saturday after winter break. No one is at the coffee shop. Everyone’s sleeping in. That’s what everyone does on a Saturday, which is why Karina is here getting tea.

She's tried buying her own loose-leaf tea, but it’s always fresher getting it here. Maybe the atmosphere has something to do with it.

Back when she was a child this old building had been a fancy restaurant. Mama would slow down as she passed it when they walked to the grocery store, but they never went in. Now the wallpaper had been stripped, the concrete floors bared and old fashioned lightbulbs hung from the ceiling in place of the classic fixtures she remembered. It was supposed to be “industrial chic” or something like that.

The Gray Cat, or as her dad calls it, The Gay Kitty. So what if it is gay? What’s the big deal with having gender-flexible bathrooms, hipster baristas, and more varieties of tea than coffee? The drinks are good and the atmosphere welcoming. Maybe she’s glad it’s gay—if that means more love to go around. Who wouldn’t want an extra measure of love with their drink?

She settles into the couch with its back up against the front window.

The chaos of background music mixing with the sounds of the city waking up and people passing her for a late-morning pick-me-up become her breath and heartbeat: fading into the background, hardly noticeable but keeping her alive all the same.

Someone sits down on the other end of the couch. The couch feels so small all of a sudden. Karina pulls her knees up to her pounding chest and keeps reading.

“Is this your first time reading The Lord of the Rings books?”

Karina tries to ignore the expectant observer. Grinding techno music drips through her broken focus like acid. Really, who thought this song was a good idea for The Gray Cat on a Saturday morning? What happened to laid back and relaxed?

Whoever had tried to talk to her gets up and moves to an empty cafe table-for-two, alone.

She almost forgets her tea. It’s finished steeping now. She lifts the strainer full of leaves out of the mug and sets it in the little metal bowl provided. This is how tea should be made. This is why The Gray Cat is the only coffee shop around worth visiting.

Now that no one is interested in bothering her, Karina scans the shop. Business is picking up as the sun gets higher. Mostly couples on breakfast dates. The pastries are supposed to be really good here too, but Karina never gets anything but tea. She wouldn’t want to try to read with sticky fingers.

A pair of students sitting at the bar are playing footsie under their lattes. The way they look at each other, they’re probably on their second date. He’s enamored. She’s tentatively flirtatious.

She slips off her shoes and tucks stockinged feet underneath her, scarf nestling up against her ears as she settles deeper into the cushions. The music is better now, the kind of indie that blends perfectly with low conversation to create a cocoon of white noise perfect for reading.

So she reads, sipping every few paragraphs until the tea is gone, then she reads on. This is what Saturdays are really for, after all.

People come and go. She sees them out the window, feels them as they pass inside, hears them gossip nearby. Acknowledging them would be too much of an invitation for interruption and she is not interested in anything but finishing her book right now.

When she finally gets to the last page she collects herself, putting on shoes, returning mug to counter, and exiting the coffee shop in one smooth movement — the kind of collected, purposeful movement that says, “I know what I’m doing and where I’m going, don’t interrupt my flow.”

Either people don’t notice her at all or they get the message. She begins her walk home in peace.