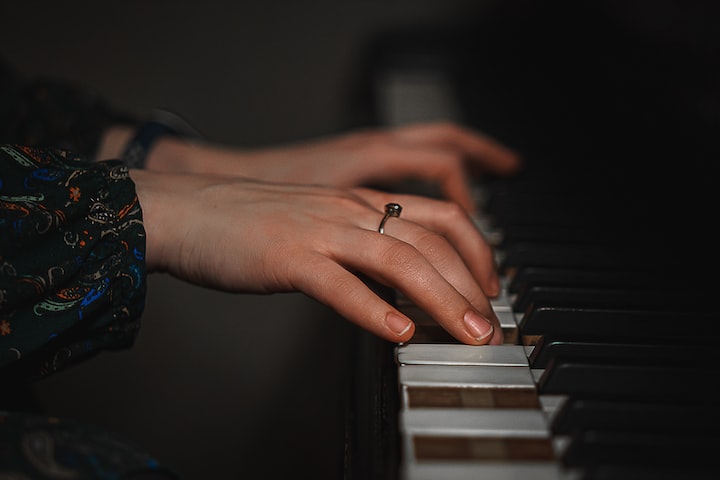 Photo by alexey turenkov on Unsplash

Thursdays are nice. It’s hard to put a finger on why. Maybe it’s because they’re so close to Friday and yet the break of routine that comes with the weekend isn’t quite imminent.

Karina wanders home the long way, through the old neighborhood to the east of campus. The church on the corner invites her to make her wandering a bit more adventurous so she squares herself up to the cement steps like they’re a rugged mountain. She peers through the windows into the dim auditorium. Empty. On a whim, she tries the door. It’s unlocked.

The boots she’s wearing make her footsteps echo in the emptiness, even when she walks on her toes. She slips them off and leaves them behind the pews. Her socks muffle her footsteps nicely.

The grand piano invites her to play.

It’s been so long…

The darkness of her surroundings nods, reassuring. Surely a little bit of stolen music wouldn’t bother anyone. Her fingers brush the keys as she takes a seat on the bench. She tries a single note, then a chord.

The sound hits the silence and echoes back to her. The empty space begs to be filled with music so she plays a slow scale, then lets a love song flow from her fingers. That one about immortality or something. She doesn't know what it means, but it was popular and made her feel nice enough, so she had figured out how to play it. It does the same today; she’d forgotten how good it feels to make music.

She lets the last chord linger. The sound reverberating off of the vaulted ceiling makes her take a deep breath, deeper than she has in months. The last time she breathed that deep was when she was still doing yoga in the mornings. She should get back to that.

She holds her breath for a moment, watching and listening for any sign of another human being in the building. Surely someone had heard her stolen music.

When she can’t hold it any longer, she lets out her breath in a sigh and places her fingers back on the keys. If one song hadn’t brought down judgment, why not play another? This one from an old movie soundtrack, a haunting invitation to visit a world of imagination, that world which was always so comforting to her. She spent more time imagining than out in the real world; perhaps that was part of it.

Once she finishes reading The Hobbit and The Lord of the Rings, she should reread Charlie and the Chocolate Factory. Playing the song from the movie makes her miss the story, the tale of the magical world of Willy Wonka.

The minor notes are simultaneously creepy and welcoming. They promise other-worldly pleasure and adventure, the way fae folk do—dangerously, demanding a price.

…What we'll see will defy explanation…

The book is better than the movie in all aspects except one. The book lacks a soundtrack. Words on a page are magical, Karina will never deny that, but there is another kind of magic in music. Put good words to good music and the compelling power is irresistible.

…Living there, you'll be free, if you truly wish to be.

The song sounds better in the church than it ever had before, even though she’s missing notes all over the place. Playing a tuned piano makes a big difference. The acoustics of the auditorium probably have something to do with it too.

The final chord rings in the air—or it is only ringing in her memory?—as she pulls on her boots and slips out the door.