Underneath The Pear Tree

by Leigh Hooper 28 days ago in Short Story 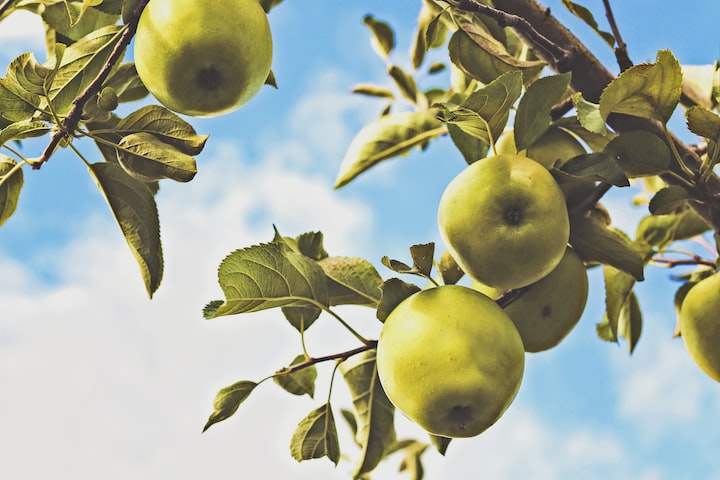 Thomas sits underneath the pear tree with his back resting against the base of the trunk.

Stretching out in the field in front of him, children are playing. They run around with toy guns and they yell at each other in an overdramatic game of tag. One child spots another hiding behind the bushes at the edge of the forest. He points at the cowardly boy, and then runs off as the boy in the bushes fakes his death. Thomas smiles; children's imagination can be so creative.

At the base of the pear tree, Thomas sighs and closes his eyes. He listens to the sounds omitting from the field. The yelling of the children is all he can hear, but he trains his ears to drown out the noise. Yes, he can hear it now. The sound of a plane flying overhead, circling the field. A rumble sounds in the distance, and Thomas wonders if a storm is coming. If it is, he is grateful for the shelter the pear tree will provide him.

When Thomas opens his eyes again, the children are quieter. The sun is beginning to set now, although he doesn't remember falling asleep for the time to pass so quickly. He shuffles against the base of the pear tree. His body feels numb from staying in the same position, and it's only when he moves does he realise the red flowers that have blossomed around him.

They're pretty, yet he's unfamiliar with the flora. He reaches out to touch them, and drags his hand through the petals. His skin comes back red, and he frowns.

Noise nearby forces him to look away from the flowers, look towards a man he's never seen before. The man approaches him like a snake, crawling slowly on his belly. Thomas doesn't understand, but he wants to.

"Are you okay?" The crawling man whispers with urgency.

When Thomas doesn't answer, the crawling man asks again. He whispers louder this time, and a drop of spit lands on Thomas's cheek. He doesn't understand where this man has come from, or why he cares, but he answers the crawling man anyway.

"Of course I'm alright." He croaks, not realising how long it has been since he last spoke. Now, his throat feels dry. Thomas licks his lips, notices how cracked they are, and frowns. How long has he been sat under the pear tree, admiring the red flowers and watching the children?

Thomas jerks to in the dead of night. He has fallen asleep again, and the crawling man is nowhere to be seen. There is silence across the field. Perhaps there wasn't a storm coming after all. Perhaps the children have all gone home, ready for a peaceful night's sleep. Perhaps, when Thomas notices something in his peripheral vision, it isn't what he thinks it is at all. It isn't a fox, awake in the dead of night searching for food.

It is a soldier, a soldier from the other side, and Thomas finally realises.

The children were never children, and the red flowers were never really there.

Thomas is sat against the base of a pear tree, at the edge of the battlefield. He has been shot in the stomach, with the bullet never exiting his body, and his blood has tinted the grass around him red.

The children he saw are soldiers, but some of them are as young as eighteen, perhaps younger if they lied. The toy guns are real, and the game of tag is a fight on the front line. Nobody is faking their death.

The planes drop bombs, and the rumble of the storm is the sound of grenades.

The crawling man is a comrade, who may now be dead for all Thomas knows.

Thomas is twenty-four and before the war he was a mathematics teacher. He has a girlfriend back home who loves him dearly. She writes letters when she can and she waits with a heavy heart for his letters to return. She won't receive another letter now, but Thomas wonders how long she will wait until she figures it out.

Thomas's brother is also on the field. They haven't seen each other in weeks, and Thomas tries not to think about it.

It was nicer when it was just children playing games, he thinks, and Thomas closes his eyes for the very last time.

This is my last entry for the SFS Challenge, and you can read all my entries on my page. It has been super fun to explore all of these prompts, and congratulations to everyone who participated and to those who have won!