by Laurie Walls 2 months ago in Fantasy
Report Story 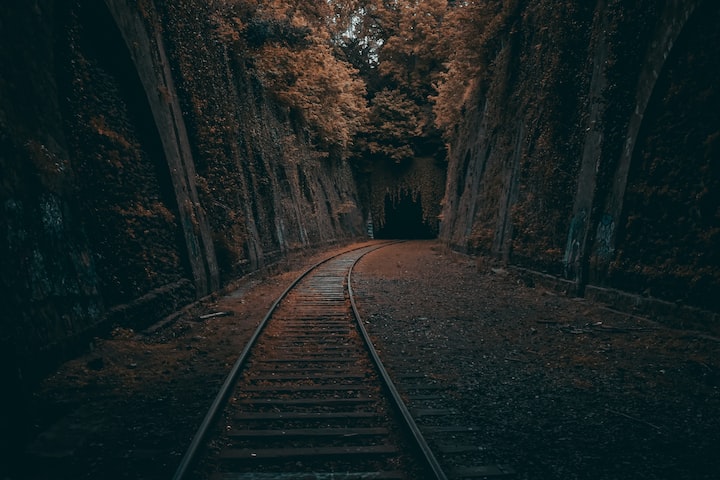 Because I could not stop for Death –

He kindly stopped for me –

The Carriage held but just Ourselves –

Clunk, clunk…clunk, clunk…clunk, clunk. One, two…one, two…one, two. The consistent noise evolved into counting numbers. Not more than one, two, but the counting continued for an undetermined amount of time. A woman lay slumped over on a table which sat in front of her. The woman, Katherine, Kate to her friends, was in her mid-40’s. She was dressed in grey dress pants, a white buttoned-down blouse, grey suit jacket, and black boots with a mid-heel. Kate sat up, bleary eyed and confused. Where am I? She sat in silence, her stupor profoundly impacting her ability to understand the surrounding. Moments later, she became aware that she was sitting on a train. The clunk, clunk, blending into background noise.

The counting one, two, stopped. Kate glanced around the car and realized, to her surprise, she was alone. The car was empty – no people, backpacks, briefcases, cups of travel size coffee, headsets, phones. The car was clean, no trash, unread newspapers, or discarded magazines. It appeared like any other train car – gray interior, black floor, white tables situated between the rows. Kate rubbed her head – it was throbbing. She blinked repeatedly to clear her vision. Why am I on a train? How the hell did I get to a train station? She placed her head in her hands and rubbed her temples. The headache was almost unbearable. Standing up, she began to move about the car, looking for something, anything, to clue her in to her current situation. Was this a dream? Am I asleep? She pinched her arm. Ouch! Nope, definitely not sleeping. Ok, ok, think about this logically, Kate. What is the last thing I remember? She sat back down and closed her eyes and an image began to form.

Kate woke with a start. What was that? Did I fall back to sleep? She wiped the trail of saliva from the side of her mouth. It was then that the tiny hairs on the back of her neck stood on end. Kate realized she was not alone. There was a man sitting across the aisle. He was an older looking man, in a cream linen suit and white shirt. She also noticed he was barefoot. Kate edged back to the side of the car and croaked “Who are you? How did you get here? Were you just watching me sleep, creeper?” The man smiled and chuckled, “relax child, I mean you no harm.” "You did not answer my questions! Who are you?” Kate’s voice raising more than she intended. “You may call me Joe.” The man responded. “Joe? What is your last name?” Kate inquired. “No last name?" "No, just Joe.” “Ok, well, just Joe, I have no idea how I got here, or when I got here or where I am now. I woke up with a massive headache and cannot think straight. I am on the edge of a massive freak out so unless you want to be on the receiving end of the freak out, you need to start explaining.” Joe sighed and said, “I am sorry about that, I forget sometimes that humans have such a fragile physical form.” He looked at her and a moment later her headache was gone. “How – did you? Did you do that? Did you make my headache disappear?” Joe smiled. “Yes, child, I did. Headaches are an unfortunate side effect of traveling to this…place.” He responded. “Place? Seriously, what the hell is going on?” Kate started to breathe faster and faster, and she began to feel light-headed. Joe leaned forward and said, “I will explain everything, child. Try to relax.” Kate looked at this stranger and felt an odd familiarity. “Do I know you? Have we met before?” “No, we have not.” Joe answered. Despite not knowing him, she felt oddly comforted by his presence. Usually Kate was highly suspicious of strangers but for some reason she did calm and her breathing slowed to normal. She looked at the man – he had kind eyes, and laugh lines, and something about him radiated calm. Kate took a deep breath. “Ok, ok, I’m calm. Can you please tell me where I am and what is going on?”

“How does God determine who goes to the After? Isn’t there some sort of system?” “This is where traditional religion gets it wrong. There is a balancing scale but remember God knows all. They know the secrets of your soul. They see your entire life. They see your actions, your regrets, your motives, your triumphs and failures. By human standards there are individuals who seem truly evil. And they are – the acts which they perpetrate are unimaginable. However, when one of those individuals finds him or herself on the train, the secrets of their life become clearer and known. Often those secrets include abuse, absence of love, mental illness left untreated. When God creates a soul it is perfection. When the soul is placed inside of a human vessel, it becomes subject to all manner of things.” “Like what?” “Like genetics. A soul enters a human, and is in the mother’s womb. The human form is vulnerable and fragile and if exposed to genetic deficiencies…” Joe trailed off. “If a human is born without such genetic corruption, then it becomes vulnerable to outside variables.” “Why doesn’t God remove those negative aspects?” Kate asked. “Because then it would not be life as you know it. God gave humans free will. And when they did, God removed themselves to a certain degree. Yes, God could manipulate your existence whenever they saw fit, but that was not part of the plan. God wanted to see what humans would do, if left alone from Their influence. And humans have created amazing things and have evolved in ways which continue to amaze me. And yet, some humans, have become cruel, solely selfish individuals who are greedy and hungry for power. These humans do not care to what expense they achieve as the end result. Kate, free will can be a wonderful thing, but it can come at a price.” Joe finished.

Kate stood up and began to pace. “Ok, ok, so do all humans have a choice to return? What about older people, people who die of natural causes? Do they have the choice to return?” Joe smiled, “No, they do not. When a human is born, he or she has a natural cause expiration date. So a person in an advanced age, who dies of natural causes, finds himself on the train, the only option is to move forward.” “So, I am here and have the option of going backward because it is before my true time?” “Yes. That is correct.” Joe answered. “Will you tell me how I ended up here? What happened?” “Yes, I can tell you.” Joe responded. “Kate, you were on your way to meet a few of your friends for dinner. As you exited your office, you were walking the six blocks to meet up with them. A young man ran passed you and grabbed your bag. You continued to hold on to it. The young man proceeded to jerk and pull your bag. At some point in the scuffle, you lost your footing and fell down the stairs to the subway. Your body lay at the foot of the stairs, motionless. People on the platform began yelling for authorities and someone called 9-1-1. That is the point your soul traveled to the train. Your body is in the Emergency Room at St. Vincent Hospital and you are in critical care.” A long silence lapsed between the two of them. “I see” Kate responded. “Is there anything else I need to know?” “Yes, child. I have to give you all of the information so that you can make an informed choice. If you choose to go back, you will have brain damage. You will have to learn to walk and talk again. You will spend months in a rehab facility and the life you knew before will be a memory. It will be difficult and there will be times you wish you had died. However, I can say that you will, at some point, be able to function independently and live on your own. It will be a daunting task, but you will persevere.” “And if I choose to move forward, will I see my mother and father and paw paw again?” Joe smiled brightly, “Yes, they are waiting for you.”

“How long do I have to make this decision?” Kate asked. “The train will move as long as you need it to. Once you have arrived at your decision, the train will stop at the station and you will choose.” Joe answered. “It sounds like my life will be awful if I return. On the other hand, if I move forward, I get to see those who love me.” “Yes, I suppose that is one way to look at it. But, you are also missing the point.” Joe asserted. “The point? What is the point?” Kate queried. Joe grinned so wide his eyes almost disappeared. “Life.” Kate looked startled but looked up into Joe’s bright eyes. After a moment, she heard the brakes screeching as the train slowed down. Joe stood and said “You’ve made a decision.” Kate nodded and stood. “To the right is the After and to the left is the before.” Kate took one last look at Joe and said, “Thank you” as she stepped into the light.

More stories from Laurie Walls and writers in Fiction and other communities.