The Season of the Golden Bull

by Gregory D. Welch 4 months ago in Fantasy 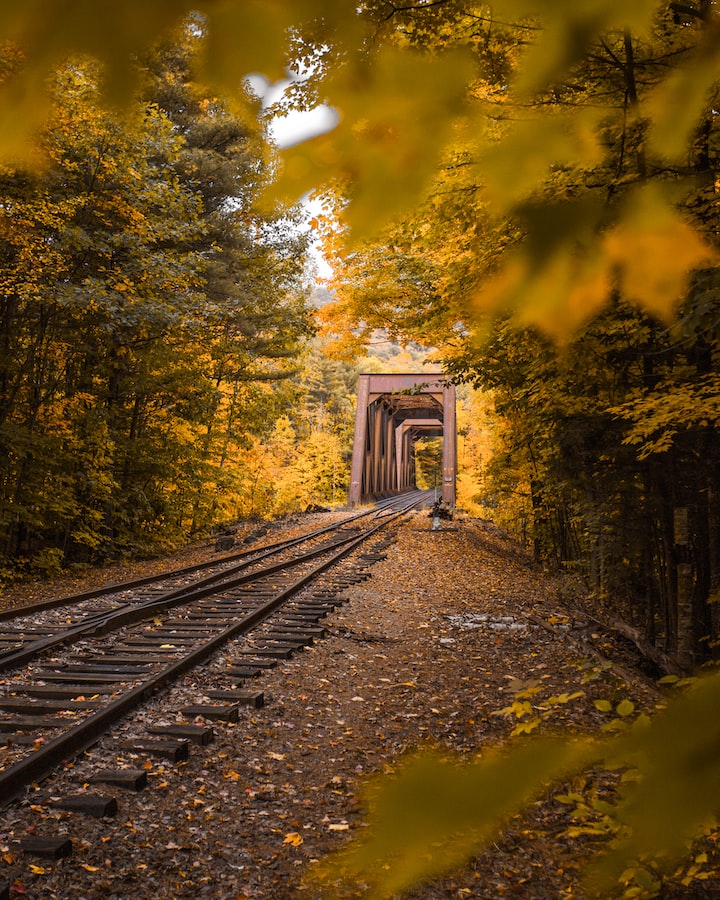 Photo by Evan Leith on Unsplash

I was just a girl in the late Summer of 1944. It was the season of the golden bull, and all the chaos it brought to our little clapboard house with the train tracks running through the front yard, cutting the world into sections of here and there, have and have not, hungry and fed.

I saw a side of my brother I hadn't seen since before he went off to fight in World War II. His eyes smiled in a way made of pure innocence and a happiness wholly unguarded.

I was hanging laundry on the sagging stretch of clothesline out back of the house and needed a little help getting one of the big blankets up and over the line when my brother showed up as if he knew.

"Wanna sneak off and see what the peddler has in that wagon?" my brother said, smiling from ear to ear. He grunted a little, lifting the big blanket to the line. I guided it over. "Bet ya he has some real neat trinkets."

"Daddy said we were to tend our chores," I said. "And he said not to go anywhere near that wagon and those trinkets. Besides, where are you going to get any money or anything to make a trade?"

Jimmy reached in his pocket and pulled out a little stash of coins. His eyes shined and his smile grew even bigger.

"Jimmy, where in the world did you get that?" I asked, looking around to see if Daddy was anywhere close. Daddy would have been infuriated if he thought Jimmy was making money and not sharing with the family.

"Earned it a while back, been saving it for a little foolishness," He said and laughed.

"But Daddy said we have chores to do," I said. Feeling a tug of war between excitement and worry being played in my stomach.

"Thing about chores," Jimmy said, "No matter how many you do, you have twice as many left."

Jimmy and I took to the train tracks just as soon as we had gotten out of view of the house. Daddy was napping and Momma was busy being as quiet as she could while doing one chore or the other. It was the perfect time for sneaking out and getting into trouble.

My brother Jimmy and I used those tracks to go everywhere. If Momma saw how many miles we walked on those tracks she told us sternly to stay off of, there would have been far fewer branches left in that big fat tree standing tall and proud on the one little sliver of green grass and parched Earth that was all ours.

We cut through town, what little there was to see of it. Waving at Mr. Hensley who was smiling from his front porch. And before we knew it, we were heading just past the post office and little general store, more than halfway to the field where the old trader had set up camp.

Ask anyone in town and they'd tell you they didn't want the Trader doing business anywhere near town. But go out to see the trader yourself and you'd see more than a few of those same folks cutting deals and striking bargains. There was little else to do in small towns with few roads that led anywhere significant. We sat in a crossroads of possibilities, every one of which was too far to reach anytime soon.

And then we were at the field itself, and what a sight it was to see that old trader's wagon with its high curving top, brightly color painted sides, with one wall lifted so reveal all his goods and wares. The whole thing sat on big strong wooden wheels. No motor in sight, no car or any other mechanics needed just the trader, his wagon, and one big old ugly horse that could pull any stump from any ground anywhere around.

"Well, well now, what do we have here?" said the trader, a short fat man with a half-chewed cigar hanging from his mouth. He wore a theatrical-looking pair of pants held up by a dull brown pair of suspenders and wore a matching coat with complimentary top hat that looked well taken care of but a bit worn at the edges.

My brother and the trader shook hands, and then the trader turned and looked at me with a big smile.

The trader turned and faced his wall of odds and ends, and then he made a motion toward a little porcelain doll. My heart sank, it was the absolute last thing I wanted. But then the man looked at me over his shoulder and gave a wink, his hand quickly going to a little golden bull sitting next to a collection of old leather books. He snatched the bull up and brought it back over.

"Do you know what this is?" he asked.

I shook my head.

"Why it's a bull, of course," he said and laughed. "But you're right to shake your head, it isn't just any old bull. Why this is solid gold from the most exotic corners of the wide world, yes ma'am."

I couldn't take my eyes off of it. It was beautiful and reminded me of the farms I often daydreamed of owning. A summer farm with big fields overflowing with things to eat, and animals to make friends with.

"How much?" I heard my brother ask.

"Three dollars," said the trader, one eye squinting at my brother as he rolled the cigar around in his mouth.

"I've got a dollar twelve, we make a deal on that?"

The trader took a deep breath and whistled it out. Then he pulled the little bull back close to his chest and shook his head.

"No sir, I'm afraid that won't quite do it" and then looking at me for a long moment, he turned back to my brother and said, "But I tell you what, I've got some magic dirt here I'll part with for a dollar and that shiny dime. You can keep the pennies to plant later."

"I ain't slow Mister," Jimmy said, an edge to his voice.

"I ain't called you slow, where in the world would you get that? No sir, takes a wise man to invest in a little plot of magic such as this," said the trader. "What you do is take this dirt and lay it down somewhere that moonlight kisses the Earth, and plant yourself those pennies in it. When they start to grow penny trees, you pull three dollars worth off them bushes and come back and see me."

Jimmy and I walked home guarding that magic bag of dirt, its magic already soaking into both of our minds. All the possibilities for Jimmy and the world beyond our little town, and for me, that little golden bull with all the details carved into it. I always have been simple in my pleasures.

But no sooner than we got home than trouble found us. Daddy was up from his nap and looked a bit like an angry bull himself.

"Where in the hell have you two been?" He said with a growl.

James looked at me, and I looked at him. Neither of us got a response in before Daddy looked at the bag of dirt, looked at Jimmy, and then furrowed his brow like he was about to charge him.

"You been up to that con man's wagon, ain't ya?" he said through clenched teeth. "Don't tell me you traded something we need for that."

"Wasn't more than a dollar," I heard myself saying, not even sure why. And then I felt the air leave my brother as he winced.

"Daddy, I earned that money and…"

"You stay in my house, robbing me of money that could help put food on this table that you eat without a second thought and you go and buy…dirt!"

Daddy stomped across the yard then, grabbed the bag, and flung it out by the big tree. He slapped my brother hard across the face and told him to get inside. He snapped his head back at me and gave me a nasty look. I knew it meant to stay where I was.

I stayed right there and listened to the yelling, the shouting, the even more disturbing quiet that came after. I stayed outside until Momma came and got me, and by then I had watched the sun wobble off behind the horizon and a little sliver of Moon show itself just behind the house.

I tossed and turned in my little bed until I couldn't take it anymore. I knocked quietly on my brother's door, and when he didn't answer, I eased it open.

I heard the muffled sound of him crying. How many hours had it been? And had he been crying this entire time? I saw his face turn toward me then, and the red welt of where my father had hit him.

"Moon's out," I said. "Kissing the earth, just like that trader said."

"Ain't no magic in the world sis, just a fool and his money being parted," He said and rolled away from me.

"I'm going to plant some pennies," I said. And then I eased my way through the sleeping house and found my way outside.

I didn't think I'd find enough of the dirt to make a patch, but there was just about a handful left in the bottom of the bag, which was still laying by the big tree. I studied the yard for a good patch of grass where the moonlight shined brightest and then dug a little hole just deep enough to put the dirt in and plant two pennies.

Luckily, Jimmy had given me the two pennies before we got back. I held them up in the moonlight, kissed them, and then planted them in the fresh dirt. I patted the ground firm over them and then found a little stone and laid it next to the spot so I'd remember it.

I went back inside and for the next three days, nothing happened. I gave up on it by the fourth day and almost forgot about it altogether when I spotted my brother out my window sitting by the tree crying over the spot I had planted those pennies. To this day I still don't know if he knew that was the spot I had planted them or not, but his tears must have been just the water those penny trees needed.

It was one of the happiest moments of my childhood, and the look on my Daddy's face when he saw those bushes was almost as good as going back to the trader and buying my golden bull, or my brother harvesting just enough money to buy a bus ticket later that year and heading out into the world on his own.

The little penny bush stopped growing pennies not long after my brother left, and dried up completely by the following Spring.

Just the other day, one of the nurses that tend to me, accidentally bumped my little bull from off of its shelf and it cracked right down the middle. The nurse thought it curious that a golden bull should hold so much dirt inside, and I began to cry. At first, sad that the bull was broken, and then happy at all the rush of sweet memories of my brother. And then I wondered what I'd plant this time.