by Rafael M. Lench 11 months ago in Fantasy
Report Story

"The light will guide you" 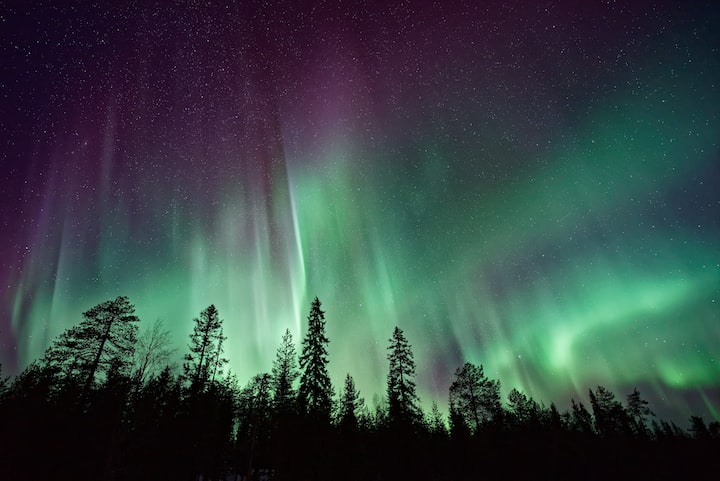 Photo by Vincent Guth on Unsplash

-Why can I not remember?

The questions hung in silence as the one who spoke these questions silently floated in empty darkness, unknowing as to what their fate will entail, and hoping that they would soon find something … anything.

Then before them came a light, a beautiful white light that seemed to beckon to them. promising liberation, hope, and freedom. The individual could think of nothing else as they rushed at the light, not really feeling that they were running, yet knowing that they were moving forward, not knowing how this was happening. Yet no matter how fast the individual ran, the light did not draw closer to them, and in fact appeared to be getting farther away, dimming as it went.

The individual tried to reach, but soon the light became so dim as to be just a dot in the distance, only to finally wink out of existence, leaving the individual in darkness, alone.

-So, that's it then, I am trapped here in this dark place, I don't know what I did to deserve this, I don't even remember what I did, I don't even know who I am, so why does this have to happen to me … why?

The individual could only remain in the one spot they were in, unable to know how much time passed, unable to even feel where they were, only seeing absolute darkness wherever I looked.

-I must have been someone truly malicious to receive such a punishment, yet I do not even remember my crime ...

It was in but an instant, another light appeared, this time instead of a pure white glow, it was instead a radiant green, shining bright and warm in the darkness, coalescing into a tunnel of light that rippled in wave-like patterns.

Unlike the white light that had appeared before, the green light felt far more, welcoming, than the white light. The light gave off a different feeling, a feeling of safety, assurance, peace, sanctuary.

The individual entered the tunnel, and felt as they were pulled forward into the radiant green light, the waves 0f green light rippled past as the individual continued on into the tunnel, a sense of ease filling its mind. Then the light in the tunnel darkened slightly, now taking on a darker hue, the light becoming 'thicker' in a way, and the 'Klein' wanted to know wh-!

-Wait, I am 'Klein', that is my first name, but why am I remembering it now, why did I forget my name unti-!

'... hahahaha, it was hilarious, you actually thought that anyone could ever be with someone like you, you are such a joke that its hysterical, hahahaha ...'

-AGH, w-what is that, what is happening, AGH!

A searing pain tore deep into 'Klein' as 'he' fell through the tunnel, briefly glimpsing images as 'he' fell to the exit of the tunnel, the feeling of something working its way through 'his' … existence as well as the images of his memory appearing in his mind.

-Ah, so that is what happened to me.

The tunnel of light soon ended, and in a burst of green light, 'Klein' felt 'himself' hit solid ground, yet the fall hurt no more than if 'Klein' had just tripped, rather than what would be expected from the high-speed impact that 'Klein' experienced. Rather than the fall, it was the memories that returned to 'Klein' that held all of 'his' attention.

-I recall my life growing up in a small town in Colorado, a town called West Lock, was raised by my mom, never knew my dad except from photos, and I ...

-Thought I had friends, a girlfriend, a family, and good 'companions'?

-Wait, what is this, there is more memories, I was a young man in a country called Arel, I was raised as a farmhand but became a common soldier to the Imperial family, I worked and fought my whole life, and became a Knight in the army. What is this, these creatures, these phrases, and everyone I met in that life, why do they seem so similar to everyone when I was 'Klein' and my name was once 'Allen'. What is happening, who am I anyway, am I 'Allen', 'Klein'?

-I am just going to call myself Len for now.

Len slowly got up, and gazed around to see what was around, and was stunned at the sight.

-An overgrown ruined city, strange ruins and structures that I do not recognize, and I am next to what looks like a ruined church, and there is still some glass on the win … dows?

Len gazed at the glass, seeing the current state of 'his' body, seeing that it was not the body 'he' remembered, and that the body was not a normal human body.

-Long, charcoal gray hair going to the mid-back, a face that could pass for a boy's or girl's, and a body that could either be male or female, and has no distinguishing gender traits, no nipples, no genitals, it looks like the body of a doll. I guess that makes me truly Androgynous, I am neither male nor female, and I appear to have something running across my body, they look like small glowing roots, and that green light is coming from the roots and my body.

-So, now that know what happened to my body, I guess now I have to figure out what I have to do now. Actually, the first thing I need clothes, seeing as I am standing in the open air with nothing on, hopefully this church has some clothes I can use.

Len entered the church, wondering what 'he' will find when he enters, hoping that there would be something … to?

In the center of the church, growing out from the floor among the shattered remains of the Pews where the congregation would sit was a single white tree, green light radiating from its entire frame, the leaves glowing with and radiating the same green light. Against the tree was a single staff made of the same white wood, and wrapped around the staff were bundles of cloth that Len could make out as clothing of a sort, along with some simple boots with soles that seemed to be made of rubber, or something like it.

Len's hearing was still coming around as 'he' was looking around, but now that they healed, 'he' could hear the sounds of conflict and violence happening in the lands around the church, and 'he' began to hear the sounds getting closer.

The clothes, all dark green in color, were a mix of masculine and feminine attire, being made up of a long sleeve shirt, thick vest, stockings made of a thick fabric and short pants that went to the knees, though no undergarments were in the bundle.

-Though since I don't really have anything to cover, I guess the need for undergarments is quite unnecessary.

The clothes and boots now on, Len grabbed the wooden staff, just as 'he' heard the sound of something rushing straight at 'him', the sound of huffing, growling and violent hissing was heard. In the moment Len touched the staff, everything seemed to go still, and in Len's mind appeared the thoughts of battle, when he first gripped a sword, trained in wielding it, and used it to kill.

A single slash was met by a burst of sickly green fluid and the fall of a body onto the ground, along with the loud wail of the unknown creature as it fell, and died.

Len found 'himself' wielding a single edged sword made of the white-wood, the edge glowing with green light, the sword itself with no real features but an intricate shape, having shifted into the shape of a sword the moment Len swung it. Next was what lay at Len's feet, a sight that frightened and disgusted Len, the sight of a loosely humanoid monster, skin dark grey with large amounts of black roots running across most of the creatures body, its limbs were twisted by the roots into jagged points that elongated the limbs as well as a third arm beneath the right arm that was more a sword than a spear. The head of the monster was completely gone, consumed by the dark roots, which left a dark mass of roots with some glowing spaces, the spaces weakly let out a sickly green light that Len found disgusting to look at, the light causing Len to think of rot, decay, and malice.

Then Len turned as he heard a slight movement behind him, just as another, larger monster dropped to the ground a short distance from where 'Len' stood, the monster dead from several large arrows that were embedded into its chest and 'head'. The one who killed the beast stood a bit behind the monster, revealed to also be an androgynous person with only slightly more masculine features, wearing a hooded coat and long pants, same boots, but with their hair much shorter than Len's.

The person did not speak, only nodding to Len, which Len returned, the silent dialogue between the two was brief, yet to both Len and the other, their words were clear as any other.

-I see, I understand, I will follow you there.

The other nodded, taking off toward the city, with Len following close beside the other … no, beside Enel as 'he' guided Len through the winding pathways, broken streets and crumbling ruins, heading toward their final destination, which lay at the very center of the world they were now in.

Enel told Len as they traveled everything 'he' had learned from others who inhabited the world, with those like Enel and Len being known as the Amour, who maintained their minds, wills and almost always went out of their way to aid their fellow amour. The other were the monsters that inhabited the world, similar enough to one another to be the same, known universally as the Malice, known for their immense hostility, destructive nature, and the fact that they not only attack amour but even others of their own kind for either little or no reason. Enel told Len of how Amour who awakened in the world joined together with other Amour in a single shared goal, one that Len came to realize as they traveled, which was 'to reach the Sanctum' a safe place where the Amour will find the Salvation they had always sought.

-I truly hope we find our salvation there.

Len already knew why 'he' sought salvation, and upon hearing Enel give 'his' reason also realized that their reasons for going to the Sanctum were the same.

-That is what our journey must be, that is what we fight toward, together

Len and Enel looked from the top of a ruin, gazing at the Sanctum in the distance, having followed the green aurora that filled the sky of the world, with the aurora forming from a point above the Sanctum.

-Well, shall we go then.

Enel and Len rushed forth, the light green energy of the world wafting off their bodies as they ran, heading to their final destination.

Just a person who likes to turn thought into word.

More stories from Rafael M. Lench and writers in Fiction and other communities.