by Rafael M. Lench 11 months ago in Fantasy
Report Story

Like any day after the end, sometime bad, sometimes good, rarely special 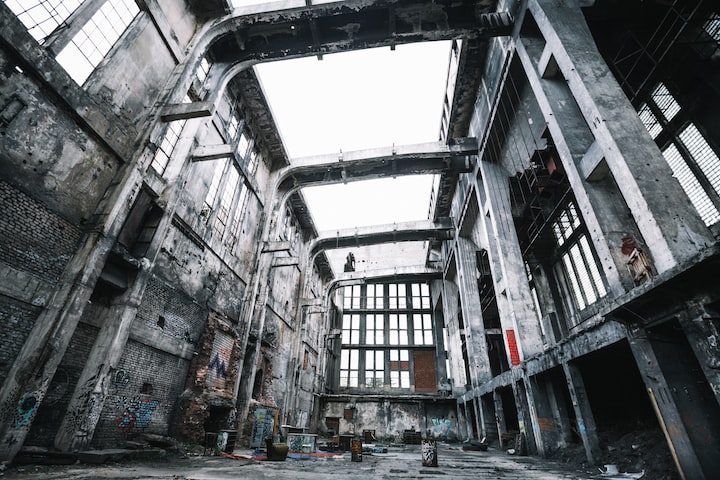 “Haah, Haah, haah, dang it where is that door,” the young woman stated, as she rushed through yet another dark hallway, the way forward only illuminated by a small flashlight, the sound of rattling and hurried footsteps also part of her frantic flight.

The violent mix of a shriek and scream echoed from behind the girl as her pursuer kept on her, the girl only briefly looking back, catching sight of the creature as it kept rushing down the hallways after the girl. The girl herself was forced to use more of her strength as she ran, due carrying a rucksack currently loaded with materials, materials that unfortunately were quite heavy. Yet the girl did not try to part with the heavy pack, even though the added weight was making it easier for the creature to keep pace and draw close, and as the girl ran down a particularly long hallway, the creature began to draw near, long, sharpened hands reaching out to grab the girl …

A blast of air and blinding light blasted from a small object the girl had dropped to the floor, the object appearing to be a small, ornate object that was two small cones connected at their base to a tube that had many depictions of stars, hearts and flowers that were carved into the tube, the object itself was roughly the size of the girls pinky. The blast of light and air that it produced were not as minute as the object, as the blast struck the creature, and blasted into a wall …

“At least I don’t have to deal with that anymore,” the girl stated, dusting herself off, but still looking down at where the creature fell, “though now I have to go all the way down to get its heart now.”

The girls eyes were drawn outward by the sound, looking out to the ruins of the metropolis, the buildings having largely rusted and become overgrown with greenery, the sight of rising smoke gave the girl a clue as to where the sound originated.

“There’s my next target,” the girl stated, turning to run down the hall, reaching the door she was looking for, which led to the buildings stair way access, which the girl used to run down the floors of the building, which was over twenty-seven, “whew, need some fluids, and some proteins, just wish it weren’t at the same time.” The girl reached into her pack and fished out a bottle of water, and a small brown packet, opening the packet and pouring a white powder into the bottle, closed the bottle and shook. The liquid in the bottle was now murky with an almost milky look to it, though the girl looked at it with apprehension, “haah, bottoms up,” the girl then drank the bottle, though with her eyes clenched and body shuddering as the thick liquid poured down her throat, though the girl kept going until the bottle was empty, “gah, god damn it still tastes awful no matter how many times I drink it,” the girl tossed the empty bottle on the ground, which joined the other random piles of garbage that littered the barren roads.

The body of the creature had begun to decay, leaving it unrecognizable, the whole body slowly shattering into dark black shards as the girl approached, yet one part did not break down. The girl stood over the corroding body, and saw what she looked for at the center of the decay, the heart of the monster, made almost entirely of the same black material as the rest of the corroding monsters body, thought material gave off a dull glow. The girl picked up the heart, wrapped it in fabric, and stuffed it into her pack.

The girl went over to her ride, a dirt bike that had a small motor slapped onto its frame that served to power the bike when the pedals were not enough, essentially a motorized mountain bike, and now the girl needed speed.

… the sounds of battle.

“I better hurry,” the girl said, hearing gunshots, explosions and powerful bursts of wind, while light also flashed in the night, the girl finally managing to catch up to the battle-!

A sharpened talon almost tore the girl in half as she avoided a much larger and obviously more violent version of the monster that she had killed earlier, the monster bearing a strong resemblance to a lycanthrope or ‘werewolf’, though the differences compared to a traditional lycanthrope were jarring, as the creatures skin had shards of black crystal jutting out along the limbs and torso almost appearing like armor, its head completely made up of the crystal and leaving only a loose cluster of eyes that resembled that of a spider just above a maw of sharpened teeth and hooked crystals, was roughly the size of a horse, and most disturbing of all …

… was the second body that was fused to the monsters back, with only the upper torso visible, the head covered in many eyes similar to the main head, covered in the black crystal that twisted the body in a horrifying manner, and -!

Two very long arms, one that ended in a clawed, long fingered hand, and the other swallowed in dark crystal and formed into what could be called a large, spiked blade, one that had almost taken the girls head off.

The girl managed to outrun the monster, and she found the source of the conflict.

“Looks like a just found a military convoy, and they look like they really need help,” the girl accelerated the bike as she approached the convoy.

The convoy was made up of four All-Terrain Vehicles (ATV), one Armored Personnel Carrier (APC), and a military transport truck with a single large container on its trailer, though there had been more as the girl passed a smoking ATV, the soldiers inside dead. The remaining vehicles were doing their best to protect the truck form a veritable swarm of the creatures, though with two different types of the monsters joining the first, with one type being smaller with no rider and less of the crystal, and the other just being a version of the first type without the second body. The vehicles fired back, though with a distinct lack of ferocity that would be found in such vehicles, as the shots were slower and focused on accuracy over firepower and mixed in with the shots from firearms were the whizzing of bolts from portable crossbows wielded by the soldiers, the bullets and bolts glowing with a pure white light as they shot into the monsters, causing the dark crystal to blow off and sometimes outright killing a creature.

“I am going to regret this,” the girl said as she headed at the convoy, grabbing another of the small objects she had used on the creature she had killed, and then drove straight at the convoy, pressing the middle symbol of the object and seeing it glow with white light, using the object to blow off the crystal armor of larger ‘rider-type’ creature along killing a handful of the smaller creatures, with the larger creature slamming to the husk of a crashed truck, though the truck received far more damage than the creature. The girl barely avoided another attack from another rider and barely dodged the swipe of the non-rider ‘assault-type’ that ran along with the group, though it soon lost its head to a Radiant bolt, and the girl acknowledged the soldier though obviously without a response as they were fighting for their lives.

“Whoa geez,” the girl swerved the bike to avoid the crumbling roadway, but was not quick enough as the road buckled, and the girl ended up falling onto the container as the transport and an ATV also fell into the collapsing road, falling into an underground highway tunnel that lay just beneath the road, the container coming off of the truck as it smashed into the street, destroying many already ruined cars as it went along, the ATV breaking apart and exploding, taking its occupants with it.

The girl managed to avoid suffering any major injuries minus a broken arm, but found herself now surrounded by the creatures, including a larger, and far more armored version that was double the size of the ‘rider-types’ and was more akin to a demon in how its body was completely covered in black crystal and had multiple sharp protrusions from much of its body, the head having a lance-like horn that it had used to destroy the supports of the tunnel and bring the road down. The girl was now terrified, and saw the massive creature roar and charge, the girl crawling back to the container, even though death seemed inevitable, but then …

A pulse of strong light seemed to be immitted from the container, the light strong enough to cause the massive creature to shatter into a pile of dark shards, with the most of the smaller ‘pack-type’s and half of the ‘rider’ and ‘assault-types’ also dying, with the survivors being left near mutilated and scorched by the unknown Radiant Pulse.

The container had been broken open, with the doors on both ends having snapped off in the crash, and from within was a faintly glimmering light, one that glowed a vibrant white. The girl entered the container, with the creatures outside not even daring to approach, and inside she found a what seemed to be a large chunk of dark crystal, and it was from a broken fissure in the crystal that the light emerged.

“There is something in there, something … bright?”

The girl could only wonder why she had these thoughts, but she knew that she needed to get whatever was inside the chunk out, and so she reached into the fissure, her hand soon grasping a metal object inside the chunk, and she pulled out …

It was a simple necklace with a metal chain, one that was infused with both black and white crystal shards, and on the necklace, was a single heart-shaped locket, one that was encrusted with white crystal and some black crystal at its edges. Yet it was when the girl opened the locket that the real surprise was known.

A crystal that appeared to be pure Radiant light in a solid form was with the locket, and when it opened the light with burst forth, annihilating the remaining creatures and causing those who came near to turn away and flee. The light became a soft, dull glow and the girl held the locket in hand.

“You,” the girl was stunned as the remaining soldiers came along with their commander, “who are you.”

The girl turned to him and spoke.

Just a person who likes to turn thought into word.

More stories from Rafael M. Lench and writers in Fiction and other communities.