by Wendy S Peavy 3 months ago in Short Story 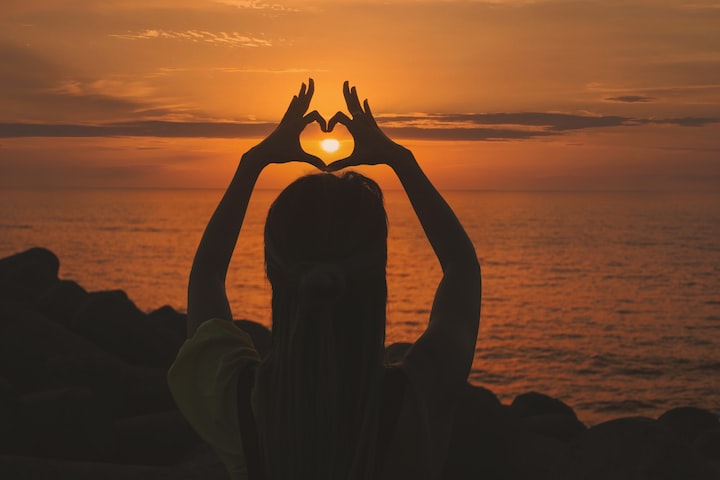 Danae awakened from slumber. A heart-shaped, golden locket on a broken chain clutched in her fingers. She gazed out at her surroundings; the room was dusty and filled with rubble, broken glass, and other debris. “What happened?” she asked, but no one answered, for she was alone. She lifted her head and felt an unfamiliar ache. Her fingers touched her face and came away slick with crimson blood.

Her memory was foggy—she had little recollection of the events that led her to this place, this situation. She remembered a man, but who was he? She sat up with caution. Her head swam, and she felt faint. Darkness crept in around the edges of her vision. She closed her eyes, took several deep breaths and opened them again, her vertigo now settled. A sunbeam shone through a broken window, the dust that hung in the air dancing madcap in the golden light. A quick self-review revealed no other apparent injury, but her head ached more in her vertical position.

When she had her bearings, Danae stood on wobbly legs. “Hello?” she called out, but no answer returned. She grabbed on to a rod of steel rebar that protruded from the floor, hoping to navigate the mess that surrounded her. Only twenty feet lay between her and the outside. She needed to understand what had transpired.

She stumbled over piles of broken concrete and shards of glass until her feet felt the grass just outside the building. Danae finally recognized her surroundings; a former office building, her place of employment. The atmosphere was gauzy, filled with smoke and dust. What had happened? Why was her life spared? Those questions burned in her mind like the small fires she saw in nearby structures.

Danae found an open area of grass and plopped down unceremoniously, her fingers still wrapped around the golden locket. With shaky fingers, she pried open the pendant and gazed at the photo inside. She recognized herself in the image, but the man with her remained a mystery. He had his arms around her. Both of them wore smiles. By deductive reasoning, she figured the man was a romantic interest. Who was he? Why couldn’t she remember him? Danae huffed in frustration and shook her head; she had so many questions and no answers.

In a building on the other side of town, a man awakened, covered in dirt and debris. Andy sat up and ruffled his hair with his fingers, pebbles, and small chunks of cement flying as he did so. His first thought was to call for help. He reached for his cell phone, but it was dead. The screen was hopelessly smashed and melted. “Dammit!” he growled.

He’d seen planes in the air moments before a blinding flash of light, but then his memory went blank. He stood uninjured, but confused. “What the hell is going on?” he said aloud. There was no noise around him; his surroundings were eerie and quiet. Only the occasional bird twittering or a dog barking echoed through the devastation.

Andy worked his way through the rubble and found his way outside. The pockets in his slacks jingled, and when he reached inside, he felt keys. The car! Yes! He’d get into the car and drive to his destination. But where would he go? If only he could remember.

Twenty paces away from the building from which he had emerged, he turned around to gain perspective on what had ensued. The city was razed, he had concluded, no doubt courtesy of the planes he remembered. He stumbled to the car and tried to engage the keyless entry. “This is dead, too?” he muttered under his breath. Andy inserted the key into the lock and twisted his wrist to open it. He opened the driver’s door with a loud creak and flopped into the leather seat. His key in the ignition yielded no result; the car was just as dead as his cell phone was.

He wasn’t sure why, but some unknown force beckoned to him, leading him to the downtown area. An untouched bicycle sat nearby—a chain held it to the remains of a road sign. With every bit of strength he had, Andy lifted the bike’s chain over the broken signpost. He caught a lucky break; the chain only looped around the bicycle’s frame and not through the spoked wheels. After a quick inspection, he determined the frame and tires were unharmed. With no clear destination in mind, he hopped on the two-wheeler and pedaled away.

Less than a mile from his starting point, Andy realized the bicycle was the only way of moving through the labyrinth of debris that littered the streets. The city looked, and felt, like a war zone—once proud buildings, now heaps of smoking rubble, vehicles tossed around like toys from the force of whatever had impacted the city. Acrid smoke filled the air, the stench of burning flesh predominant. Andy rode past a smouldering pile of debris, his eyes a silent witness to the bodies that were burning amongst the wreckage. It made Andy cough with croupy rasps as a wave of nausea washed over him.

Though he’d never seen dead bodies before that moment, the scene didn’t faze him mentally. He had one thought in his mind, although the purpose wasn’t clear. He needed to find someone or something. Andy knew he would recognize what he was seeking when he found it. The path he followed was familiar, but the landmarks he knew, the common sights and sounds, were now just silent cenotaphs to a world that was gone.

Danae was still sitting outside in the grass in a vain attempt to collect her thoughts. The sun was still high in the afternoon sky, though its light was weirdly obscured by the dense fog of smoke and soot. She opened the locket once again and squinted at the tiny photograph, straining to remember. “Who are you?” she thought to herself “Who. Are. You?”

The blood no longer trickled from her nose, and the pain in her head had receded to a dull drumbeat at the back of her consciousness. If not for the heat of the afternoon sun, she’d have wondered if she was still among the living. The burn of it on her skin confirmed that she was, indeed, alive and living through a nightmare of staggering proportions.

She stood and moved into the shade of a tree that still had most of its foliage, wishing she had a drink of something cool and clean. Something, maybe thirst, jogged a piece of her memory, and she remembered the water bottle at her desk inside the building. Danae closed the locket, its latch making a satisfying click as it locked shut, and Danae dropped it into her pocket. She turned her attention to the pile of debris that was her workplace and, aside from some shifting of small rubble and cascades of dust, she determined it to be sturdy. Danae walked toward the opening in the wall, close to the desk where she once sat, thankful she had a workspace close to the windows. She found her desk and reached into one drawer to retrieve her water bottle. A quick shake made the ice inside rattle, and a sigh of relief escaped her lips on a sharp exhale. She made her way back out to the clearing and rested under the tree, taking long but small sips of the cold water in the bottle. She closed her eyes, the locket once again in her hand, and tried her best to just remember.

Andy’s ride through the streets brought him into the downtown area. Seemingly Ground Zero—the devastation here was the worst he’d seen since he left the area where he’d woken up. He stopped the bike at an intersection and saw the remnants of a billboard, a pretty woman’s picture, smiling at him. A face flashed across his memory; a woman with long brunette hair, freckles and eyes the color of cut amethyst. The face of the woman he loved! “I remember!” A smile pulled his face, her name on his lips. “Danae!” he shouted. His hands formed a makeshift bullhorn around his mouth and he shouted again, desperate to hear a sound, but only the wind blowing through the debris answered him.

Now more determined than ever, he pedaled the bicycle faster, winding his way through the rubble-littered streets. He’d never seen the downtown area so empty of living, breathing people—there were plenty of the dead strewn about. He prayed to whomever would listen, that he would find his sweetheart, his Danae, not only in one piece, but alive and uninjured. The closer he got to the very center of the city, the more unlikely that scenario seemed.

Andy stopped to rest near a fountain that once had pristine, clear water, now polluted with filth and grit from pulverized cement. Though it was unfit to drink, he still reached into the fountain to wet his hands and splashed cool water onto his skin. He pulled his shirt from his body—the muscles in his chest rippling as he tugged at it. The shirt went into the fountain and back onto his body; the cold water on his skin was exhilarating. It was refreshing in the heat of the day, and just what he needed to continue his journey, another thirty blocks ahead.

What felt like hours later, Andy stopped the bicycle and tossed it aside. He stood in front of the building that was where Danae worked, now just as much of a heap of debris and destruction as every other building in the city. “Danae!” he shouted, the sky almost at dusk. “Danae! Sweetheart, where are you?”

Under the same tree where she sat and dozed off, Danae awakened at the sound of her name. At first she thought it was a dream, but the voice continued to call her name even as she became fully aware. She opened her mouth to speak, but only a dry rasp escaped her lips. The water bottle at her side had long been emptied. “Here!” she tried to say. She didn’t recognize her own voice, and she doubted whomever was calling for her would, either.

“Danae!” Andy called again, desperation clear in his plaintive cries. “You’ve got to be here, babyluv! You’ve got to be!!” From nearby, he heard a very faint voice. Definitely not the wind this time. The voice was crying “here…” but it was very weak and frail. He followed it nonetheless. Andy found the clearing and spotted a petite female figure propped up against the tree, face and clothes covered in ash and dust. But he knew, he knew!! He raced over to the tree, arriving just as the figure was collapsing. In the dim light, he could still see her face and the color of her hair. Danae! Relieved she had survived, he wept as he fell to the ground, cradling her in his arms. “You’re alive, baby, you’re alive…”

Danae studied his face—it was the man from the locket! She gazed into his eyes, caramel brown and so familiar. Weeping, she wrapped her arms around him, held him in her arms and whispered, “It’s you.” Andy kissed her hard, expressing a thousand different emotions in a single kiss. He saw the golden locket still in her hand and whispered.

“My sweet Danae, that’s the locket I gave you on our anniversary. I knew there was something leading me to you!” As they kissed more passionately, the setting sun caught the engraving on the outside of the locket: “I’ll always find you.”

Hello there! I am an aspiring author working on my first novel in the romance genre. I also write and manage two blogs. I have been married for 24 years to the same tolerant man, and we have two precious cats.