by Joanna McLoughlin 10 months ago in Sci Fi

all falls dark on Carrington Hill 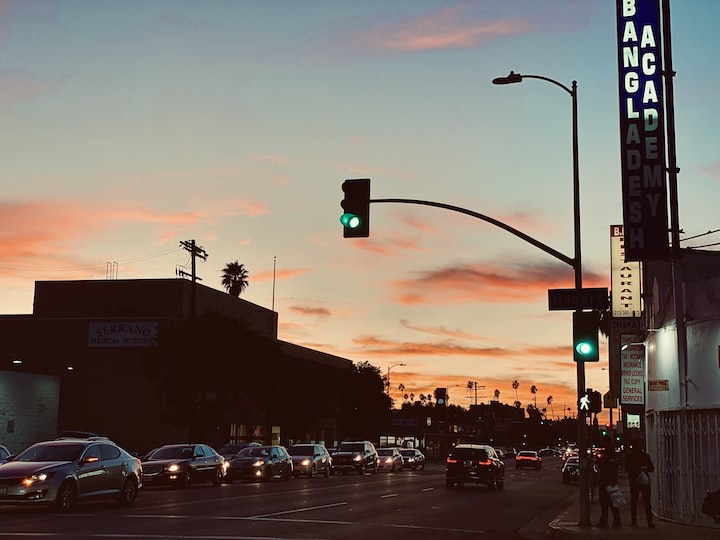 Photo by Yena Kwon on Unsplash

The lights at the top of the hill have been stuck on green for five days, and we know nobody is coming to fix them. They have better things to do, or at least we hope that is the case. A pipe burst at the bottom of the hill, and has started overflowing now, but nothing will change there, either. The broken windows in nearly every house on the street seem to multiply every time the sun rises. You would think that would let in more light; in reality, every day feels so much darker than the last.

None of the streetlights come on at night anymore, and none of the telephone lines have even a vague crackle to them now, there is no longer a humming from the substation. None of us could fathom how the traffic light stayed illuminated in its bold, lonely invitation to adventure, but it is clear it is the last light left. It seems such a weird coincidence that this unexpected lighthouse is the same colour that the sky turned nearly a week ago.

There had been breaking news alerts all day that the storm was coming, but our earthly arrogance was such that we had not really believed that much would change. Flares from the sun, electrical interference… it had just sounded like the mad rantings of a y2ker, or his tinfoil hatmaker friend. There were generators and backups and surely our modern surge protectors would deal with it? I am renowned for worrying about everything, and even I didn’t get anxious.

When the storm came, not only did it come fast, but it very quickly felt like the end. The sky changed through every shade of green my eyes could process, then every imaginable colour unexpected, dancing around us, not for a moment, but for hours that lasted longer than the days. The atmosphere was like magic, uncontrollable sorcery, possessing the sky, enshrouding every inch of existence. First, the world’s noise was replaced with sparks, flashes, explosions upon explosions, and then, blackouts, darkness, and ultimately came the most haunting silence.

It was such an overwhelming quiet, I realised our world had never truly been silent before. No phones, electricity, no connections left. No banking, no lights, no news. There were rumours things were being fixed slowly, but there was an ever-present fear that nothing would be, or even could be. We had no way to know. Calmness seemed to prevail while the beauty of the storm remained ever present through the sunsets and into the nights. Prismatic hues, so varied and comprehensive, exquisitely enshrouded around, and within, luminous cloud. The indescribable softness to this foreign light punctuated the dark stillness of empty roads, and juxtaposed with the lingering, sinister threat that the change had brought to hang at the end of every unfinished sentence.

There was nothing except the green traffic light at the top of Carrington Hill; it was where all prayer now focused, all hope looked to, and uncertainty had its brief pause.

We had started by gazing in awe at the start of the storm. We had joined hands and rejoiced at the preciousness of our finite existence, holding together in our hands our pure delight to have lived through those first moments of destruction. Pure naivety brought us a short-sightedness so secure in our own survival, we could not see beyond our own adrenaline.

Looting started shortly after. When the power did not return, no amount of stunning aurora could keep the fear at bay anymore. Every night the violence had become worse, both in quantity and severity. Every day we tried to find somewhere safer to stay than the day before. What was once life, had suddenly turned to gratitude, and then became survival, in far quicker succession than we could have predicted.

We were now divided into ‘hiders’ and ‘finders’. Maybe all the others were, too.

Time had become a slow, drawn-out horror in the absence of numbing and distraction. It was hard to believe only five days had passed since the event. In such a short time, we had been broken apart, from ninety-three million miles away, and become lost in our own homes; now, we were readying ourselves for a war simply to survive this new, horrifying, yet beautiful, darkness.

It is six o’clock in the evening and another night is coming. I don’t hear children laughing, or crying, even the dogs have all stopped barking. The sun has begun its journey into the horizon, and I have never felt such anger; I tremble with rage at the sky, where once I used to gaze with a wonder so innocent it cannot even be comprehended amongst these tears of frustration. Between clenched fists and jaw, I choke back the bitter remembrance of yesterday as I gaze up at the green light, feeling its ethereal glow mocking me with nothing more than a false invitation. I wanted to smash it, and to cherish it, in the same instant. To watch it shatter into a billion pieces, in the same way our lives had changed. Or, to revere it, as the last beacon, the last page in the book of what was once normality.

That one remaining light would fail eventually, and it felt that, too, would be the moment all hope would be extinguished.

///Thank you so much for reading my little story, please check out my others and leave me a heart if you like them! Sharing my work on social media really helps improve my reach and engagement and I'm very grateful for your Facebook shares <3///

\\\non-fiction on the wellbeing tip\\\

CW/TW for my fiction work: often contains violence and may contain references to trauma/dv/assault

More stories from Joanna McLoughlin and writers in Fiction and other communities.