by Caitlin McColl 5 months ago in Series
Report Story 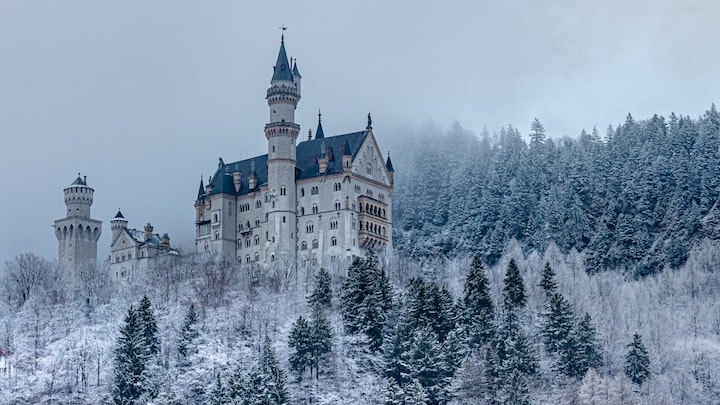 Photo by Lanju Fotografie on Unsplash

Please check out the other parts of the series. The links to each of these chapters is at the end of this story.******

Part I Beyond the Boundary by Lena

Part II To the Realm Beyond by Dannielle Nelson

Part III From the Realm Beyond the Boundary by Lilli Knight

Part V In the Beginning by Abby Draper

Part VI Destiny Beyond the Divide by Gerald Holmes

Part VII Beyond The Truth by Tyrone Livingston

Part VIII and IX Boundary Be Gone! by Cindy Richard

And now the finale:

❄️ The End Is the Beginning

I look down at the boundary from my vantage point high above - the invisible barrier that men have made in this world to separate them from the unknown. They do these things, strangely. Hole themselves in, out of fear, not wanting to leave the comfort zones of their villages, the people and things that are familiar to them. They think there are monsters there, beyond the boundary, the barrier. But there are none, not really. The things that they whisper about that live in the forests, that they call the Iblis, are just their own fears made manifest. They are just smoke and mirrors. Things that only get to them if they let them. Otherwise, they are harmless things, more afraid of men than not. But the men are too afraid of them to notice. They don’t stop and notice. They let their fears get the best of them, and ravage their bodies and squeeze their hearts until they stop. They are demons of the mind, and heart, the Iblis. Ephemeral but no less real.

The Sickness, Ikora, has been dealt with. She was a mistake. One that I regret. I wish she had listened to me. But alas…she chose the wrong path and allowed it to corrupt her. Her need for power overwhelmed her and she allowed it to leach out and infect the hearts and minds of men, who are so susceptible to such things, sadly. Another mistake of mine, making them so fragile that their minds can be turned on them like that. They are strong and resilient in so many ways, except the mind, it’s what fails them, in the end.

I watch as King Auron takes that poor boy Failon, the so-called warrior of Raya, captive. He who the one that the girl that everyone thinks of as the warrior princess, Saraya, has such an affinity for. I am disappointed by the nature spirit, the cat-man they call Ish-ha, that is under the command of the King.

I watch as Saraya destroys the one who thought of herself as the Sickness with the waters from the springs. Disappointed, slightly, that her ending is so swift, so simple. Water, that cures all pure of heart and kills those who aren’t. Nature has always had curative properties. It’s how I created the world to be. I observe as she races towards certain peril with Savaric by her side - Savaric - who I created from the life of the earth, before Ikora’s evil drained the life from the land.

I find it curious that she has named him Akis, and why he hasn’t supplied his name to her. Akis, the word means protector. It is an apt name on the surface, of course. But Savaric, his true name, his true nature, means The Beginning. He was the First of All. He who was the first of those who were supposed to rule the land, the man-beasts, not the full fledged people. The people were an afterthought. They were to be under the purview of the were-beasts. Like Savaric, like Ish-ha, Savaric’s soulmate, whose name in reality is Magumo, or The End. You have to have an Ending if you have a Beginning.

I’m not entirely sure of my thoughts on them, the men, the women, the little versions of them - the resilient villagers even still, after all this time. Though they are admirable. It is endearing that the people of the lands I created keep hope in their hearts and minds, naming their villages so that they never forget.

I marvel at the one called Khione, and his people. Khione with his little beast Vulpes, which he thinks is a canine, but really, it is one of the First. It can turn into a man-like form just as Savaric and Magumo. Khione that everyone overlooks, that they don’t see much in. That they think is just a silly boy with big dreams and big ideas of saving the world.

They have always thought that Saraya is the savior in all this, of the people in this world. I find this humorous, I must say. Why are people always so blind? They never see the true heroes. They see those that have been prophesied and can’t see beyond that. They place all their hopes and dreams in a straw man. Or woman, in this case.

I watch with trepidation as Saraya arrives on Savaric’s back, cringing that he has reduced himself to simple transport of the people his kind are supposed to rule.

I watch as she charges in with her flask of the Mist of Curae and her necklace imbued with the hopes and prayers of her village. She thrusts her necklace into King Auron’s face with no effect and throws the waters of Curae on him. I watch as the King laughs cold and mirthless, as only someone like him can, and he signals his men, and Magumo. My eyes lower. I don’t want to watch as she gets cut down by the King’s men as effortlessly as a stalk of wheat in a summer field, as the boy Failon watches on helpless, his screams rending the air as her eyes turn as cold and glassy as the snow and ice that surrounds this kingdom. How men can be so fickle, I will never understand.

But now, I raise my eyes once more, avoiding the lifeless form of Saraya, bringer of hope, as the villagers of Khione’s town arrive with bluster and pomp.

But Khione himself heads up the rear, unassuming, almost invisible, shrinking back. He doesn’t have the confidence of the other villagers.

But I can see, even from up above, I can tell he knows the reality of the situation. What he, and the rest are up against.

I look for The Beginning. For Savaric. I cannot see him. I can sense him of course, but he has disappeared from view, even from me, which is odd, seeing how I created him.

I see Khione, bringing up the rear of the angry mob of villagers, trying to overthrow the King of the Wastelands. It is valiant. But his companion, Vulpes, is conspicuously absent as well.

I am not sure what to think. What this means, that the First of All are no longer visible to me. My eyes rove and search for Magumo, The Ending. I can no longer find her either, and this unnerves me. I can sense the three of them, the Firsts, but that is all.

Khione pauses at the threshold to the King’s fortress. I can sense his trepidation, his unease, and rightly so. After all, he is heading to his death. That and the other villagers.

Then, what’s this? Something I have not foreseen. A flash of fur, and another. And a third. It is who I created to start the world and make it what it is. They dart so quickly it is all a blur. The kingdom is filled with screams of terror and pain and the agony of endings.

And then there is silence. Utter silence so still and quiet it has gone beyond silence. There is no movement. There is nothing.

I fear it is the end of the beginning. What has become of the world I created?

I watch, and wait, and wonder.

I hope you enjoyed this collaborative fictional story!

Go here to start the journey from the beginning: