by Meliha Avdic 6 months ago in family
Report Story 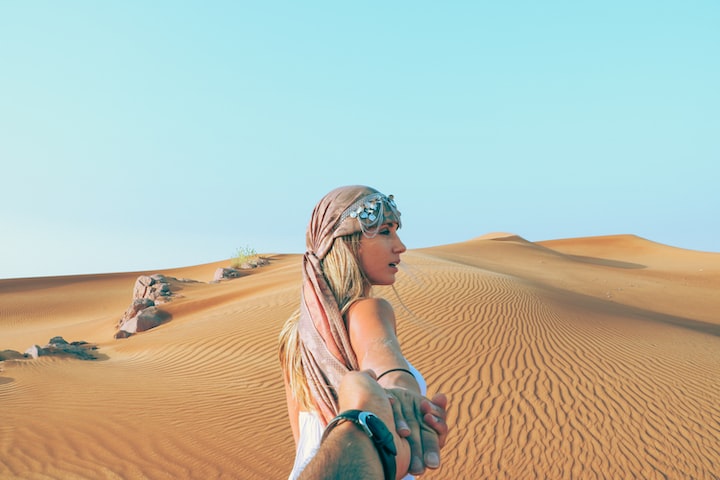 Photo by Valeria andersson on Unsplash

Sarah loved going to see her grandma, not only because she loved spending time with the old lady who was never too busy for a game, but also because aunt Alissa’s room was at grandma’s house. Aunt Alissa travelled a lot, but whenever she came home, she came to live with grandma in the room filled with all kinds of pictures, and photographs, and books, and all sorts of little ornaments. Sarah loved to just look around even when aunt Alissa wasn’t there. And when aunt Alissa was there, the room came alive with all her stories.

There was nothing Sarah enjoyed more than to spend the night at grandma’s house while aunt Alissa was there because aunt Alissa was allowed to touch anything she wanted in that room of wonders. And every time she picked up something, Sarah knew there was a good story to go with it.

The little porcelain deer, made in a sleepy position, curled into its own body, was a tale of a country called Norway where there are magical northern lights that come down from the sky like a rainbow-coloured curtain. It snows a lot in that land, so everything always sparkles in white snowflakes like little diamonds. People there are warm and calm. They like to tell stories around a fire, and they always wear big scarves.

On the shelf above the little deer was a small green woman, wearing a dress and a crown of some sort, with her whole arm stretched up, holding a torch.

“That’s New York,” aunt Alissa said. “That’s called the statue of liberty and it was a gift from France, Paris,” she went on while picking a strange-looking, pointy object made of wires.

Even though the object was boring, the story of love and endurance behind it was very interesting. But, no matter how interesting a story was, Sarah always wanted more. She’d pick another object, another ornament, or point at a picture and ask about it, and aunt Alissa always had a story to tell.

The hula girls who dance like the waves of the ocean.

The celebration of colours and victory of good over evil.

Somewhere there’s a desert called Sahara that was once a glorious garden, now it’s a reminder.

And the lions, and giraffes, and the hippos.

And down under there are koalas that hang on trees, and kangaroos that carry their babies in a pocket.

And the big wall, and the large forest, and the jungles with best smelling flowers.

One story after another made the world sound great. And it wasn’t just the stories, but also the plays. Aunt Alissa would take out clothes and jewellery and put them on Sarah, and they’d pretend they were attending a party in Spain, or they’d go dancing in India, China, Turkey, Austria, Morocco or Brazil. Then they’d make perfumes in Tunisia, or a sweet dish in Swaziland, or a big bar of chocolate in Switzerland.

Aunt Alissa brought stories of love from where ever she’d go. Stories of people unique yet alike in their struggles and victories, sorrows and celebrations.

One day Sarah asked about a frame on the top shelf that she couldn’t reach. Aunt Alissa stretched and brought it down to Sarah. It was even more beautiful up close. It looked like a bunch of little flowers arranged into a perfect circle. They were made of metal but painted so carefully, the flowers looked almost real.

“This was given to me by an old lady, a witch, in Ireland. She said I must keep it empty until I find my one true love,” aunt Alissa smiled, but it was a strange kind of smile, nothing like the other smiles Sarah had seen so many times on her aunt’s face. “She said that when I put our picture in this frame, I will always be safe in his heart,” aunt Alissa place the frame carefully back on the top shelf.

As the years went by, Sarah would sneak in a question about the frame. Aunt Alissa replied, always with that same smile, the one mixed with sorrow and hope. The stories of all other ornaments changed a little, or at least grew in terms of details, except the story of the empty frame. That one stay the same no matter how many times aunt Alissa repeated it.

When Sarah was nine years old, aunt Alissa was returning from her trip to a country called Botswana. By then, it had become a tradition for the latest stories to be told first. Sarah could barely sleep the night before her aunt returned. The excitement was too much to bear. What gift will she bring back with her now? What story will go with the gift? What kind of game will they play?

In the morning, Sarah jumped out of the bed the moment she opened her eyes and saw the light. She ran out of her room into the living room. She was about to urge her parents to get on with breakfast and to drive her to grandma’s when the sight turned her into a sculpture. Both her parents were crying.

Everything became slow; the way her father called her to sit next to him, the way her mother smiled, the way Sarah moved, everything was burdened with an invisible yet great weight.

“Are we going to grandma’s?” Sarah said impatiently.

“Yes, but I will go first, you’ll come later with your mum.”

“Why?” Sarah began to cry. Why couldn’t she go and meet aunt Alissa as soon as she arrives? For many years, this has been more exciting than anything else, including birthdays.

But Sarah couldn’t come. In fact, she spent the whole day waiting for permission to go to her grandmother’s house, permission that was granted only the next day. Sarah never needed permission. Then again, she never heard of police being at the house, or that grandma had to go to the hospital. It was all going from bad to worse, yet no one would say what’s happened.

Weeks passed. Aunt Alissa’s belongings arrived in a small box. Sarah was there. Her father took time off work to take care of grandma after she came out of the hospital, and Sarah had nowhere to stay, so she came with her father.

Inside the box was a scarf that aunt Alissa always had with her. She told Sarah that scarves are great because they can be worn if your clothes get wet, or if you get cold, or if it starts to rain you can use them as a cover, or you can even sit on them for that extra comfort. The scarf aunt Alissa always carried was covered in blood.

The necklace Sarah made for her aunt only a year earlier also had blood on it, as did her notebook and pen. Photographs were protected in a small plastic box. Inside the box were the last photos of aunt Alissa. One of the photos was cut into a perfect circle.

Sarah run to aunt Alissa’s room and climbed up to fetch the frame. The photo, cut to fit into the frame showed aunt Alissa kissing a man on the cheek, while he smiled, his nose cringed, his arms around her waist. Sarah placed the photo in the frame and hid it in her bag.

No one ever asked about the frame, and Sarah never told anyone about it. She kept it safe like the most valuable possession, the greatest secret she ever had.

Fifteen years later, when Sarah was 24 years old, she went to Botswana to find the man in the photo, ‘her uncle who got away,’ she’d say jokingly to her friends to hide her pain.

In Botswana, Sarah expected a great story from the man who kept her aunt safe in his heart. She wished for a revival of her aunt’s spirit and the world her aunt created in her stories. But all Sarah found was a grieving man who tried to live the best life he could despite the sorrows he endured. In some ways, it was even better than what she expected.